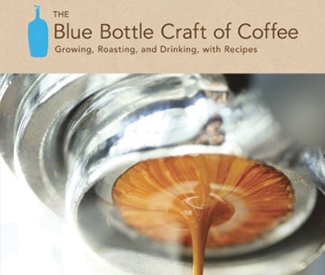 LIT A harvest of cookbooks, some set for release in the fall, some ready for your shelf, cupboard, or bar hot off the press.

THE BLUE BOTTLE CRAFT OF COFFEE: GROWING, ROASTING, AND DRINKING, WITH RECIPES

Since its first kiosk opened in January 2005, Blue Bottle has been my first choice in coffee, from ethos (served immediately, individually brewed, beans sold fresh after roasting) to taste. Musician James Freeman dove into coffee after being laid off from a corporate job post-9/11: the inspiring story of how he began is detailed in this book. Written with his wife, Caitlin, and James Beard-nominated food writer Tara Duggan, with photography by Clay McLachlan, Craft contains sections on global growing regions, roasting, cupping, pour-over, siphon, espresso machines, and multiple techniques. Caitlin, resident Blue Bottle pastry chef and former owner of Miette, contributes more than 75 pages of recipes — not so much utilizing coffee itself, but including breakfast recipes to go with morning coffee from Blue Bottle cafés, desserts and treats for dunking, and recipes from chef friends like Stuart Brioza of State Bird Provisions’ tuna melt with piquillo peppers. Although Blue Bottle has now gone nationwide with New York locations, these pages allow one to wax nostalgic over this Bay Area success story bringing us all better coffee. To be released October 9.

Chicago resident James Teitelbaum wrote the kind of book I would happily pen, the first I’ve seen to detail the world’s best craft cocktail bars. Destination Cocktails (www.destinationcocktails.com) is a cocktail aficionado’s trusty guide to destinations both obvious (NYC and SF) and overlooked (Reno and Cleveland). As for the international scene, the book runs the gamut from Wellington to Edinburgh. While there are a few missing great drinks and bartenders — and info can change so quickly, even since Destination‘s September 1 release date — Teitelbaum’s book offers a comprehensive collection that would set any budding or well-traveled cocktailian on the right path. From London (Worship St. Whistling Shop, 69 Colebrooke Row) to Denver (Williams & Graham), many of my global tops are highlighted, alongside cities and bars I’ve been hankering visit (ah, Tokyo!)

By Shelley Lindgren and Matthew Accarrino with Kate Leahy

A beautiful, visual tribute to Italy, local restaurant SPQR releases a book by its wine director, Shelley Lindgren (also of A16), and executive chef Matthew Accarrino with Kate Leahy. The book features eight regions of Italy, each influencing creative recipes from SPQR’s kitchen and from which Lindgren chooses wines. Her essays explore lesser-known producers and varietals succinctly but with depth. Accarrino’s artful skill with Italian cuisine may not appear easy for most of us, but there are tips and photo breakdowns of recipes, small animal butchery, and pasta-making. Photos by Sara Remington inspire with a romantic eye tempered by realism. To be released October 16.

At a recent intimate gathering at Coi, I was privileged to spend time with Tama Matsuoka Wong, forager for Daniel restaurant in NYC (Daniel Boulud wrote this book’s forward), sampling bites made with ingredients she’d foraged with Coi staff while visiting the Bay Area. We celebrated Foraged Flavor, released earlier this summer. I learned of her career change from lawyer to forager in New Jersey (my former stomping grounds), where her three daughters are involved in her foraging and cooking lifestyle. The book’s clean, classic layout includes botany-style plant diagrams, seasonal groupings, and approachable gourmet recipes like dandelion leaves with poached eggs and bacon. There are foraging and growth tips and info on key characteristics of each wild plant.

COOKING OFF THE CLOCK: RECIPES FROM MY DOWNTIME

Longtime local favorite and Top Chef Master star Elizabeth Falkner recently moved to NYC and released her second book August 28. As a James Beard-nominated pastry chef, her first book, Demolition Desserts, focused on the sweet side, while new Cooking Off the Clock is a volume of everyday, accessible recipe favorites. There are sections on condiments (kimchee, tahini sauce), flavorful salads, playful snacks (three types of hot wings: Moroccan, Tabasco-honey, black bean-sesame-ginger), a few of her beloved desserts (two versions of cherry pie), and pizzas, including her amazing pastrami version — like a Reuben pie, with Russian dressing, shredded cabbage, and thinly-sliced pastrami — which I never forgot from her restaurant Orson.

Sherri Dobay feels like a kindred spirit… although young, her romantic, sensual verbiage communicates that “old soul,” the kind of view with which I’ve seen the world since girlhood. Food, wine, art, nature, horses (she’s a rider) are her subject, and she is as inspiring as she is comforting. More memoir than cookbook — and published in a format that’s hard to open while working in the kitchen — the book’s draw is its tone, not its recipes. Sections are grouped around themes of decadence (Divine Decadence, Decadent Simplicity, Decadence of the Seasons, Decadence of Letting Go), and wine recommendations are explored from a right-brain perspective rather than thorough analytical tasting notes. Reading bits of the book at a time is like a sip of crisp, refreshing wine.