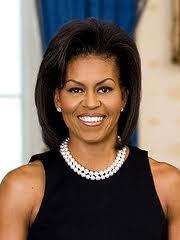 You couldn’t have scripted it better (and that’s what it was, carefully scripted). The contrast between the mayor of San Antonio, Julian Castro, grandson of immigrants, child of a working-class family, and the first lady, Michelle Obama, daughter of a disabled blue-collar public employee, teling their life stories just reminded everyone about the life of that other candidate. Yeah, the one who told students to borrow money from their parents to start a business.

Castro was good because of who he is, and he’s a fine speaker, and the HuffPo  thinks he’s been vaulted into the national spotlight, but this wasn’t a speech that’s going to change anyone’s life. Not like the keynote eight years ago. It was good campaign speech, some nice slaps at the Republicans, and a good line: The GOP wants to take back America — back to what and to when?

But Michelle Obama stole the show. I was listening in the car with my daughter, on the way home from her gymnastics class, and Viv — who generally tolerates nothing on the radio except Katy Perry and Lady Gaga and Kesha and J. Lo and like that — was actually quiet for a few minutes, and at one point asked me the same question I was asking myself:

Why isn’t she the president?

But she isn’t and her husband is, and we all have a lot of issues with him, and I’m not here to defend this administration. But the stark contrasts between the candidates and the conventions can’t be ignored. Davey D, who’s doing an awesome job of covering both conventions, talked about walking around the RNC and not seeing any black people (Colorlines looked carefully and found exactly 89) and from his perspective (and he’s certainly not a Democratic synchophant) the DNC was worlds away.

By most accounts, Mitt Romney didn’t get much bounce from his nomination speech, but most accounts — that is, the national polls — mean very little at this point. The next election will be won or lost in about six swing states, and the GOP clearly thinks it will be a “base” election, that there are enough right-wing types in those states to make the difference if they’re motivated. I don’t know if Obama can say or do anything that will change that.

But for those handful of undecided voters, most of whom are not rich, the Dems have a tailored message. And so far, it’s working well.