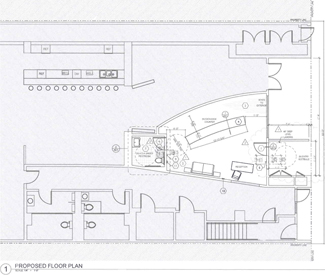 HERBWISE Though I’ll admit the waves of federally-mandated dispensary closures that have washed over the Bay in recent months make it hard to keep in mind, I can’t shake the feeling that the key to legalization is not burning effigies of US Attorney Melinda Haag and harassing Barack Obama when he comes to town. Though those things can be fun.

These nonsensical days of the government blocking our access to cannabis will only stop when regular old citizens realize that the War on Drugs is not making them any safer.

Which is why I’m talking to Kristina Barnes about her porch rowdies. The mother of two, who is a project manager for an energy conservation company, moved to the Mission a year and a half ago. Along some of her neighbors and an agent from the Mission Miracle Mile Business Improvement District, Barnes wrote a letter in protest of property owner Gus Murad’s plan to put a weed dispensary into part of the Mission Street building that until recently housed his restaurant Medjool.

The letters were sent to the city’s Planning Commission, but also to Haag, causing East Bay Express reporter David Downs to call Barnes and her crew “snitches,” and “clueless, craven, money-hungry carpetbaggers,” whose primary goal was to gentrify the Mission. One of the letters, he reported, even used what I like to call “the g-word,” as a positive term, calling into question the protesters’ basic grasp of SF’s social climate.

Fine, I chortled a little at the snitches part.

But I live really close to Morado Collective’s proposed site. It troubled me that my neighbors thought that “this shop will invite loads more undesirable people to our neighborhood,” as Barnes’ letter put it.

The perception of the pot clubs as a dangerous, disruptive place is sadly, common — Haag has used it as justification for her crusade, even though a UCLA study published in the July issue of the Journal of Studies on Alcohol and Drugs found zero evidence that dispensaries raise crime rates.

I needed to know where the negative image was coming from. So I called Barnes up to find out why she didn’t want high-quality nuggets near her family.

Turns out, Barnes does not support medical marijuana. “There’s a lot of misleading legality about it,” she said. “If I were to guess, 80 percent of the people [who frequent dispensaries] have no reason to be there.” In other neighborhoods, she told me, she’s seen people exit clubs and give joints to friends.

She thinks the Morado Collective will adversely affect her block. “My primary concern is that it’s really selfish,” she told me. “We moved into a neighborhood that has the promise of getting a little cleaner and better.” More saliently, she was concerned that her porch would look like an attractive place to smoke that newly-purchased bud. People use it as a smoke spot already, she said.

Of course, there was no reason to base this conversation on conjecture. Until it was shuttered by the feds earlier this summer, Shambhala Healing Center welcomed patients at 2441 Mission — across the street from the Morado Collective’s future home. (The dispensary is now delivery-only.) Had Barnes’ porch been inundated by Shambhala’s patrons? Had such disruptions diminished in the months since the club closed its doors?

Actually, she was unaware that she’d been living around the corner from a dispensary since she moved to the neighborhood. Granted, Shambhala looked like a yoga studio from the outside. “I can’t believe I didn’t know the other one was there,” Barnes said. It was unclear if this fact was enough to affect her views on disruptive dispensaries, but one hopes it was food for thought.

While researching this column, I also spoke with Philip Lesser of the MMMBID, who told me his neighborhood group was firmly in favor of medical marijuana, likening pot clubs to medical centers. But, he said, the Morado Collective’s spot between fancy restaurants Foreign Cinema and Lolinda “just doesn’t seem like the appropriate place to have a doctor’s office.”

What would be appropriate? “I’m thinking that anything that could better promote the arts and entertainment,” he ventured, adding that Alamo Draft House is set to open a five-screen movie theater in another Murad property across the street.

But — what makes you want to go to the movies more than weed?