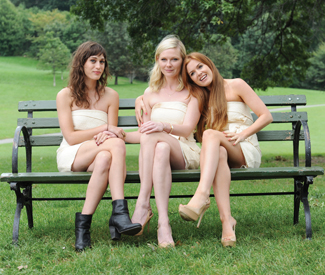 FILM A movie called Bachelorette is inevitably going to be accused of riding Bridesmaids‘ coattails, even if — as it happens — Bachelorette‘s source-material play was written years before the 2011 comedy hit theaters.

A coincidence, to say the least, but also a hat tip to the zeitgeist. Bachelorette‘s title evokes not just Bridesmaids, but also TV’s wretchedly addicting The Bachelorette — as well as the wedding-industrial complex, which remains at frenzied heights, recession be damned (I blame Pinterest).

Imagine Young Adult‘s Mavis broken into three parts, stripped of her complexities but with her bad habits intact; you’d more or less have Regan (Kirsten Dunst), Gena (Lizzy Caplan), and Katie (Isla Fisher). A decade ago, they were the popular “B-Faces” at their high school and haven’t matured much since. Competitive Regan is a Type A blonde; Gena’s the queen of one-night stands; and Katie’s a self-destructive party girl. All of them are pushing 30, and though Regan’s the most functional among them, she’s the hardest-hit when she learns that Becky (Bridesmaids‘ Rebel Wilson), always treated as a second-tier B-Face by virtue of being plus-sized, is engaged. “I was supposed to be first,” Regan wails via three-way cell call to Gena and Katie, who’re sympathetic to this sense of entitlement.

The wedding is a fancy New York City affair, so the B-Faces reunite for what they think will be a bachelorette party for the ages. Most of the film takes place during that single night, a madcap, coke-fueled, mean-spirited spiral into chaos that puts Becky’s wedding dress in peril and sees Gena sparring with the high-school boyfriend (Adam Scott) she’s never forgiven or forgotten, Katie OD’ing, and Regan locking horns with the irritatingly hot best man, who also happens to be a complete douchebag (James Marsden). Nothing that transpires is as funny as the high points of The Hangover (2009), though Bachelorette is unafraid to match that film’s raunch factor.

That’s not to say the film lacks any laughs. The scenarios they get themselves into may be exaggerated, but the women themselves often feel unusually true to life. Headland’s dialogue sounds like real people talking (overlapping, snarking), and the script is loaded with 1990s pop-culture references, which makes sense, since the characters are nostalgic for their teenage glory days. Bachelorette also delves into thornier issues — eating disorders, unplanned pregnancies, drug abuse, raging jealousy — that groups of close female friends often grapple with.

However, it’s a problem for the audience when nearly every character is utterly unlikable. Headland’s play was written as part of a series on the deadly sins (Bachelorette was for “gluttony” — obviously reflected in Becky’s weight, but also Katie’s pill-gobbling, Gena’s sluttiness, etc.), and it’s one thing to see a satirical comedy play out onstage. The actors are there in front of your eyes: intermittently hateful, but living, breathing, and palpably human. Blown up to movie size, there’s nothing to temper the toxicity of the characters; even on the small screen, where Bachelorette proved to be a popular On Demand pick prior to its theatrical release, their awfulness can be agonizing.

Back to inevitable comparison point Bridesmaids: sure, Wiig’s hapless maid of honor was prone to cringe-inducing episodes (dear god, the airplane scene), but Bridesmaids took the time to explore the reasons behind her outrageous behavior. Her character was shaped by, not completely defined by, her failings, and through all her fuckups she remained sympathetic. Her sweet conclusion was cheesy, but she’d earned it.

Bachelorette‘s leading ladies are amusingly vile in the moment, but the movie’s so pleased with itself for being “edgy” that its own last-act attempt at sentiment rings jarringly false. Young Adult didn’t need a happy ending, and neither does Bachelorette, a film that would’ve been better served by sticking with its rallying cry: “Fuck everyone!”