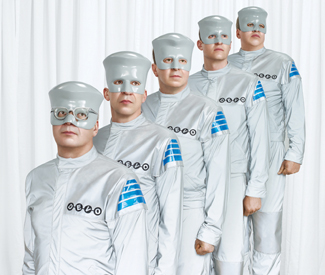 MUSIC Mark Mothersbaugh wants to devolve. “I would love to be 20 right now. Kids now have cell phones that have more power than the Beatles had when they recorded their first album. You don’t have to go through the whole gauntlet of getting on a record company.” We’re looking back since Mothersbaugh’s band Devo is currently touring again with Blondie. The two bands haven’t played shows together since 1977, when Devo — on the East Coast for the first time, at Max’s Kansas City and CBGB’s — was an unsigned, pop avant-garde band fresh out of Akron, Ohio.

“As a kid, I’d wondered, how do you get on the other side of the moat? How do you get to be on the side with the castle that has the recording studio? It seemed so impossible when i was a kid and now it’s a non issue.” Mothersbaugh is speaking from his own “castle,” his Mutato Muzika production company on the Sunset Strip.

A multimedia artist, Mothersbaugh has made a solo career in soundtracks. Pee-wee’s Playhouse started the trajectory, and his work on Rugrats and most Wes Anderson films cemented a reputation as a go-to-guy for quirky, slightly off-center scores. (Rivaled only by Danny Elfman.) It’s a different lifestyle, being in the studio, chasing a lot of deadlines for film companies. His recent work includes 21 Jump Street, Safe, and Hotel Transylvania. Evaluating the success of a project, he seems to look to the box office. “What to Expect When You’re Expecting,” he says, “was Lionsgate’s follow-up to The Hunger Games, so it wasn’t as big as their other one.”

If Mothersbaugh looks at the industry shrewdly, it’s for good reason. For much of the last two decades — while still performing at cherry picked festivals and events — Devo was on a recording hiatus. “Dealing with record companies, quite honestly, just became a burn out and made it not fun to be an artist,” Mothersbaugh says.

“At the time cassettes came out, I went to Wexler, the President of Warner Brothers and said, ‘I read something in Variety, it costs you guys more to make an audio cassette than to make an LP, but you deduct 35 percent of my royalties when you make a cassette instead of an LP, instead of letting me share the profit. Why is that?’ He just smiled and said ‘Because that’s the way it is.'”

It’s fairly telling about how labels treated musicians that this is coming from Mothersbaugh. Formed in the aftermath of the Kent State shooting — where the idealism of the ’60s suddenly devolved — Devo took a decidedly anti-punk approach, trying to change the system from within. Mothersbaugh recalls seeing Pachelbel’s Canon turned into a Burger King jingle and being inspired. “I just remember thinking that was evil genius at work. Rebellion isn’t how you change things. It’s through subversion in this country. And who did it best? Madison Avenue.” (Devo would in turn appropriate the BK jingle as lyrics to “Too Much Paranoia.”)

A band that wanted to be a brand, part of Devo’s strategy has been embracing commercialism and infecting it. “For us every time one of our songs got in a commercial we thought there was a chance that some kid would hear the song later on somewhere else and think, what is that song actually about?” An early plan (taking cues from Andy Warhol’s factory) was to send out groups of kids to perform. It actually came about in 2006, as Devo 2.0 on Walt Disney Records, but in the pre-MTV era, it just puzzled execs. “It was hard enough to talk them into letting us make our short films,” Mothersbaugh says.

Today Devo is re-energized. In addition to finding time to tour, it picked up where it left off with 2010’s return to formula, Something for Everybody, a candy-coated pop album with a cynical filling. The timing was right and everybody — the two sets of brothers that make up the band — wanted to make another record. “And probably more than anything, it was Alzheimer’s,” Mothersbaugh says. “We forgot what it was that made us stop.”