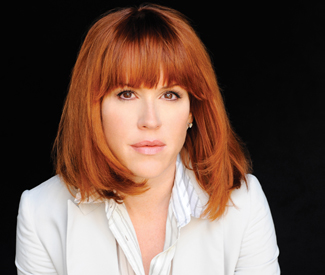 LIT Molly Ringwald is 44, fabulous, and living a dream life in Santa Monica with her gorgeous husband and three daughters. She’s also far from shy when it comes to talking about her storied past as an 1980s movie legend, the red-headed dream girl of choice for a generation of disaffected teens.

No, she didn’t have anything to do with designing Andie’s prom dress in Pretty in Pink (1986). Yes, director John Hughes almost fired Judd Nelson from The Breakfast Club (1985) for being mean to her (Nelson was staying in character). And — sorry those of us who spent hours pushing our boobs together — she cannot put lipstick on with her cleavage. That was “movie magic.”

Also? The quote she gets most on the street is “What’s a-happenin’, hot stuff?”

Ringwald is hot stuff for something else right now. She’s just released When It Happens to You: A Novel in Stories (It Books, 256 pp., $24.99), a debut novel comprised of linked short stories that’s been garnering raves. (She’ll be appearing courtesy of Litquake at the Verdi Club, Thu/6.)

The book deals with the dissolution of the marriage of Phillip and Greta, and the unsettledness that ripples through their family and friends. It’s a naturalistic mosaic of betrayals, full of lovely observations of contemporary human behavior and well-wrought passages that jibe with her love of Gustave Flaubert, Raymond Carver, and poet Mary Oliver — yet still reveal a voice distinctly her own.

The promotion she’s been doing for the book has been revealing too: her sharp wit and playful literary intelligence have had many realizing how much they’ve missed her. (Example: She basically slayed all of Reddit during a community interview when she casually mentioned that she drinks the blood of Kristen Stewart to stay young.) Ringwald called me during a tumultuous morning at her household: her twins were starting their first day of preschool, and she was getting them ready to go. She briefly put one of them on the phone with me, who told me she was excited about her “new backpack and pink nail polish.”

San Francisco Bay Guardian Um, I just talked to one of Molly Ringwald’s kids — that’s kind of a weird time warp for me.

Molly Ringwald Ha, I can see that. Are you OK?

SFBG A bit dazzled, but I’ll survive. Another time warpy thing is finding out how much you’re a self-described “Internet junkie.” I feel that I and so many others connected with your ’80s movies because we were so isolated as weirdos and outsiders. Those movies were like the social networking of the time — not in terms of actually communicating with others like ourselves, but just knowing there were people like us out there …

MR I’ve never thought about it that way, but I certainly know how the presence of the Internet has changed the lives of young people now, which has so much to do with reaching out but also moving forward, always going on to the next thing. My children are Internet natives. And I have to limit myself because I can just dive in to all the distractions. I’m fascinated by the effect it’s having on movies, the opening up, the distribution. I’m working to adapt my book to a screenplay right now, but I could see writing a Web series someday.

SFBG I’m curious how your book took on the form of linked stories. One of the most famous examples of that form is John Steinbeck’s Pastures of Heaven, set in Monterey. Did you model When It Happens to You on any particular linked story collections?

MR You know, the form came about on its own — I wrote one story, and then I was so curious about what was happening with some of the other characters, another came out, then another. I was thinking about all the ways people betray each other, and that theme guided me forward. I didn’t want to do a lot of reading research while I was writing, I was afraid it would overly influence me. After it was all done, I found other linked story collections, like Elizabeth Strout’s Olive Kittredge, which I loved. But there were no intentional influences on the book.

SFBG Themes of motherhood pervade the book — from Greta’s chemical fertility rituals and presence of the super harvest moon in the first story, through the maternal ambivalence of Betty later on, and in between, Marina’s surprise at how much she loves her child Olivia, and her struggle to accept that child’s transgender identity.

MR Motherhood is obviously a huge part of my life right now, and in a way those characters define themselves by their reactions to it. Especially with Marina, I could never understand growing up how anyone could imagine a fulfilling life without wanting or having children — but of course people do. So that character lead me to live in that perspective for a while, so different from what I feel. And society really does judge women through the prism of motherhood.

SFBG You mentioned how much you admire Michel Houllebecq and love Georges Perec — both considered radical experimentalists. Would you ever write something outright experimental?

MR I would love to explore everything I can with my writing, and I do love challenging things. But I feel it still has to retain an emotional component that I can interact with — otherwise it’s like super-abstract jazz fusion [Ringwald is putting out a jazz album next spring], and my brain can’t handle it. I’m reading D.T. Max’s biography of David Foster Wallace right now, and I can totally see where his style was coming from, but that might not be my individual path. But this is my first fiction book, so who knows? *