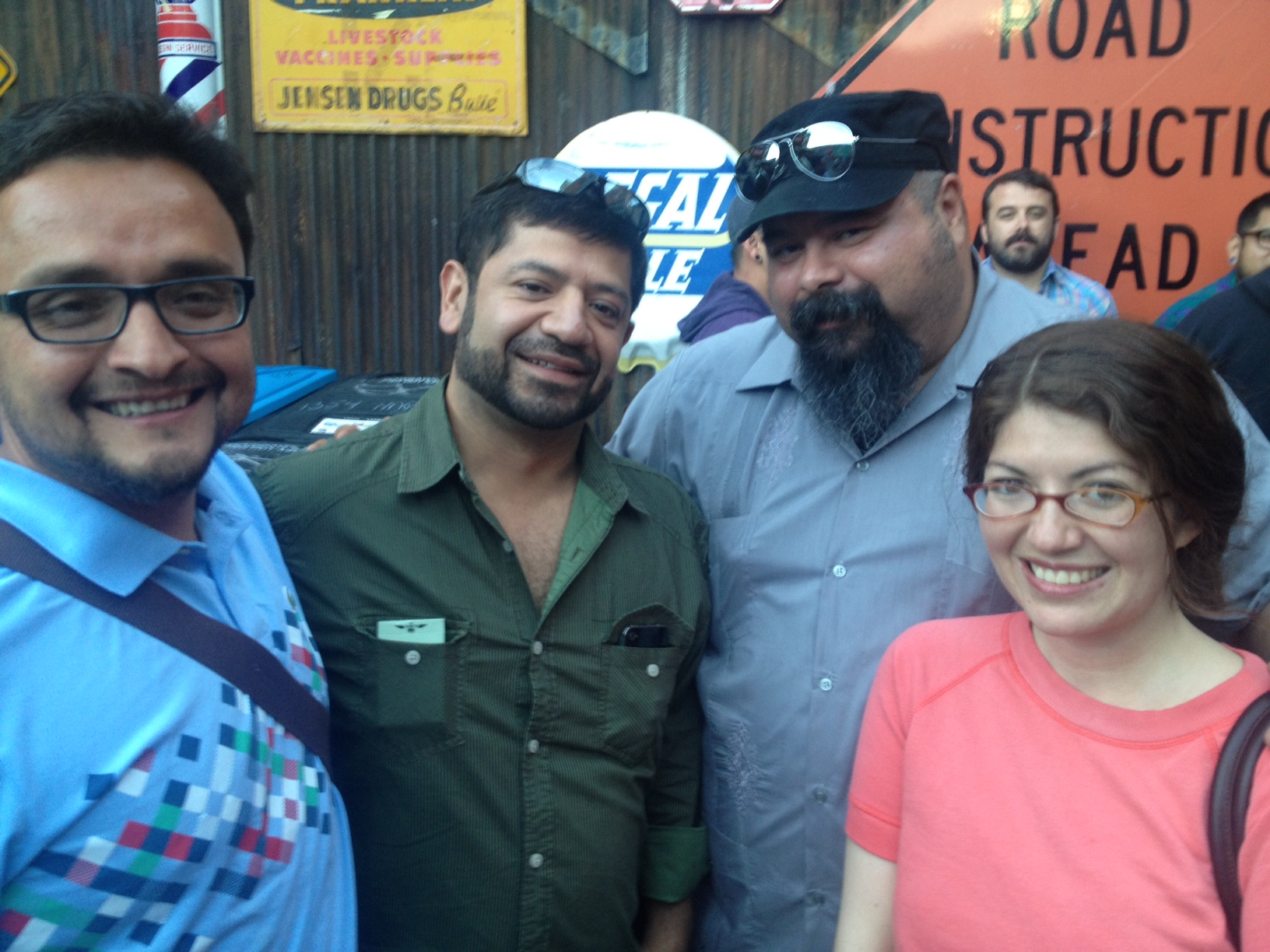 I hung out yesterday evening with the new occupants of the Eagle Tavern (now known as the SF Eagle, apparently) at a celebration of the lease-signing at the Lone Star Saloon. Alex Montiel and Mike Leon seem perfect to replace the former Eagle operators Joe and John: Tough-looking and leather-bearish, a tad gruff at first but friendly once they warm to you, and a wee bit shy of the press right now.

They’ll be releasing their full plans for the storied queer bar in a couple weeks, but I did manage to squeeze some juicy info out of Alex. They hope to open the bar in time for Halloween, the liquor license has indeed been secured (in fact, they have two!), and they’ll be doing their best to return some of the Eagle’s ambiance to the now-pretty-much-gutted space, with a few slight modifications to the bar layout for code and traffic flow reasons.

It’s certainly been a long, winding, super-convoluted road to get to this point!

I’m not sure anyone can convey all the twists and turns and backroom mechanations of the whole thing — Jay Barmann at Grubstreet has done some excellent reporting on it all, but there were still many, many balls in the air, shall we say, and the shady politics got slightly out of control. The fight to keep a historically queer space queer — despite the previous occupants’ quasi-abandonment, despite the lucrative offers from upscale restaurants, despite the limited power and will of the city to legislate such things — was a bit of a hot gay potato for the past year. (The Eagle’s infamous, charitable Sunday Beer Busts lived on in monthly form at El Rio in the Mission, at least.)

Even the idea of a “historic queer space” was questioned: if the Sisters of Perpetual Indulgence had sanctified it, and the ashes of multiple queer people were scattered about a place that raised tens of throusands of dollars for amazing local causes and was regarded as the heart of the old school gay leather rock ‘n roll biker community, was it important enough to fight for?

Glendon (identified slightly incorrectly in a recent Chron story as the Norm of the Eagle’s “Cheers” — that was actually the frizzy-haired dear in the thong and flip-flops who stood around clutching a goblet of piss) kept the Eagle issue at the forefront of the city’s debate about gentrification and the loss of queer nightlife spaces, angering some fussy queens with his usual passion and stridency, but in the end succeeding in rallying an assortment of powerful players to the Eagle’s defense.

I talked to Glendon today about how the whole thing went down. His basic summation was that Supervisors David Campos and Jane Kim did excellent jobs of making sure the Eagle stayed queer (Sup. Scott Weiner does not get very high marks from him in this regard), and that dubious dealings by the person supposedly representing the owner of the building — who lives north of the city, and who Glendon said had indeed wanted to welcome in new queer owners all along — were what kept screwing everything up. Finally the building owner (actually, the manager of a trust that includes several elderly owners) awarded the lease to Mike and Alex after he realized what was happening with his representation and the reaction of the community.

“I think it’s so great,” Glendon told me. “People keep saying that you can’t revitalize queer nightlife in SoMa — but that’s just a lazy excuse for gentrification. I’m glad we could band together to ensure a future for queer spaces in this city. We should be proud of what happened here. Our shared queer history is a powerful force.

“We’re still fighting for an officially recognized queer historical district in SoMa that will honor those who came before us, and also help preserve lively alternative queer spaces. Supervisor Christina Olague and CMAC [California Music and Culture Association] is working hard on that. One of the major problems is that it’s illegal to say something has to be or remain ‘gay.’ I think we saw here that it can be done within the limits of current boundaries.”

As for the future of the Eagle? “Mike and Alex have indicated that while they’ll still be preserving the main traditions and atmosphere — as well as probably hiring some of the old staff back — they are hoping it will be a much more open space. Already the Lexington Club is planning to host a fundraiser to help them remodel, so that suggests the Eagle will be more women-friendly, and there may be new parties there from some of the city’s younger promoters as well.”

My favorite part of this whole thing — besides the colorful faux-funeral outside Foreign Cinema restaurant, or the “assless chaps” takeover of the Skylark bar (both at one point identified as villains in the Eagle saga)? Beyond the banding together of the community to save an actually cool place that is a huge and drunken part of my life (also, DJ Don Baird on Sundays was secretly the best DJ in the city)?

At one point it was announced that the Eagle was to become a fancy pizza place with a wood-fired oven on the back patio. Glendon turned to me and hissed: “I always knew the straights wanted to put us in the oven!”