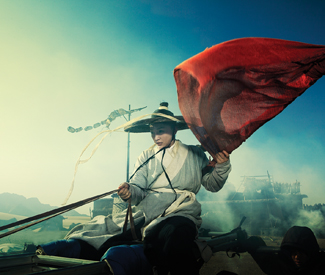 FILM The wuxia film is as integral to China’s cinema as the Western is to America’s — though the tradition of the “martial hero” in literature and other art forms dates back well before Clint Eastwood ever donned a serape. Still, the two genres have some notable similarities, a fact acknowledged by Tsui Hark’s Flying Swords of Dragon Gate, which adopts “the good, the bad, and the ugly” as a tagline in the splashy trailer for its American release.

“I hate to remake something when somebody already did a good job on it,” Tsui says from Hong Kong, where he’s filming his next project. “When I was a kid, Dragon Gate Inn was one of my favorite movies. When I started my career, I was lucky to collaborate with King Hu on [1990’s] The Swordsman. But during the preparation for The Swordsman, I spent so much time talking to him about Dragon Gate Inn, how he came up with the story and how he designed his shots.”

Pretty soon, I had the idea of writing a story [inspired by questions] that I saw as not having been answered by Dragon Gate Inn. He was laughing and said, if those are things that you feel like you can answer, that could be New Dragon Gate Inn. That film became a classic in the market in China. I wanted Flying Swords to be a continuation of the old story, with new characters: something you’re familiar with, but with a lot of new elements and people. I would say Flying Swords is a continuation. It’s not a remake or a part two.”

Dragon Gate Inn may be a familiar milieu, but Flying Swords marks the first time the dusty desert way station has been rendered in 3D IMAX. The climactic battle — between a ragtag gang of outlaws led by a mysterious wanderer, and power-mad government officials — goes down in an epic, churning sandstorm.

“It was something I wanted to try: 3D and IMAX at the same time,” Tsui says. “In my last film, [Detective Dee and the Mystery of the Phantom Flame], the investor wanted to make it into IMAX,” he remembers. But he didn’t want to blow up the film to IMAX size in post-production, so he held off until Flying Swords came along.

Likewise, he became interested in 3D while working on Phantom Flame. “I was looking around for the people who could tell me how to shoot a 3D movie. I [started] testing 3D with my cameraman and special effects people. When we saw Avatar, which was quite a cool experience, we invited their team to come give us advice [on Flying Swords].”

He learned so much while making Flying Swords, Tsui says, “I think it could be quite a good beginning for me to do something more fantastic, more crazy, next.”

Tsui, who also penned Flying Swords‘ screenplay, is by now an expert in the fantastic and crazy. He rocketed to infamy with 1983’s Zu Warriors from the Magic Mountain, a cult hit in America for its outrageously enjoyable combination of martial arts and special FX wizardry. Tsui, who honed his craft at UT Austin in the mid-1970s, has made nearly a film a year, and sometimes multiple films per year, for the past three decades. Some haven’t made it stateside, but the ones that have include the Jet Li-starring Once Upon a Time in China series; Jackie Chan’s Twin Dragons (1992); and Jean Claude Van Damme’s best (I guess) efforts, 1997’s Double Team (the one with Dennis Rodman) and 1998’s Knock Off (the one with Rob Schneider).

His 2000 Time and Tide (guns ‘n’ gangsters in modern-day Hong Kong) and 2007 Kurosawa-inspired Seven Swords were both excellent but under seen; Phantom Flame had a brief Bay Area run last year. Though it’s already a blockbuster in China, Flying Swords‘ local run is limited, touching down only in Emeryville and Santa Clara.

Just to put this in perspective, in 2000, Ang Lee picked up four Oscars for Crouching Tiger, Hidden Dragon, which layered an art-house patina over gravity-defying fight scenes — “wire fu” — the novelty of which astonished only viewers who’d never seen an episode of Kung Fu Theatre. (Crouching Tiger is still the highest-grossing foreign-language film ever released in America.) Wire fu is now a common component in mainstream action movies — maybe even a cliché at this point — but nobody uses it more effectively than Tsui, especially when paired with Jet Li.

“I missed him when he went to Hollywood, so I was waiting for the moment when he could come back to our country, our industry, and do movies like Flying Swords with me,” Tsui says, noting that Flying Swords marked a new kind of collaboration for the duo. “I think he became more mature, and also learned so much over the years making movies in different places. I’m expecting to work with him again, hopefully soon.”

The nimble Li (last seen wearily assuring Dolph Lundgren’s character that “you will find another minority” to make fun of, before excusing himself in act one of The Expendables 2) stars in Flying Swords as Zhao Huai’an, crusading fly in the ointment of powerful eunuchs who’ve injected mass corruption into Ming Dynasty-era China. Chief among them is Eunuch Yu (Chen Kun), a preening, eyeliner’d villain intent on capturing both Zhao and a pregnant maid (Mavis Fan) who’s escaped from palace clutches. The cast expands to include a taciturn woman in disguise (Zhou Xun, as butched up here as her Painted Skin: The Resurrection co-star Chen is camp-ified) and multiple ne’er-do-wells (sinister henchmen, heavy-drinking tribal warriors, a goofy rebel who bears a strange resemblance to Eunuch Yu), all of whom descend upon Dragon Gate Inn as the menacing “flying swirl dragon” looms on the horizon.

Alliances form (and are betrayed), schemes are launched (and botched), and the fight scenes — acrobatic and dynamic, with airborne tables, snapping chains, razor-sharp wires, and clashing swords — are mind- and eardrum-blowing. Through it all, Tsui’s trademark melding of classic story and fantastic special effects achieves innovative heights.

“I think audiences are always looking for new experiences in the theater,” Tsui says, who includes himself in that number. “The action genre was always something I watched as a kid. When I became a director, I was making movies for someone like me, [a viewer] who would really look for something challenging and to experience different things on the screen.”

THE FLYING SWORDS OF DRAGON GATE opens Fri/31 at the Bay Street 16 in Emeryville and the Mercado 20 in Santa Clara.