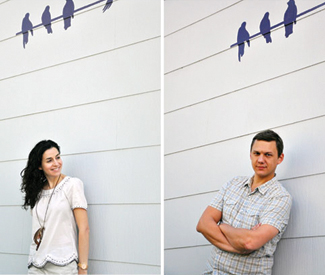 EAT BEAT I’d venture a guess that no one in this town knows the frosting tipped appeal of hand-mixing music and food more than the couple behind Turntable Kitchen. What started a year and a half ago as a simple (yet highly aesthetically pleasing) website mashing up recipes and records, has grown into a multi-headed creative output machine, with food and music news, giveaways, and physical pairings boxes — on top of the drool-inducing posts.

I caught up with the duo last winter and again this month to find out, among other queries, what ingredient you simply must always have on hand, and the records every collection should include:

San Francisco Bay Guardian For people who have never heard of Turntable Kitchen, can you give a brief rundown on how the concept came together?

Matthew Hickey Turntable Kitchen is a website combining food and music. We do that by pairing recipes Kasey creates in the kitchen with some of my favorite albums. I try to find albums that share the same characteristics as her recipes, pairing them together the way a sommelier would pair wine with food. The idea to start the site was Kasey’s, but we were pairing food and music in our own foggy Inner Sunset apartment long before we launched the site. I’ve always been obsessive about music and Kasey loves to cook. Part of our evening ritual involved her explaining the recipe we were going to make and me then hitting my record collection to find an album to compliment our meal.

SFBG How did you come up with the Pairings Box idea?

MH We liked the idea of sending goodies to our readers in the mail, but we weren’t sure what form that would take. Whatever we did, we wanted it to stay true to the theme of our site. Speaking to the music specific elements: they just made sense for me. I love vinyl records and have an ever-growing record collection. With the ease of digital distribution, though, some of my favorite new music isn’t yet available on vinyl. So the singles we release feature music that I wanted for my collection, but which didn’t already exist on vinyl. I’ve been making mixtapes for my friends for as long as I can remember, so the digital mixtape we include gives me yet another opportunity to share music I love with our supporters.

Kasey Fleisher I have always thought that a big barrier to cooking for many people is having a pantry. A lot of times, a recipe calls for a lot of expensive and/or hard to find ingredients and when you don’t cook often, it’s hard to think, “why not give this a try?” The concept of giving people three recipes and one to two premium dried ingredients gives them that nudge to experiment.

SFBG On the site, what have been the most popular pairing(s) so far?

MH Some of our most popular pairings have been our Pop Overs with Jam paired with Frank Ocean’s channel ORANGE, and Quinoa Sushi paired with Peaking Lights’ new album.

SFBG What’s the most important ingredient to keep in your cupboard?

KF That is a tough question! But I’d probably have to say salt.

SFBG What’s the most important album to keep in your record collection?

MH That is a tough one. If you are going to listen to it by yourself then you’d want your favorite album — whatever that may be. If you want versatile music that sounds great and can be played on any occasion, I highly recommend owning a few Motown records. I don’t think I’ve ever met anyone — young or old — who hates the Four Tops, the Jackson 5, The Supremes, Al Green.