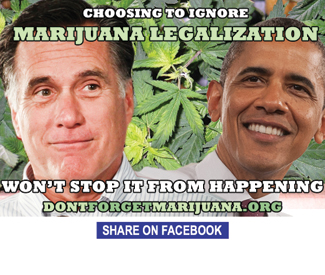 We’re not sure what troubles us most about this story: the suppression of marijuana imagery, a corporation impinging on our buzz, or the serious threat of private companies shaping public discourse.

Marijuana reform organizations Fire Dog Lake and Students for Sensible Drug Use were perplexed when their proposed ads featuring pot leafs were censored by Facebook. The mega-site’s decision not to show the ads was only reversed when the Electronic Frontier Foundation and the ACLU pointed out that, hey, it was kind of violating free speech rights, in an election year no less.

In its initial rejection of the advocacy groups’ ads, Facebook cited submission guidelines that said “ads and sponsored stories may not promote tobacco or tobacco related products.” During the failed Proposition 19 campaign in 2010, the site refused to host marijuana ads of any kind, stating the same policy.

EFF’s Rainey Reitman told the Guardian in a phone interview that this time around, Facebook was quick and efficient in responding to complaints regarding the censorship. The social networking giant did not respond to requests for comments on the matter.

Perhaps it’s water under the bridge now that the ads are up and running. But.

“The larger issue here is that different types of speech — especially political speech — are moving onto online forums, which means that corporate policies can dictate what types of speech will and will not be heard and permitted,” said Reitman. “Decisions that [Facebook] makes… will have pretty big societal ramifications.”

“Not everyone whose ads are blocked has EFF speaking up for them,” he said.

“Facebook is the equivalent of a public square at this point. Even as a private business, Facebook has an obligation to be viewpoint neutral.”

With Facebook’s hyper-targeted advertising system and ubiquity in our lives, Sonenstein said that the site may be the most important advertising resource we have today. He called the site’s power to disseminate information crucial in his group’s fight to raise awareness about marijuana access and legislative reform.

Given the pro-pot results of SSDU’s latest public policy polling on marijuana reform measures in Colorado, Washington, and Oregon, 2012 may be a big year for pot. And kudos to the groups involved in this story for taking on the Facebeast — hopefully, the incident has set a precedent that will give pause to other corporations that would knowingly or unknowingly affect our exposure to groups fighting for marijuana access.