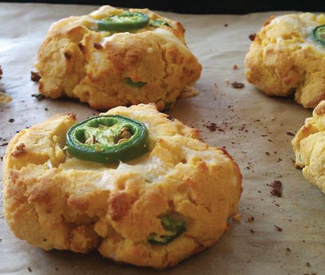 CHEAPER EATS “By the way, I have the best peanut sauce recipe ever. I would say it’s one of the top three things about me, my peanut sauce recipe.” Author-blogger-chef Gabi Moskowitz mentions over brunch at the Dolores Park Cafe in her Mission neighborhood.

“I develop crushes on peanut sauces and tinker until I get them just right. And — sidebar — peanut sauce, if you make a batch of it and keep it in your fridge, you’re like, 50 percent on your way to dinner.”

Moskowitz is full of helpful asides like this. She initially was discussing her Vietnamese spring rolls recipe, a popular dish she wrote about on her blog — BrokeAss Gourmet — and subsequently included in her first cookbook, The BrokeAss Gourmet Cookbook (Egg & Dart, 224pp, $16.95), released this spring. The book’s subtitle? “Recipes To Keep Your Taste Buds Happy and Your Wallet Thick.”

But the peanut sauce digression is probably the best representation of Moskowitz’s personality. The former kindergarten teacher is friendly and funny, obsessed with good food, and the consummate teacher, always looking for a way to make things better and cheaper. She just wants you to love her peanut sauce and much as she does.

And that’s why the formula for BrokeAss Gourmet dot com, and The Brokeass Gourmet Cookbook, works so well. It’s simple but creative dishes, made with inexpensive components (each ingredient is listed with a price), and explained in a relatable way. Moskowitz always dishes on how she came to these recipes, be it after a rude ex-boyfriend criticized another meal, or a when a close friend fell ill and needed something warm and appetizing in her belly.

The book includes pantry staples and recipes for meals such as lamb-feta burgers, sundried tomato ricotta gnocchi, and garlic-lemon-rosemary chicken (“Third Date Chicken”), which she deems the sluttier version of the legendary “Engagement Chicken.”

The blog, which began in 2009, saw near-instant success, after MSN Money covered it just two weeks after the launch. The morning of the article, Moskowitz says she awoke to see 30,000 hits over 24 hours. Just before the launch, she became aware of the other brokeass, Broke-Ass Stuart — who wrote a popular lifestyle book and runs his own site — and contacted him to let him know. He was fine with the name, as he didn’t plan to cook or include recipes on his own site, and Moskowitz says it was the start of a great friendship. The two support each other on their respective sites.

On the BrokeAss Gourmet site, the chedder-thyme knishes and brown butter pumpkin mac and cheese are the long-running top posts. When Moskowitz was featured in an iPad food app called Appetites, the New York Times wrote it up and included a mention of that creamy fall mac and cheese recipe.

When it came to choosing which posts to include in the cookbook, Moskowitz said she wanted it to be a “really excellent first cookbook for someone” and to show that it’s possible to eat well on a budget.

“I grew up in Sonoma County; I live in the Mission in San Francisco, where food is king. It’s not enough for me to just eat, I think it’s really important to eat well, and to eat fresh food. Even when I was making no money at all, I wasn’t willing to compromise my lifestyle in that way, I wanted to make it work.”

Now that the initial buzz of the cookbook has slowed down a bit, Moskowitz is still wildly busy, keeping up with the blog posts, working on some top-secret TV projects, and finishing the manuscript for her second book: The Brokeass Gourmet Pizza Dough Cookbook. That one is about the different meals you can make with pizza dough, besides the obvious (naan, cinnamon rolls, calzones, donuts, Italian stromboli appetizers).

As with much of her food writing, the concept came from a personal experience. She was invited to a potluck dinner party a few years back and the host asked her to bring a main course. “I had this huge batch of pizza dough and 15 minutes before I was supposed to leave, the host called to say the party was canceled. I was like, ‘ah man, I have all this stuff!’ and I’d basically spent my grocery budget on it, but I found that I could do a million and a half things with pizza dough.”

While she did make a great many dishes with that leftover dough, her weekly go-to meal staple is a bit different. She has a $15.94 Duc Loi Supermarket trip nailed (of course, did a post about it). And her personal comfort dish is built with it: soba or rice noodles with that crush-worthy peanut sauce, shredded vegetables, and shallow-fried cube sprouted tofu. Sometimes garnished with crushed peanuts or sprouts and chili paste.

“I’ll make a big batch of it and seal it in the fridge if I’m having a busy week, and then that’s just what I’ll eat at the end of the day.” Even as the conversation comes to an end, and the Dolores Park Cafe dishes are pushed aside, Moskowitz is still giving tips on low-cost eats.