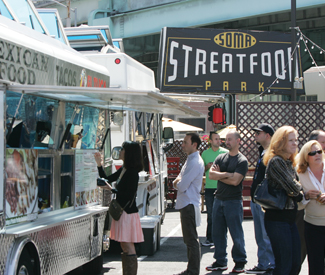 With its decidedly hip aesthetic and clientele, San Francisco’s food truck trend may be naturally assumed to be environmentally sound and health conscious. But the rapidly expanding craze may actually be creating air pollution and endangering the health of their employees in ways that aren’t yet being regulated.

Although the mobile eateries are held to a few of the same standards as their brick and mortar counterparts, such as food hygiene and sanitation, the gas-powered portable generators that provide needed energy to the trucks are a tricky beast to tame. The exhaust-heavy portable generators do not fall under the San Francisco Department of Public Health’s radar of regulation, according to its Food Safety Program Director Richard Lee.

“There are combustion products from the generators being generated while the truck is parked and operating,” he told the Guardian. “The generators are needed to power lights, fans, refrigerators, etcetera. SFDPH does not monitor or regulate the generators.”

The lack of monitoring on the generators may not be due to a lack of need for regulation, but rather the difficulty in doing so. Given that most of the generators are used to power relatively small vehicles, their small size inhibits them from meriting the attention of the California Air Resources Board (CARB) after their initial manufacture.

A CARB-compliant generator has met with the organization’s restrictions on various organic gases, nitrogen oxides, sulfuric oxides, carbon monoxide, carbon dioxide, and particulate matter. However, the generators are only monitored at the point of manufacture, with their in-use emissions going unregulated.

Furthermore, Bay Area Air Quality Management District spokesperson Aaron Richardson tells us that despite the BAAQMD’s 28 air monitor stations, the localization of the fad and the trucks themselves would make it difficult to see the effects of the generators as a regional issue.

“The concern would be they may not all operate in the same ways,” he said. “I think that if the trucks…are running back up generators, it’s going to emit some pollution. It’s something I think we will be doing more research on, but at this point it’s not looking like it’s a dramatic impact on air quality. CARB regulates all mobile sources, and lot of these trucks use individual generators. At this point, we only regulate back up diesel generators…of 50 horse power or above.”

So BAAQMD doesn’t regulate the generators because they’re gas-powered, and they don’t trigger CARB’s post-production attention, despite that agency’s current efforts to reduce the state’s carbon footprint.

CARB spokesperson John Swanton explained that given the small size and localization of the generators, it’s up to the individual communities to decide how to approach the situation.

“It’s up to the community to decide if they can bear the expense of a highly regulated community. In the terms of restaurants — which is what food trucks are — what are the community’s standards and regulations?” he said. “When we sell, say, a Honda generator, we have ideas of how that’s going to be used…We try to make it as clean as practically possible, but the idea is that it’s not gonna run 24/7 at the same location. If it’s going into a food truck and the food truck is going into a particular district, then it becomes the decision of the city and the air quality management [district].”

It seems, then, that no one is really regulating the exhaust emissions coming from the hordes of trucks that travel up Haight, down Market, into Fort Mason, and sit in clusters downtown, in SoMa, around City Hall, and other spots around town.

But at least they aren’t dirty diesel fuel, right? Perhaps the BAAQMD and the city of San Francisco have no need to regulate the teensy-eensy bit of gasoline generator exhaust.

Yet according to SFDPH spokesperson Imelda Rayes, there are now approximately 300 (registered) mobile food facilities in San Francisco. That means the number has nearly tripled since the mere 120 registered MFFs that were scouring the streets in 2009. What they lack in horse power, the generators may make up for in sheer multitude.

“In a period of three years, the number has increased almost 250 percent and [we’re] still getting more applications,” she said.

In addition to cumulative impacts, there are also questions about the health impacts on food truck employees.

Studies like such as the 2009 “Modeling the Effects of Outdoor Gasoline Powered Generator Use on Indoor Carbon Monoxide Exposures” by academics Liangzhu Wang and Steven Emmerich brings up a different concern: gasoline generators create emissions of poisonous carbon monoxide.

“The generators are always positioned outside of the vehicle. The workers are inside,” Lee said. “We would not expect that there is significant employee exposure to the generator exhaust to the employees.”

Yet the U.S. Centers for Disease Control and Prevention (CDC) reported that half of non-fatal carbon monoxide poisoning incidents in the 2004 and 2005 hurricane seasons were due to the gas-powered generators used to heat homes, even when placed outside the homes themselves.

Food truck generators, given their smaller size, are often placed much closer to the trucks and their workers than in the case of houses and their inhabitants. Furthermore, the trucks often idle for long periods to keep the food warm and utilities working.

“At this point, it’s enough of a new thing…We’re interested in finding out more about them, but at this point we are not receiving many complaints,” Richardson said. “A lot of variables are involved. It’s something I think we will be doing more research on.”

After the game of verbal hot potato that was research for this article — it seems every agency deferred to another in terms of exactly who is monitoring these things — Swanton assured us that the danger doesn’t seem imminent.

“In general, small engines [portable generators] are dirtier than an engine providing motor power to a vehicle,” he said. “But the sheer number of these cleaner engines dwarfs everything.”

True, but the food trucks that run for more than a few hours at one location are increasing in numbers at a rapid pace. With the high number of mobile food trucks in operation, most of which utilize some form of generator or another, it may be time to nail down those pesky variables involved and draw some conclusive evidence on the potential environmental and health effects of our city’s seemingly innocent snack time.