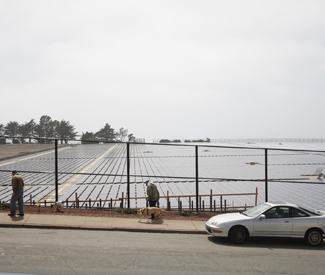 Retirement is knocking at Ed Harrington’s door. But the San Francisco Public Utilities Commission general manager is hesitating, not quite able to muster the will needed to walk out the door. He has something that he wants to finish first.

The sage city veteran has labored for years to launch an historic program so transformative that it would finally allow city residents and businesses to reject a homicidal utility monopoly and the dirty electricity that it sells. Success could be mere weeks away; failure would be a bitter blow.

Twice in the past 27 months, Harrington and his staff have fumbled efforts to launch the city’s long-promised community choice aggregation (CCA) program. The program, CleanPowerSF, would give Pacific Gas & Electric (PG&E) customers the option of switching over to a publicly backed electricity provider selling green, climate-friendly power.

Harrington’s previous CleanPowerSF launch schemes collapsed in mid-2010 and again early last year without getting off of the ground, largely because nobody — neither the city nor private industry — would shoulder the large financial risks. Unlike those failed efforts, which would have offered a private company virtual carte blanche to sell power to as many PG&E customers as possible, the latest CCA proposal resembles a successful program operating in Marin County. The Marin program started small in early 2010 and is already growing at a rapid clip as it pursues true energy independence.

For the next few weeks, despite having previously planned to retire in August, Harrington will oversee a last-ditch effort to drive approval of his latest iteration of CleanPowerSF by the Board of Supervisors. “I’ve offered to stay into September so that we can have the CCA discussions at the board,” Harrington told the Bay Guardian.

Harrington declined to discuss the latest version of CleanPowerSF, the real and perceived financial risks of which will be hashed out by the Budget and Finance Committee, referring questions to a spokesperson.

But environmentalists and local “green jobs” advocates who just 12 months ago were panning CleanPowerSF, ready to block its passage through the board, are now lauding it. They say the change came about after Harrington met directly with them and seemingly changed his own mind about how the program should be run.

The program would initially see Shell Corp. sell 20 to 30 megawatts of renewable electricity generated in far-flung places to fewer than 100,000 residential customers. Instead of fostering new supplies of renewable energy, San Francisco residents may initially buy power at premium prices from existing wind, solar, and other green facilities. That might make San Franciscans feel warm and fuzzy, but it wouldn’t necessarily reduce the nation’s overall carbon footprint.

The activists agree that it’s a crying shame to get into bed with an evil multinational oil company. But they say it’s an acceptable start, as long as the program evolves into something far more meaningful — into something resembling the Marin Clean Energy model. Like in Marin, the activists want San Francisco to use CleanPowerSF revenues to help build its own solar, wind, and other renewable energy and energy efficiency projects, many of them right here in city limits. They want the city to sell those power and the energy efficiency gains directly to CleanPowerSF customers.

Over the coming years, the SFPUC could gradually add enough clean electricity at competitive rates into the CleanPowerSF mix, generated by its own facilities and purchased off the open energy market, to meet the needs of all the city’s residents and businesses.

The build-out of solar power plants and other renewable energy facilities has always been imagined as an integral element of CleanPowerSF. But until last October, critics say SFPUC officials were treating the build-out as an afterthought, making little effort to lock in plans to move forward with the construction as a structured part of a CCA program.

“The SFPUC staff decided they wanted to do this the easy way and just buy energy,” said Eric Brooks, a regular at City Hall hearings who chairs the San Francisco Green Party’s sustainability committee and has spent years working with the SFPUC on CleanPowerSF. “They wanted to do that because it was easy — you can just declare victory.”

Once the general manager started to meet directly with local activists, Brooks says, “Harrington started hearing what we had been saying to the staff for all these years about how important the build-out is.” Harrington began to understand the importance of a renewable energy build-out that begins as soon as the new program launches. In turn, the activists threw their support behind Harrington and the program.

Brooks said that the build-out of city-owned renewable energy facilities could create thousands of jobs. It could also lead to energy independence in a city where environmentalism is a badge of honor, but where PG&E continues to sell nuclear and polluting fossil fuel energy without facing any competition.

“This is the perfect solution to the climate crisis and the economic crisis,” Brooks said. “We need to create a green New Deal. That’s the depth of crisis that we’re in, economically and environmentally.”

Such a build-out is also expected to build support for the program at the Board of Supervisors. Without it, the City Controller’s Office calculated that the city’s economy could take a hit to the tune of $8 million over five years after CleanPowerSF launches in the spring in additional electricity expenses, potentially jeopardizing about 100 jobs. But that analysis failed to consider the thousands of jobs that could be created laying panels, installing turbines, and performing other tasks if the city develops its own renewable energy supplies as a part of the program.

It’s impossible right now to say precisely what type of renewable energy facilities would be built by San Francisco: A $2 million study that would paint that picture is planned. But Paul Fenn, president of Local Power Inc., which is helping the SFPUC prepare to call for bids from companies interested in building the facilities, said they could include everything from solar panel arrays to customers’ energy efficiency gains to a wave energy plant.

The first CleanPowerSF committee hearing is scheduled Sept. 12, followed at some point thereafter by an historic board vote that will almost certainly prove contentious, likely pitting the board’s progressive members who have long supported public power against some of its fiscal conservatives.

Much of the debate will focus on an initial $19.5 million investment by the city. Of that money, about one-third would be used as collateral — a pool of cash held in escrow and available to reimburse Shell if the program flops. SFPUC spokesperson Charles Sheehan said the $7 million in collateral would gradually be recouped by San Francisco if the program moves forward successfully.

Another $2 million would fund CleanPowerSF customers’ energy efficiency programs; $2 million would help customers install solar panels; and $2 million would be spent on the study to determine how best to build out the portfolio of renewable energy plants owned by San Francisco. The rest of the money would cover operating and startup expenses, and it could be recouped later through power sales.

In a town where PG&E wields tremendous political and financial influence, proposing to gamble public funds establishing a competitor to the company is always sure to be thoroughly scrutinized, if not outright opposed and criticized. Supporters of the program, however, say that the gamble is a safe and necessary one that could have sweeping workforce and economic benefits.

“I don’t think that we can afford not to do CCA,” said Sup. David Campos, the program’s most active supporter on the Board of Supervisors. “So long as something like CCA is not in place, PG&E will continue to be the only game in town. I think it’s important for us to give consumers in San Francisco an alternative to PG&E.”

CleanPowerSF has long suffered an identity crisis that has harmed its prospects of legislative approval. Opponents deride it as a public power scheme and they work on behalf of PG&E to quash it. But ardent public power supporters do not see it that way: They consider CleanPowerSF to be little more than a minor stepping stone toward public power, and they have not rallied around it nearly as much as they have rallied around some of the storied yet unsuccessful public power campaigns of years past.

If Harrington can clinch lawmaker approval for CleanPowerSF before he retires, he will have provided city residents with a lasting choice in what kind of electricity they buy.

“I think that any effort to compete with PG&E is seen as public power,” Campos said. “But this is really about providing a choice.”