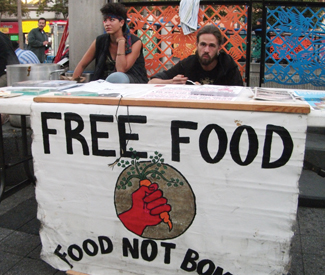 Keith McHenry was in Tampa, feeding fed-up (and hungry) Republican National Convention protesters, when we spoke by phone. Next he’ll head to Charlotte to do the same for those protesting the Democrats, and then to New York for Occupy Wall Street’s anniversary on Sept. 17.

Everywhere he goes, he’ll feed the masses home-cooked vegetarian meals. But unlike the other protesters, McHenry helped invent the system that gets them fed. He helped to found Food Not Bombs, the organization that salvages food that would otherwise be thrown out, cooks it up, and serves free, tasty meals in public squares throughout the world.

McHenry served the first meal in Boston Common in 1980, then moved to San Francisco a few years later, bringing the movement with him. Now, there are 500 chapters in the United States and hundreds more throughout the world.

“We provided food for 100 days at the Orange Revolution in the Ukraine,” McHenry recalls. “We fed a two-year occupation in Sarajevo. We provided food at Camp Casey,” Cindy Sheehan’s anti-war stakeout at then-President George W. Bush’s ranch.

The FNB approach to hunger is pretty simple: There’s enough food to go around, it’s just not distributed right. So activists find ways to distribute food that would otherwise be thrown out. San Francisco FNB gets donations of extra, unsold food from places like Rainbow Grocery and Other Avenues food co-op.

It was started by anti-nuclear activists, thus the “Not Bombs” part. But there’s more to their analysis than a cry for peace. As the group states, “For over 30 years the movement has worked to end hunger and has supported actions to stop the globalization of the economy, restrictions to the movements of people, end exploitation and the destruction of the earth and its beings.”

A typical Food Not Bombs operation features a table with a vegetarian or vegan meal, maybe some produce, and anti-war and other leftist literature and banners. In 1988, this is what was on the table when the San Francisco Police Department cracked down on Food Not Bombs, arresting dozens for serving food at the entrance to Golden Gate Park at Haight and Stanyan.

“We had our sign such that when you walked in at the corner of Haight you would see the words Food Not Bombs for a block and a half,” McHenry recalls. “What was good about that was you had tourists, and local business people, and local workers, and you had the people in the Golden Gate Park, all coming together to eat at that place. It was really perfect.”

FNB still serves there on Saturdays, but that perfection was disrupted by a high profile series of arrests in 1988, then again a few weeks ago, when Parkwide, the Recreation and Parks Department’s new bike rental program, set up in their old spot.

Food Not Bombs still runs into conflicts with police and courts. Last year, McHenry was one of 24 arrested in Orlando, Florida, spending 19 days in jail after protesting an ordinance making it a crime to feed the homeless in the city’s downtown.

Last week, FNB held its world gathering at Occupy Tampa’s tent city, serving daily breakfast and dinner while planning the future of the movement. Occupy Tampa has only grown in recent weeks as it hosts people in town to protest the RNC. Sharing food and shelter, making art, and protesting politicians doing the bidding of greedy corporations is McHenry’s vision made reality — and one he got to see bloom last fall with the birth of Occupy.

As McHenry tells it, he and others from Food Not Bombs have been part of a decade-long buildup to the “occupy” tactics that erupted into the world in 2011. “I was promoting the idea of occupation ever since a meeting that was held in 2003 after Cancun,” he said. Protests at the World Trade Organization meeting in Cancun were part of a growing trend of disrupting international conventions in which political and business leaders make agreements that further exploitation and neo-liberalism. But McHenry says that more was needed.

“There was a group of us that got together and said these one-off events, like summits, were just becoming more disempowering rather than successful,” he said.

After years of calling for occupations, the notion clicked last fall. “We had seen the Arab Spring, so that made it that much easier to imagine the occupation concept. And the Spanish occupations were just then happening.”

“That’s a common thing,” McHenry said. “People try all these different ways of organizing and then all at the same time, the same thing will start to click. And there’s no real way to say, ‘oh, it started here, it started there, this person started it.'”

When Occupy encampments sprang up, Food Not Bombs was behind many of the kitchens and food sharing efforts — it even had a guide to building a tent city kitchen at foodnotbombs.net/occupy_supplies.

“In the beginning of some of the first occupations like Chicago, DC, Wall Street, we made peanut butter and jelly sandwiches, because we didn’t know if we would get busted,” McHenry said. “We ended up behind the scenes helping provide free meals to the occupations.”

McHenry said he hopes the spirit of occupying grows again. “It’s so important,” he said. “It would be great if we could regroup and retake public space.”