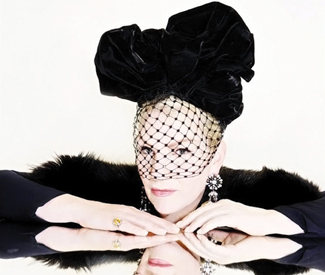 SUPER EGO Veronica Klaus, jazz chanteuse extraordinaire, is one of the most sincerely charming people I know — especially when she breezes up to Momi Toby’s cafe in Hayes Valley on her bike one recent morning, fresh from a brisk ride to Ocean Beach, flawless in a casual black wraparound top, ivory kid gloves, and a vintage black bag full of her chihuahua, Charisse. (Yes, queens, named after Cyd — and no, not sporting matching gloves.) “Sorry I’m a little late,” she smiled, barely out of breath, gesturing toward her sculptural figure. “Just trying to keep it all in place.”

She’s a dry wit, too: “After a certain paper’s review of my new CD began with the phrase ‘Veronica Klaus, transgender jazz singer’ I almost wrote a letter addressed to the ‘homosexual editor!'” she told me over black coffee. The CD in question is the jaunty, glistening Something Cool, recorded with the impeccable Tammy Hall Trio. And the lady in question is never anything but a lady, refraining from sending that catty letter after all.

Just please don’t put her in a box — she’ll always pop right out of it, with that distinctly emotive voice of hers and an ear for classy classics. Those who’ve followed the steadfast arc of Veronica’s career on the SF jazz scene since the 1990s recognize her unique ability to combine the musically timeless with the in-the-moment unorthodox. Case in point: her upcoming evening-length tribute to equally unpeggable Peggy Lee, also with the Tammy Hall Trio, taking over the Rrazz Room Fri/24 and Sat/25 and later traveling to NYC and LA. (Her CD of Peggy Lee songbook selections will be released next year).

The gloriously poised Lee, who passed away a decade ago at 81, enjoyed a career that spanned six decades and multiple musical styles, but is still mostly known for her slow-burning burlesque-friendly takes on “Fever” and “Why Don’t You Do Right?” and her voice work on Disney’s Lady and the Tramp. Homosexuals also have a very special relationship with her cinematic rendition of Lieber and Stoller’s “Is That All There Is?,” mostly foisted upon them via epic and/or overambitious drag interpretations.

Despite a couple obvious affinities, why Peggy Lee? “I think part of it is to make amends, really,” Veronica told me. “Like many, I knew her mostly through the hits and the novelty songs, like ‘Professor Hauptmann’s Performing Dogs’ — I still don’t know what that one’s all about. But she had this huge career full of so many different styles and encompassing so many historical moments, from the Benny Goodman era of the early 1940s — Benny heard her obsessively singing along to Lil Green 78s on the gramophone she would lug around with her, and that launched her solo career — to the ’70s when she was doing a more soft rock sound, but she was doing actually good stuff. Along the way, she was always listening to what the kids were doing — Ray Davies, Paul McCartney wrote songs for her, and her Mirrors album [from 1975] is considered a classic by many.

“So the show is really more an almost archaeological undertaking, rediscovering all the musical ways Peggy transmitted her … persona, her flame. Although she had a unique voice, of course, it was really this persona that she projected that held everything she did together. What I’m doing isn’t an impersonation, I’m evoking her spirit. She had such a way about her. She was an enigma. And that’s why I think people were fascinated with her, and also why she’s this wonderful challenge to connect with on a performance level. She didn’t dance around, she didn’t hit people over the head right away. She drew people in with her focus.

“In fact, her motto was ‘softly, with feeling.’ One time she was performing at a nightclub in Palm Springs, and everyone was talking over her. But instead of getting brassy and trying to grab attention that way, she deliberately started singing even softer. Soon people’s curiosity overcame them and they began to quiet down. It was a sort of spell she cast, an enchantment, and something she modeled her performances after for the rest of her life.

“I think that’s just a wonderful thing — to acknowledge the seductive power of quiet focus, this certain softness, feeling.”

The always cheeky, musically fantastic Honey Soundsystem (www.honeysoundsystem.com) just completed its audacious experiment: no Facebook presence for one month. And hey, the weekly Sunday night party at Holy Cow was packed. Could this spell the end of clogged feeds and overloaded notifications? Who has the guts to go FB free ’til 2k13?