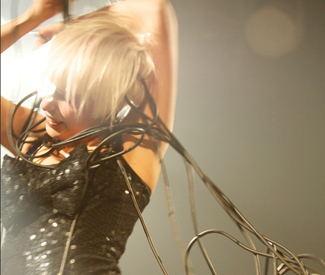 FALL ARTS Gemma Paintin and James Stenhouse were obsessed with Americana long before the two Bristol-based performance makers (known collectively as Action Hero) ever set their cowboy boots in the United States. In fact, they’d performed their site-specific first piece, a barroom exploration of the Western (called simply A Western) for years before lobbing it into the belly of the beast, where it appeared as part of Austin, Texas’ Fusebox Festival in 2010.

“We were shitting it,” remembers Paintin, in a British phrase meaning mighty fretful. But the crowd loved it; Paintin calls it their best audience ever. She and Stenhouse have worked together since 2005 on pieces that engage the audience as co-conspirators as well as subjects in their own right. A good example is their piece, Watch Me Fall, which had the audience cheering on a series of ridiculous, slightly risky stunts from either side of a long runway, a work that Paintin explains was inspired by the duo’s interest in motorcycle daredevil Evel Knievel.

A diminutive woman with bright blond bangs, Paintin spoke last week at a sidewalk table outside BrainWash Café, fresh from a rehearsal at CounterPULSE, where she and James were in the fifth day of leading a collaborative performance workshop with a selected group of Bay Area–based American artists (Laura Arrington, Andrea Hart, Xandra Ibarra, Richie Israel, Elizabeth McSurdy, Mica Sigourney, and Ernesto Sopprani).

Stenhouse was not able to join the conversation — rehearsal had run long and he was following its willy-nilly course to a local karaoke bar, where he and the rest of the group were planning to take turns singing Tammy Wynette’s “Stand by Your Man.” A couple of days earlier, the group had gone tailgating at a pre-season NFL game in Oakland. Such are the trails, happy or otherwise, down which the adventurer in Americana must travel. (You can follow some of the research results thus far — in a process McSurdy calls “aesthetically polyamorous” — in the group’s blog posts at www.counterpulse.org.)

The workshop sets out to investigate American cultural mythologies using the concept of the stranger or outsider as starting point. Hosted by CounterPULSE with leadership from program director Julie Phelps, the program is part of a major cultural exchange project by CounterPULSE’s collaborator on Stranger in a Strange land, the arts-based University of Chichester in the South of England.

“All the work of the Department of Performing Arts is about making radical new work, and we have a reputation for working with exciting and challenging artists, hence our connection to Action Hero,” explained Ben Francombe, head of the department, by email. “The University of Chichester has instigated this overall project as a way to explore different interdisciplinary working methods,” he continues, “which involve the idea of exchange.” Francombe adds that the University is keen to continue having a presence in the Bay Area.

“It’s been really fun actually,” enthuses Paintin, clearly pleased with how experienced and open-minded her American counterparts have proven with collaboration. “We’re trying to just be about the process.”

STRANGER IN A STRANGE LAND

Chinglish The new comedy about East-West miscommunication from David Henry Hwang (M. Butterfly) has already been to Hong Kong but rebounds to the West Coast courtesy of Berkeley Rep. Aug. 24–Oct. 7; www.berkeleyrep.org

Geezer and The Real Americans The Hoyle boys — veteran clown and physical actor Geoff Hoyle and bounding son Dan, a theater sensation in his own right — return to the Marsh for re-runs of their respective, wildly popular solo shows. The Real Americans: Sept. 7–29; Geezer: Oct. 6–Nov. 18; www.themarsh.org

The Normal Heart Larry Kramer’s 1985 play returns (in the new Broadway revival directed by George C. Wolfe) at a time when the history of the AIDS crisis has become endangered by a vague “normalizing” narrative of American progress, or what Sara Schulman aptly calls “the gentrification of the mind.” Here’s an opportunity to remember lots of things, not least those who died and fought, a great play, a vital movement, a continuing health emergency, and the importance of mass resistance. Sept. 13–Oct. 7, www.act-sf.org

Roughin’ It 2: Theater. Oysters. Campfire. Booze. Again. Fresh from sold-out success with Duck Lake, PianoFight heads back up to Point Reyes for a second season of woozy waddling, shucking and jiving along the shore of Tamales Bay, featuring everything in the subtitle including brand new short plays harvested from a bed of delicious local playwrights. Sept. 15 and 22; www.pianofight.com

Rhinoceros Paris-based Theatre de la Ville’s production of the Ionesco play — a modernist classic on individual resistance to tyrannical conformity — is a remounting of the company’s acclaimed 2004 production, making its first US tour. Sept. 27–28, www.calperformances.org

Acid Test: The Many Incarnations of Ram Dass “Be Here Now” all over again in Lynne Kaufman’s new play — not so much a theatrical return as a serious flashback — starring the exceptional Warren David Keith as the titular giant of 1960s counterculture, a Harvard prof turned LSD advocate and spiritual teacher. Oct. 4–Nov. 24, www.themarsh.org

Einstein on the Beach Composer Philip Glass and director Robert Wilson reinvented the opera in 1976 as an enthrallingly weird-ass piece of avant-garde spectacle and the world has not been the same since. This remounting —overseen by the original team of Glass, Wilson, and choreographer Lucinda Childs — marks the first performances of the five-hour formalist extravaganza in 20 years. The international tour takes its highly anticipated Bay Area bow courtesy of co-commissioner Cal Performances. Oct. 26–28, www.calperformances.org