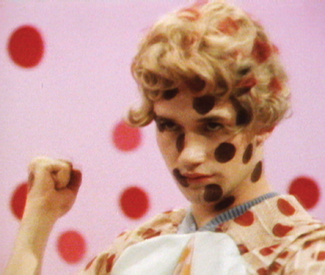 VISUAL ART As the Cindy Sherman retrospective draws huge crowds to the San Francisco Museum of Modern Art’s fourth floor, visitors will find it the gateway drug par excellence for a neighboring show just a few steps away. Taking in Sherman’s frozen drag — in which visual art harnesses performance as both subject and tactic — is already to broach the invigorating dialogue underway in “Stage Presence: Theatricality in Art and Media.”

The eclectic group show, curated by SFMOMA’s Rudolf Frieling, gathers choice pieces from the museum’s collection, plus some vital loans, to consider the increasing role of theatricality as theme and strategy in contemporary art since the 1980s.

It further includes a “live art” component courtesy of the museum’s curator of public programs, Frank Smigiel — a weekly performance series that continues through Labor Day weekend in a commissioned space adjacent to the gallery, a lush little jewel box of a theater-cinema designed by Bay Area artist Tucker Nichols. This week’s performance piece is a highly anticipated appearance by Los Angeles-based troupe My Barbarian: Broke People’s Baroque Peoples’ Theater, a raucous, multi-layered work that figures the American financial system as a garishly absurd spectacle of waste. (In addition to this site-specific series, a performance finale takes place October 4 in the museum’s atrium: Rashaad Newsome’s Shade Compositions, a choreographed choral work for 20 women of color.)

Whether live or otherwise, the bridging of the visual and performing arts in “Stage Presence” encompasses a truly wide range of work. Highlights include some fascinating projected pieces on view in one or another of the floor’s darkened recesses — each one furnished with a glass window allowing visual access from the gallery proper, whether or not one wants to venture into the screening room.

One of these is Charles Atlas’s Hail the New Puritan (1986), which collapses the visual and performing arts by way of a made-for-BBC faux-documentary portrait of Scottish dancer-choreographer Michael Clark, supposedly captured over the course of one monumental but half-desultory day as he and his company rehearse his New Puritan (1984). With endless interruptions and segues — and a soundtrack sharpened by ample doses of post punk’s jolly downers, the Fall (whose Mark E. Smith and Brix Smith even appear in a staged TV “interview” with Clark) — Hail the New Puritan remains a gorgeous work whose ’80s-era aesthetic (a little like Godard meets Culture Club) retains a questioning and mocking insouciance.

It’s such jubilant indifference, including toward previous standards of seriousness or taste, that has contributed to a significant turn in much new work in the 1980s. Frieling, in an email correspondence from Europe, describes it as “a moment where the historic era of performance art and conceptualism had been challenged by a more exuberant, playful, and hybrid way of working — Charles Atlas, Peter Fischli and David Weiss, or Robert Wilson [all represented in the show] being three examples from that time despite their huge differences.”

Other salient themes running through the show explore the conceptual and practical possibilities in rehearsal, reenactment, and the speech act. To this end, the installation Today Is Not a Dress Rehearsal — which repurposes video of a Judith Butler lecture and other materials from an eponymous three-day collaborative performance by Mika Tajima (with her group New Humans) and Charles Atlas in the museum’s atrium in 2009 — offers subtle food for thought amid a visual and aural repositioning of a privileged form of address.

Also intriguing along similar lines is Sharon Hayes’s restrained yet progressively enthralling four channel video work, Symbionese Liberation Army (SLA) Screeds #13, 16, 20, & 29 (2003). In each of four television screens fixed with audio headphones, viewers see and hear the artist reciting from memory each of Patty Hearst’s four video messages to her parents while a hostage of the SLA in 1974, with prompting from an unseen audience each time she veers even slightly from the script. It becomes, especially in the era of Occupy, a resonant occasion for a collective act of remembering as well as re-presenting, re-creating, resituating, and reformulating an iconic but elusive link to a radical past.

“Rethinking formats of presentation is a key to many of the works and the whole show,” says Frieling. “We were ultimately interested in art works that stress this open process while reflecting about the conscious act of staging.” *