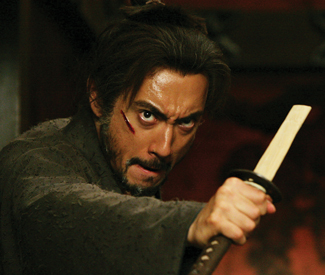 FILM Suspended between the deluge of superhero flicks and awards-show fodder (speaking of, check back next week for the Guardian’s fall movie preview), mid-to-late August is an outstanding time to go to your local art house, rep theater, underground cinema, or movie night in the park.

You could also seek out a pair of new movies from Asia, both opening Friday, which offer viewing experiences only similar in that they’re entirely different than anything else out there right now — or ever, in the case of Painted Skin: The Resurrection, a sort-of sequel to 2008’s Painted Skin (which one need not have seen to enjoy Resurrection).

Starring two of China’s most glamorous leading ladies, Resurrection is a lavish fantasy following the adventures of fox demon Xiaowei (Xun Zhou), who can become human only if someone voluntarily offers up his or her heart (as in, the actual blood-pumping muscle). Though she’s been rampaging cross-country trying to find a suitable man-donor, she spots a likelier candidate in Princess Jing (Vicki Zhao), who wears a delicate gold mask to conceal her scarred face. Jing has fled her royal duties to confront her true love, General Huo (Chen Kun), who is a generally nice guy and most excellent archer, but not a huge fan of the messed-up face. But wait! Supernaturally pretty Xiaowei has just the solution, and it definitely involves swapping bodies (and all-important internal organs).

But Huo is secondary here. Less a love story than the tale of a toxic friendship, Resurrection adds levity with a subplot about a demon hunter (William Feng) who falls for Xiaowei’s bird-demon sidekick (Mini Yang), and has plenty of over-the-top flair, with abundantly obvious CG and Kris Phillips’ campy performance as an evil wizard. It was a huge hit in China but will probably only reach a small audience here, so don’t miss your chance.

A different type of demon — the mental, fucks-with-your-emotions kind — infiltrates Hara-Kiri: Death of a Samurai, the latest from prolific director Takashi Miike. The speed of his output is nearly as dizzying as the array of genres represented in his filmography, though for Hara-Kiri, he sticks with the samurai milieu of his hit 2010 epic, 13 Assassins. That said, despite its equally suggestive-of-gore title, Hara-Kiri — which takes place some 250 years earlier than Assassins — is no limb-lopping extravaganza. Rather, it’s a surprisingly somber drama, with violence used judiciously (albeit gruesomely).

Solemn samurai Hanshiro (Ebizo Ichikawa, an acclaimed kabuki theater actor) appears before a feudal lord, humbly asking permission to commit ritual suicide in the man’s courtyard. But in this house, skepticism reigns over honor, thanks to a recent rash of “suicide bluffs” — it’s not death these downtrodden men seek, but sympathy in the form of handouts or job offers. In fact, there was a suicide bluff recently, right there in the courtyard. A young man named Motome. It ended badly.

It’s soon clear that Hanshiro and Motome are connected, and the circumstances that motivate their extreme behavior are indeed tragic and deeply felt. Miike takes his time getting there, though, and fans seeking breakneck mayhem may be disappointed. Side note: for whatever reason, Miike filmed Hara-Kiri in 3D, but it’ll be screening in old-school 2D during its local run at the Four Star.

PAINTED SKIN: THE RESURRECTION and HARA-KIRI: DEATH OF A SAMURAI open Fri/17 in San Francisco.