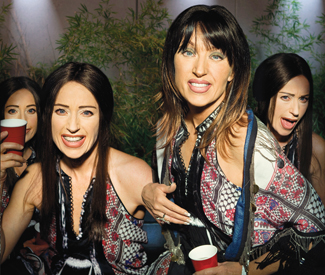 VISUAL ART Cindy Sherman is nearly always described as a groundbreaking postmodern photographer and pioneer. The mostly excellent, just-the-hits traveling retrospective currently visiting the San Francisco Museum of Modern Art is carefully curated to justify that praise. All the high points of Sherman’s prolific career are here, and her virtuosic scrambling of photographic conventions and assumptions are shown in high relief. As an act of institutional pedagogy, it’s certainly effective if not exactly revelatory.

Luckily for us, in pairing her retrospective with the “Stage Presence: Theatricality in Art and Media” group show across the hall, SFMOMA makes interesting work of recasting Sherman as primarily a performance artist who utilizes photography as a tool. “Stage Presence” curator Rudolf Frieling’s scruffy show fashions a strong lens through which to see Sherman’s work from new angles, and if you bounce from one show to the other you’ll see undercurrents drawn out by that context.

The retrospective leads off with “Untitled Film Stills,” Sherman’s breakout 1980 series of 69 images, presented together in the show’s first gallery. These black and white photos, staged and composed to resemble European film promotion stills, show Sherman in costume and makeup inhabiting dozens of distinct, recognizable tropes and types. These are not self portraits, and understanding that point is a kind of prerequisite for digging beneath Sherman’s body of work. Although she appears in every image, Sherman is an actor playing a role. Or more precisely, she’s performing the act of recreating herself and slipping between multiple roles.

Completed when Sherman was 26, “Untitled Film Stills” sets out the major themes she would follow for the next 30-plus years: fascination with media and film, deliberate manipulation of photographic conventions, ability to stitch together and swap out identities like costumes, a flair for storytelling, and a complicated allegiance with the characters she invents.

And about those pictures. As both photographer and model for her images, Sherman appropriates, tweaks, and ultimately tries to outrun established photographic idioms. At the heart of these single-frame performances, Sherman couches the act of slipping into character within familiar conventions of portrait work — series formats include publicity stills (“Untitled Film Stills”); centerfolds (her 1981 work commissioned for and then scrapped by Artforum magazine); classical portrait painting (over represented, frankly, in this show); headshots (here, from 2000); and large-scale society portraits (from 2008). By turns creepy, gaudy, lurid, ugly, garish, and exhilarating, her photographs put up a testy fight to keep you from instantly or casually objectifying the woman or man — usually woman — in the image.

While each tableau is meant to show a persona, it’s also meant to keep you at distance. Her facial expressions throughout are steely, usually blank-ish, and they project thin personalities that reveal only slivers of the people behind them. Across series she repeats the same narrative beat in her work, namely a moment of resistance in her characters to being fully captured on film. She’s rubber and you’re glue. Your gaze bounces off her and sticks to you.

Still, don’t be fooled by what may seem to be sarcasm — she is emphatic and earnest about the complications of photography’s lies, and by extension about the sum of ways we can possibly present ourselves to each other. One of the main reasons art historians love Sherman’s work is that she injects complicated arguments into the trajectory of identity and liberation theory. In her work, you see traces of an adaptable, slippery identity that represents itself only by wearing and exchanging costumes and masks. The self in Sherman’s work is an actor that acts, and never leaves the stage. It’s not that mastery of appearances allows for the actual presentation of the real, it’s that appearances are the only thing there is. There is no presentation of the real, only the constructed reality of the presentation.

Viewed together with “Stage Presence,” Sherman’s work fills in for performance artists you might find oddly absent across the hall. She stands in for both Mike Kelley and Paul McCarthy, as well as Bruce Nauman. All the same concerns that those artists (yes, male) are known for — forces played out in the body by abjection, failed desire, absurdity, and the grotesque — abound in her work. In this context it’s hard not to see both commentary on and participation with those artists in her clowns, fashion, and grotesque series. This angle is made most explicit by her work of the last dozen or so years. Less referential to film, her headshots and society portraits since the late 1990s include more plausible, abject characters whose constructed lives and identities are in various states of decay.

For another day or two, Sherman’s photographs can be seen in contrast with the exuberant Jean Paul Gaultier retrospective at the De Young Museum (closing August 19). In some ways Sherman is the yang to Gaultier’s yin, both addressing the slippery nature of identity and the performance of norms through the clothes and apparatuses of presentation. Highly recommended.