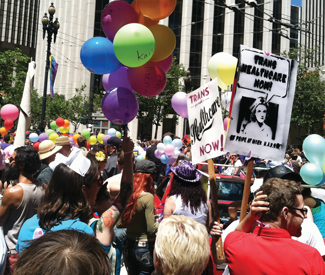 When the Human Rights Campaign, the national LGBT rights group, released its latest scorecard, rating companies by their support for LGBT issues, the healthcare giant Kaiser scored 100 percent. In June, the company’s float in the San Francisco Pride Parade was packed with happy employees.

But as the float passed through the streets, it was met by a group of protesters. Pride at Work complained, loudly, that Kaiser — for all its efforts to work with the community — excludes transgender care from its standard policies.

“We said, let’s push Kaiser,” said Sasha Wright, an organizer with Pride at Work. “They say they’re good for the community. Let’s show them that the queer community demands this.”

It was a perfect sign of the city’s struggle with trans health care. In many ways, San Francisco is exemplary — this is a long ways from Chattanooga, Texas, where state legislator Richard Floyd tried to pass a law instituting steep fines for people who can’t prove their genders match the designated genders of public bathrooms.

And with Healthy San Francisco officials’ recent decision to cover transgender and care, it’s likely this city is leading the nation in trans health.

But that’s a limited distinction — because trans people everywhere, even here, still face sometimes daunting obstacles in getting access even to basic care. And the struggle to change that is becoming a high-profile (and increasingly successful) political fight.

Kaiser’s insurance plans are typical of the industry. In its 2012-2013 “Traditional Plan,” Kaiser lists “transgender surgeries” among the services excluded from coverage, along with massage therapy and cosmetic surgery.

And Kaiser’s not alone.

Medicare, the federal health plan for low-income people, specifically excludes transgender health care. MediCal, the state version, is required to cover trans care — but will often deny individual applications. And many of the doctors and surgeons who accept MediCal (and many don’t) are unfamiliar with transition-related care.

Then there’s plain old discrimination. A troubling number of people report being denied healthcare — not just healthcare related to their gender identity — because the doctor they saw didn’t want to treat a transgender person.

The State of Transgender California, a 2008 survey by the Transgender Law Center, found that 30 percent of transgender people in California reported that they have “postponed care for illness or preventative care due to disrespect and discrimination from doctors or other healthcare providers. Over 40 percent did so because of economic barriers.”

The study also found that 35 percent of respondents “recount having to teach their doctor or care provider about transgender people in order to get appropriate care.”

To make things worse, American health insurance is overwhelmingly employer-based — and unemployment among trans people is epidemic. A 2011 study from the National Center for Transgender Equality found that trans unemployment was double the national rate and that 47 percent of trans people surveyed had been fired or overlooked for a job.

But with high rates of poverty and discrimination among transgender people, affording these medically necessary procedures can be nearly impossible. Even in San Francisco, where some politicians and powerful organizations advocate tirelessly for transgender rights, many people are forced to go outside the system altogether to take care of themselves.

“We see transgender folks either not being able to make a transition, or having to spend a lot of money,” said Wright. “I don’t know if you’ve ever been to a top surgery party, but they’re common in San Francisco.”

Mia Tu Mutch, a member of San Francisco’s Youth City Services Committee who advocates for LGBTQ rights inside and outside City Hall, recently started a group that supports and raises funds for people who are transitioning.

“Me and my partner have been shocked at trans incompetency in San Francisco,” said Tu Mutch. “We’ve had several really bad instances of doctors refusing to treat us when they found out that we were trans. There’s still education needed.”

Tu Mutch said that, even though she is covered by a high-quality, trans-inclusive insurance plan, she has spent at least $10,000 out of pocket on transition related expenses.

“People are usually told, ‘get a good job, save all your money,'” she said. “But I’ve been spending 80 percent of my money on transgender related care for the past couple of years. I don’t think the whole ‘pull yourself up by your bootstraps’ thing works.”

HOPE ON THE HORIZON

But the situation is starting to change. In fact, trans organizers say that the medical, insurance and political establishments — particularly in California — are beginning to realize how backward the system is and are open to dramatic changes.

“It is an exciting time,” said Dr. Dawn Harbatkin, executive director or San Francisco’s Lyon Martin Health Center, which offers free and low-cost service to trans people “I didn’t think I would see this during my career.”

Thanks to groups like Pride at Work and the Transgender Law Center (TLC), city workers in San Francisco and Berkeley are now covered by the trans-inclusive version of Kaiser’s plan. The TLC, along with Lyon Martin and Equality California, came together to form Project Health in 2010, which convinced Healthy San Francisco to drop its transgender exclusions.

Tu Mutch has also worked this year to start FEATHER, or Fundraising Everywhere for All Transitions: a Health Empowerment Revolution.

Meanwhile, lawmakers in Sacramento, and even nationally, are also chipping away at the transgender discrimination that plagues the healthcare system.

Harbatkin told us that there isn’t a specific set of services that make up transgender health care.

“Really good transgender medicine means that you are providing good primary care, that you’re treating a patient as a whole person and taking care of all of their health care needs,” she said.

Lyon Martin provides preventative care like pap smears, breast exams, and prostate exams, treatment for chronic issues like hypertension and diabetes, as well as transition-related care—services that assist transgender people in transitioning to a body that reflects their gender identity.

“The bigger part of providing good medicine is about being culturally competent, culturally sensitive,” Harbatkin said. “Knowing how to address people respectfully and with their appropriate name and pronoun. Knowing about their legal name versus preferred name, or gender markers in terms of billing issues.”

One obstacle transgender patients face is doctors who are unfamiliar with transition-related healthcare, such as hormone therapy and surgeries. But often, trans people are denied care that doctors know well and would perform on cisgender patients, simply because of their gender identity.

Then there’s the challenge low-income people face in finding doctors who accept MediCal.

Harbatkin cited the example of an orchiectomy — surgical removal of the testicles, a procedure done by urologists. Finding a urologist who takes MediCal is fairly routine.

“But finding a surgeon who would do a vaginoplasty who accepts MediCal, that is more challenging,” she said.

And some urologists might perform an orchiectomy for someone with testicular cancer — but refuse to do so for someone who is transitioning from male to female.

That type of discrimination has caught the attention of Assemblymember Tom Ammiano, and his office has been working for several years to change it.

Ammiano aide Wendy Hill has been focusing on eliminating transgender health barriers in California for years. Thanks in part to her efforts, the California Department of Insurance now interprets existing gender equity legislation to include transgender people.

Now Ammiano’s office is taking on the Department of Managed Health Care and has been documenting cases of discrimination.

“When a citizen calls the Department of Managed Health Care, their helpline, they tag the call so that they know what’s going on,” Hill explains.

The sort of problem she sees: “A person goes in to be treated for what could potentially be pneumonia, but the physician is having trouble seeing this person because their papers say they’re male but they are trying to see a gynecologist.”

Hill said some of her most interesting moments have been outreach meetings with community members and local businesses.

Ammiano, who created Healthy San Francisco, said he was thrilled about the program dropping its transgender exclusions. “This has been in the works for a while,” he said. “We always fully intended to make sure that everyone who needed it was covered.”

Nationally, he said, “I think it’s an uphill battle around eradicating the transphobia and getting services provided without any hassle, but there’s light at the end of the tunnel.”

Trans: Thrive, a project of API, serves as a drop-in center for transgender people, including many who show up there as one of their first stops after coming to San Francisco to escape discrimination and danger in their hometowns. Trans: Thrive provides counseling, computer labs, food, activities, and an all-important clothing closet to cut the extensive costs of a whole new wardrobe that better reflects a person’s gender identity.

Lyon Martin is “a federally qualified health center, so we take MediCal, MediCare, and many commercial insurances and Healthy San Francisco,” said Harbatkin. “And for patients who are uninsured, they are put on a sliding scale based on income and family size. And we continue to see people whether they can afford it or not.”

That means even people with little or no income can access transition-related surgery at Lyon Martin. This can be essential for people who otherwise would rely on MediCal.

The situation will actually be improved with the changes to Healthy San Francisco, as people who access healthcare through the program will have more options for surgeons and specialists.

In the 2008 State of Transgender California report, the TLC made a series of recommendations — and to the surprise of even the TLC staff, many have been adopted.

For example, the Affordable Care Act bars discrimination against people with pre-existing conditions — a term used to deny coverage to trans people. Most medical schools still don’t teach transgender healthcare, but on a local scale, Lyon Martin is working to train healthcare professionals and students to provide quality, culturally appropriate care to transgender patients with a residency program.

But one of the key recommendations — “Enact federal and state legislation prohibiting transgender- and gender-specific exclusions that limit access to comprehensive, quality care in public and private insurance plans” — is still a ways off.

As far as state legislation goes, said Hill, “Assemblymember Ammiano is definitely there. But the Legislature is not there yet. We don’t have enough support for that, to get a bill down to the governor.”

Kristina Wertz, director of Policy and Programs at the TLC, says that significant progress has been made on the recommendations that the 2008 report included.

“We’re really getting there,” said Wertz. “Things have changed. The world of transgender healthcare is very different than it was five. years ago.

“Right now there’s a lot of advocacy to build on the good laws that we already have and make sure they’re effectively implemented.”