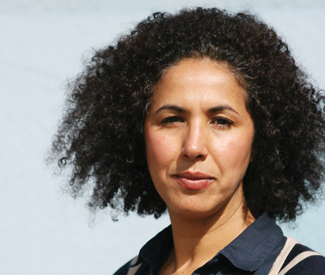 GOING BACK TO SCHOOL: BOUCHRA SIMMONS

The first thing you notice about Bouchra Simmons is her hair. Her black curls are bold and larger than life, much like Simmons herself.

Simmons moved to the United States from Morocco in 2008. A single mother of a nine-year-old daughter, Simmons is taking English as Second Language classes as well as business classes and working towards a certificate in management at City College.

Somehow, she also found time to become Associated Students President at the Downtown Campus. That campus is one of several that the college is now looking at to consolidate. While the analysis isn’t complete, the school might move students out of the valuable downtown property to lease it, which may generate $4-5 million a year for the school.

And the ESL classes which Simmons takes could face cuts, too.

Like many other students, she relies on Muni to get around, even to drop her daughter off at childcare and the Downtown Campus is easier for her to commute to than other campuses around the city.

“We students are not lazy, we have goals, we’re craving education,” Simmons said. She is going to work with one of the college’s new accreditation workgroups and plans on emphasizing the need for the downtown campus in particular.

Her dream is to be able to earn a living wage to support her family. “I’m a single mom, and going back to school empowers me,” Simmons said. (Fitzgerald)

When asked to describe her life, Rosa Morales, 18, said, “I was born, I loved the Jonas Brothers, and then I died.”

An SF native who just graduated from the Ruth Asawa School of the Arts, she is passionate about making films. Her work focuses on social issues, often touching on the lives of Latino housekeepers or how toys affect young girls’ body image.

Morales has many achievements, but her math grades weren’t among them. At 18 years old, Morales decided to go to City College, a place she says will allow her to learn basic math skills at her own pace.

“If I were not able to go to community college, I wouldn’t go to school,” Morales said.

She smiles, flashing her braces, as she says that she has registered and gotten all the classes she needed for the semester, including math. Other students her age aren’t as lucky.

Classes at California’s overburdened and underfunded community colleges are becoming harder to get into, including at CCSF. Students like Morales may soon get priority, so they can get the classes they need to transfer to a four-year university on time.

“All of [my counselors] say that I can’t transfer in two years, but I hope I can do it,” she said.

When asked how she feels about the loss of ESL classes and non-credit courses, Morales said that the issue affects more than just her. Out of the 10 extended family members she lives with, five of them (including herself) are enrolled at City College, all for different reasons.

“My uncle takes night English classes,” she said. Morales’ uncle is a housekeeper, and being unable to speak English makes it a lot easier for employers to accuse him of stealing money, and more likely for him not to get hired at all, she said.

“I know that knowing them, they’d give them up for me if they had to. But I know that from a selfish point of view, of course I want classes to be allotted to people like me… I don’t know what I’d do without those classes,” Morales said. But, she added, ” I can’t genuinely say, ‘Give them to me,” without there being a tug in my heart.” (Fitzgerald)

FROM STUDENT TO INSTRUCTOR: GALINA GERASIMOVA

City College doesn’t just churn out degrees. It creates opportunities. For Galina Gerasimova, that opportunity led to a great job with the school.

A part-time instructor at the college for about eight years now, Gerasimova moved to San Francisco from the Ukraine in 1997 and immediately began taking ESL classes at the school. With a teenage son to take care of and not a lot of money to survive on, she not only mastered English but was also inspired by the warmth and dedication of her instructors.

As a recent immigrant, “you’re scared, you’re frustrated, you don’t really know what to expect,” Gerasimova said, explaining that ESL teachers are often the first people English learners really interact with after moving to the United States. “(They) helped me a lot … and of course that actually influenced my decision to become an instructor at City College.”

By 2000, she became an instructional aid, all the while pursuing an Associate’s Degree in computer sciences. She then transferred to San Francisco State University and earned a degree in Human Physiology — a subject that complemented her previous studies in biology, chemistry and physics in the Ukraine, where she worked with war veterans.

Gerasimova remembers how easy it was to enroll in all the classes she needed at CCSF and she laments the steady deterioration of public education in California.

“It just became more intense over the past year,” she said, “and I see how that impacts City College and our services.” (Bloomberg)