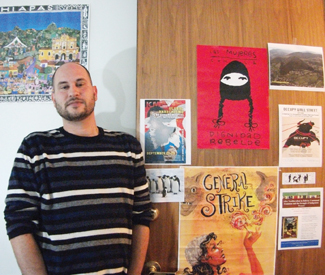 This semester, the California Institute for Integral Studies (CIIS) will start a new Anthropology Department featuring teachers who are grassroots organizers with decades of experience, including Boots Riley, Roxane Dunbar-Ortiz, Sasha Lilley, and Chris Carlsson.

The program’s goal is to create “activist scholars,” to get students into communities outside the institution, and to use their research and intellectual opportunities at the school to move social justice projects forward. And the man who organized it all is an unrepentant anarchist.

“The most distinguishing character of anarchism for me is prefigurative politics — creating the new within the shell of the old,” Adrej Grubacic, the new department head, told us.

His classes come at a time when anarchism is being more widely discussed in the US than it has been for generations. Non-hierarchical general assemblies and consensus-based “direct democracy,” long practiced in anarchist and other leftist circles, swept across the country along with the Occupy movement last year.

Anarchists have been associated in the public eye with everything from spirit-fingered affirmations to the masked, black-clad protesters smashing bank windows and scrawling anti-corporate messages on walls. But Grubacic says it’s more than that.

As anarchism exploded into practice in Occupy’s tent cities, it was also experiencing a renaissance in the ivory tower. The North American Anarchist Studies Network was founded in November 2009, and since has brought together a growing number of professors who want to explore and teach anarchism through annual conferences.

Big names such as Yale Anthropology Professor James Scott have declared themselves anarchists. In a country where the study of economics is usually code for the study of capitalism, professors longing to talk alternatives are coming forward in droves.

It’s more than a little ironic that, within an ideology focused on a lack of hierarchy, it can be hard for those on the street to connect with those in the lecture halls. So how can the academic-types truly support The People?

From Zapatista schools in Mexico to universities run by the Landless Worker’s Movement in Brazil to popular universities throughout Canada and Europe, people all over the world have developed institutions based on anarchist and Marxist principles.

Now, in San Francisco, Grubacic is hoping to do the same.

A historian who was an anarchist by age 13, Grubacic grew up in socialist Yugoslavia, a country engulfed in brutal civil war by the time he reached his 20s.

“I was raised a Yugoslav,” Grubacic says. “So I was raised to be a citizen of a country that doesn’t exist anymore.”

He was teaching history at the University of Belgrade, but his political beliefs became a problem.

“The political cultures and political groups in power were either Serbian nationalists or these hyper-capitalists,” Grubacic told me. “And going after them, because I was publishing and I was doing a lot of things, was—let’s say, not a smart career choice.”

It was with input from his mentor, famed leftist writer and academic Noam Chomsky, that Grubacic left the crumbling Balkan state for his own safety. After a frustrating stint at University of San Francisco, he found CIIS.

“This is the first place where I think that I was hired because I was an anarchist, or I am an anarchist. It’s kind of funny,” Grubacic says.

Founded in 1968, CIIS grew out of the California Institute of Asian Studies, and has quietly taught holistic approaches to psychology and integrative approaches to psychology, spirituality and the humanities since then . Today 60 percent of CIIS students are studying clinical or counseling psychology. The Anthropology and Social Change program is part of the School of Consciousness and Transformation.

“It’s the only department like it in the United States,” Grubacic says. “This is going to be one of the few places where anarchism is going to be studied.”

“So anarchist social theory, anarchist education, anarchist ideas in general. We are going to study them, seriously, because they need to be recognized seriously. It’s a beautiful history, it’s a beautiful tradition,” he says. “How important it is, I think, is revealed, by the recent rediscovery or reinvention of anarchism at Occupy. So I think that it’s more relevant than ever to create a space where anarchism will be studied.”

A CIIS education doesn’t come cheap. Two years in the masters program costs at least $35,000, and to earn a PhD will cost more than $60,000. Scholarships and financial aid are available, but Grubacic called the question of access to this program “a huge question.”

“It’s troubled me from the very beginning,” he says. “We are creating an experiment. It’s a social justice, community-based program in a private school.”

He hopes, however, that students will learn applicable skills in the program. Classes on radio, film, and writing, Grubacic says, will give students practical skills. “They will be able to continue, either as academics and go to get their PhDs, or to join the non-governmental sector, to work with NGOs, to work with community groups, to work with labor groups.”

Not the most lucrative professions, perhaps, but likely the chosen fields for many Anthropology and Social Change students.

Grubacic calls creating a program based on teaching grassroots and subversive knowledge in an elite institution “a paradox,” and one he’s not alone in. Grubacic got advice on the issue, he said, from Anibal Quihano, a Peruvian scholar known for his theories on colonial power who now teaches sociology at the Binghamton University in New York.

In fact, Grubacic practically convened a conference of post-colonial and anarchist scholars to help develop Anthropology and Social Change. Grubacic sent the program’s description around to everyone from his buddy Chomsky to Immanuel Wallerstein to World Social Forum organizer Boaventura de Sousa Santos. He got advice, too, from organizers at the Popular University of Quebec and the Popular University of Social Movements, a school in São Paulo, Brazil run by the landless workers’ movement there.

He reached out to contacts and friends of professors in the university, as well as hanging out in gathering places and striking up conversations with those who showed up. He told one story of doing this covert outreach in the Tenderloin National Forest, the botanical garden and neighborhood spot just 10 blocks from CIIS’s building on Mission and 11th streets.

“Some people were completely uninterested and thought, what’s the purpose? Who are you, with this weird accent? Go home,” Grubacic laughed. Some, though, were more receptive, including a woman who said the program could help with those fighting against San Francisco’s problem of environmental racism.

“This person told me that she thinks activists can come to a particular community, do an ethnography, do research, and then present that research to people in the city, and show the people who have power in the city to make decisions why such behavior is unjust,” Grubacic said.

In the end, that is essentially how the program will work. Students will partner with local organizations, neighborhood groups, or other affiliated people working on social justice goals, doing research to help further their goals.

In addition to classes and research projects, students will participate in “convivias,” one of the most unique aspects of the program. People from the public, scholars, and others with special knowledge will hammer out ideas with students in week-long “political laboratories.” Revolutionary art will be practiced in a convivia called “Atelier of Insurrectionary Imagination.” And Grubacic and his students will turn a certain vacant part of the CIIS building into an “Emergency Library,” a place for books as well as what the program description calls “scholars on call, responding to the emergent needs of the communities in struggle, who might be in need of legal advice, activist companionship, scholarly input, or a media suggestion.” The convivias have corresponding student work-study positions — yes, there will be a paid Emergency Librarian.

CIIS spokesperson James Martin said Grubacic brings a lot to the school: “The thing I’m really excited about is that we’re engaging the local community. We live in San Francisco for a reason. This is one of the places in the world where all these intellectuals come together who have the passion to try and change things.”

Despite the paradoxes and problems that come when the elite meets the grassroots, Grubacic has high hopes. “We need to redefine what it means to be an intellectual who works within academia,” he said. “And the only way to do this is to become a part of a larger social movement’s formation, that is aimed at changing society. We cannot offer much. But we can offer something.”