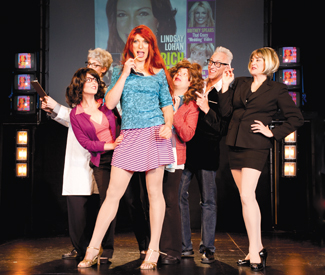 THEATER Opening night of Project: Lohan arrived on the wobbly heels of its subject’s latest headline humiliation: another car accident for 26-year-old actress, singer, model, and tabloid treasure Lindsay Lohan. While a less serious one than the month before, the crash still served as a fitting epilogue to the cross-dressing mocudrama created by playwright-actor D’Arcy Drollinger (wielder of 2010’s riotous Scalpel!), a satirical but hardly uncompassionate trek into celebrity oblivion now making its West Coast premiere at the Costume Shop, American Conservatory Theater’s new performance venue on Market Street.

Actually, though it reads like one, Project: Lohan isn’t really mocking at all, since all of its crass and buffoonish dialogue comes directly from sources in the public record — trial transcripts, 911 calls, chat shows, magazine copy. Lohan is a pretty straightforward exercise in “Laramie”-style documentary theater executed in less-than-straight camp mode. The approach ends up being more than mere parody, offering some critical distance on both the docudrama genre itself and the media-born regime of beauty and success that sacrifices pampered lives like Lohan’s to the general distraction and degradation of the public imagination.

Not to put too fine a point on it. Under assured direction by Tracy Ward, the whole thing plays as high-octane comedy. A panoply of personalities crisscross the stage, if only for a hot second, including the likes of Tina Fey, Jane Fonda, Meryl Streep, Britney Spears, and James Franco (in Franco’s case a headshot on a Popsicle stick serves nicely); and the piranha-like Lohan peer group of Paris Hilton, Scarlett Johansson, Hilary Duff, et al. With a sharp and vivacious Drollinger in the role of Lohan, flanked by a quick-change cast of cross-dressing comedic talents (Liz Anderson, Allegra Rose Edwards, Michael Patrick Gaffney, Cindy Goldfield, and Sara Moore), it’s a 90-minute feast of campy impersonations and shrewd comic timing.

But in sending up the freak show that is celebrity culture, Project: Lohan‘s despoiled subject unexpectedly gains back some of her humanity. Meanwhile, the focus shifts gradually from Lohan to our complicity with the celebrity mill as ready voyeurs-consumers of its pathetic winners and vaunted losers. At the nadir of scandal but the height of publicity, Lohan repeatedly moans about alternately safeguarding or recharging her “career.” But by now it’s clear that the debauched sideshow of her “personal life” really is her career already.

Even in Kent Taylor’s expertly doctored photographs — which replace Lohan with Drollinger (in Lohan drag) on tabloid pages, magazine covers, movie posters, and the like (all projected on a screen at the back of the stage)—the barrage of glitz suggests the sharp arc of a talented girl’s mean ride on the celebrity roller coaster. And Richard Neveu’s final video montage adds a mesmerizing and chilling coda to the whole romp, as we watch a smiling child model morph jarringly into a burnt-out “star.”

But the easy pickings of the public record are as much a problem as a boon to the script itself, at least at first. If the play owes its narrative shape to a balanced diet of National Enquirer, theater of the ridiculous, and the self-congratulatory documentary theater of the Tectonic variety (whose style has ripened into parody before, as in 2009’s Zombie Town), it’s the strict adherence to a chronological docudrama approach that girdles it in a relentless rhythm that, punctuated by datelines and pull-quotes, quickly becomes monotonous — and undercuts somewhat the natural hilarity in the rowdy stage show.

Nevertheless, there’s a thematic consistency to the repetition that slowly emerges as the real point of Project: Lohan‘s satirical spree: Even as the chameleon cast, in perennial transformation, riffles through half-concealed wardrobe racks, the increasingly lost starlet they’re tracking engages in an almost pathological obsession with changing her hair color and reprising her worst exploits.

We’re left wondering just whose “project” Lohan really is: her manager-mother’s? The media’s? The complex-inducing mass entertainment complex? Documentary theater’s? Could she ever be her own project in such a whirlpool of bad taste?

Maybe in the middle of all the babble, she actually says it all herself.

“And for everyone who thinks I’m crazy? I’m not,” announces Lohan to a world of greedy cameras and microphones. “I’m just trying to act.”