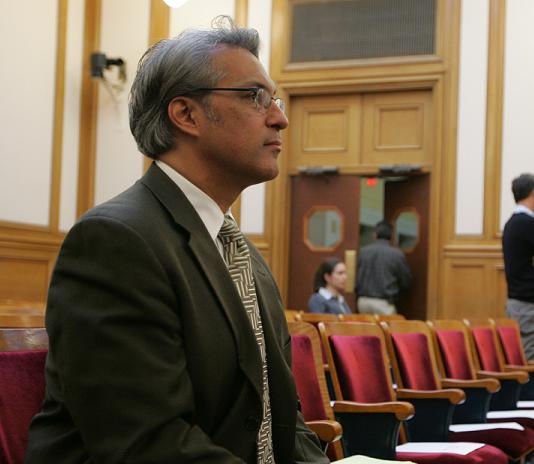 The Board of Supervisors this week adopted a plan for considering ousting their former colleague, suspended Sheriff Ross Mirkarimi, on the official misconduct charges brought by Mayor Ed Lee in connection with Mirkarimi grabbing his wife’s arm on Dec. 31. The Ethics Commission is scheduled to make its final recommendation on Aug. 16, after which it will cull together the mountain of documents and evidence developed over the last four months.

Ethics Commission Executive Director John St. Croix tells the Guardian that it will take at least three weeks after the commission votes to compile an official record that already includes documents that now fill three five-inch-thick binders, which will grow with the “findings of fact” and recommendations that the commission will adopt on Aug. 16.

So the board won’t formally get the case until Sept. 6 at the earliest, at which point it will have a City Charter-mandated 30 days to make a decision, which requires at least nine votes from the 11-member board to remove Mirkarimi from office. Board sources say they want to give supervisors some time to review the voluminous record before the hearing, but still allow for a continuance if necessary, making the likely hearing date Sept. 18 if all goes according to schedule.

“Everything we have so far is available online, so if they wanted to get a head start, they’re welcome to,” St. Croix said of the supervisors.

Despite the fact that the commission spent lots of painstaking hours ruling on the admissibility of evidence – including cutting out most of the 22-page declaration of Lee’s star witness, Mirkarimi neighbor Ivory Madison, with commissioners ruling it was a prejudicial attempt to “poison the well” – St. Croix said the entire record will be passed on to supervisors, with strike-throughs or similar indicators for evidence ruled irrelevant or prejudicial.

“It’s got to be easy to understand because once the board gets it, the 30-day clock is ticking, so it needs to be clear,” said St. Croix, who says he is still weighing how much of the evidence can be transmitted electronically versus in paper form.

The Ethics Commission opted not to explore accusations that Mayor Lee committed perjury on two separate issues during his live testimony, but the issue of whether he consulted with any supervisors is likely to come up again as it goes to the board. Supervisors, who essentially act as jurors in these proceedings, have been legally barred from discussing the case, particularly with Lee.

Building Inspection Commissioner Debra Walker said her friend Sup. Christina Olague told he that Lee once asked her about filing charges against Mirkarimi. Olague denied it, but then told reporters that she may recuse herself from the case. One other supervisor is also rumored to have discussed the case with Lee (who denied it under oath).

When Mirkarimi attorney David Waggoner addressed the board on Tuesday, he asked them to affirmatively declare they have not discussed the case with anyone before deliberating. Any supervisors who recuse themselves would become de facto votes to keep Mirkarimi in office because doing do still takes nine votes, no matter now many supervisors actually vote.

Waggoner also objected to the short schedule – which includes a 10-minute presentation by a representative from Ethics, 20 minutes by the Mayor’s Office, 20 by Mirkarimi’s side, a five-minute mayoral rebuttal, and unlimited questions from supervisors and public comment – saying that it belies the serious and unprecedented decision to override voters and remove an elected official.

“This proceeding is extraordinary in its nature,” he said, objecting to the board adopting essentially the same procedures it uses for appealing routine Planning Commission project approvals.

But St. Croix said he welcomed the board’s shortening of his agency’s presentation, saying its recommendation and the record it compiled should speak for itself. “I don’t even know what the commission would present,” he said. “To try to sell it is not seemly.”