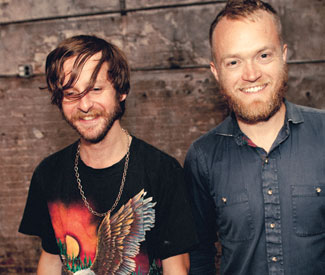 MUSIC Half a decade after their last album release, Two Gallants are back. As you might recall, the folk-punk duo made up of childhood pals guitarist-vocalist Adam Haworth Stephens and drummer-vocalist Tyson Vogel was already something of a legend in San Francisco — known for playing both BART stations and arenas — when it took an unexpectedly lengthy break. There were three years between them playing together, five years between records (their last being 2007’s self-titled LP on Saddle Creek).

That time apart proved both dramatic and fertile, with new side projects and solo records, personal struggles and rebirth. “Refreshing” is the word Stephens uses most frequently as he readies for a plane flight to Germany in the morning to play a few European festivals with his old friend.

After they return to SF from Deutschland, they’ll have a moment to relax in their hometown, and then will head back out on the road for their first official tour in years, hitting both Outside Lands and an Outside Lands night show at the Rickshaw Stop along the way, followed by, presumably, world reintroduction.

Before the hiatus, the duo was on a never-ending roller coaster of van-venue-van, five years of “incessant, grueling” touring, as Stephens describes it. “So I think we just needed a break, some time from each other and from the whole repetitive cycle of it — refreshing.”

Last year, they were back in the recording studio, spending two weeks at Fantasy Studios in Berkeley, then another week at Tiny Telephone. The new album was created with the help of John Congleton, a musician and producer-engineer wizard who NPR last year declared “Indie Rock’s Unsung Hero Of 2011,” thanks in part to his work on records with St. Vincent, Wye Oak, the Mountain Goats, and others.

Towards the end of last year, in late November, Congleton began work on yet another record — Two Gallants’ The Bloom and the Blight, due for release Sept. 4 on ATO Records.

“Making a record can be pretty trying at times, there’s a lot of dark moments when you’ve been working on something too much and you get caught up in it, you go in this wormhole of indecisiveness but he had a refreshing view on making records,” Stephens says lightly. “He brought out a little more levity, and a little more fun, which I think made the record much more enjoyable than anything we’ve done before.”

You can hear his touch on The Bloom and Blight. While it’s more aggressive, grungier than past Two Gallants output, it’s also more lively, despite the heavy subject matter at hand.

The record begins with a slow-burning, bluesy guitar-led ballad “Halcyon Days,” which bursts open cathartically with Vogel’s thumping bass drum and Stephens’ scratchy howl. The first single, “My Love Won’t Wait,” begins with a similarly exciting build-up — both voices, a capella, harmonizing “You can try/but ain’t no use/I’ll lose it if you cut me loose.” It builds to a crackling garage anthem.

“Our songs have always been pretty dark, but I think these have more of a light-hearted nature to them,” says Stephens. “I think we’ve gotten to the point where we still take the craft very seriously and music very seriously, but we don’t take ourselves quite as seriously.”

The band lifted the veil of the dark, brooding romanticism of the art, but were still able to convey their pain, just without that adolescent pretension. It’s an expected cycle from a long-running band, or really, any long-term relationship. People change, grow, fail to jump back on those horses, or learn to do it their way. In the album closer — folky acoustic ballad “Sunday Souvenirs” — Stephens pines “Memories of what I gave away/lost love/all the love that’s lost along the way/slow down/let me hold you once before you fade.”

“I think we’ve grown up a lot,” he says during our phone call. “[The songs on The Bloom and the Blight] have more perspective of experience and maturity and coming from the perspective of someone that sees the beauty and tragedy in things but doesn’t get as caught up in it.”

Certainly they’ve seen their fair share of beauty and tragedy in the past few years. Relationships have bloomed and crumbled, personal projects have achieved widespread if lesser acclaim. In likely the most tragic events in recent memory, in 2011 Stephens was involved in two separate accidents, a horrific van crash out on tour in Wyoming and a collision on his bike with a car while riding to his practice space in the Mission.

But he’s moved forward. He’ll get back on that touring horse, and is happy to soon be back in the van with his childhood pal, Vogel.