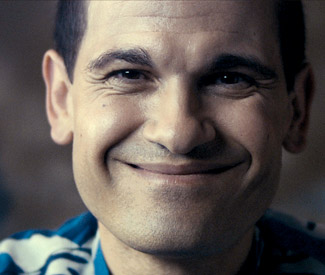 FILM A family tragedy, an international thriller, a Southern-fried mystery, and a true story: The Imposter is all of these things. This unique documentary reveals the tale of Frédéric Bourdin, dubbed “the Chameleon” for his epic false-identity habit. His ballsiest accomplishment was also his most heinous con: though his usual tactic was to invent a persona out of thin air, in 1997, he claimed to be Nicholas Barclay, a real San Antonio teen missing since 1994. Amazingly, the impersonation worked for a time, though Bourdin (early 20s, brown-eyed, speaks English with a French accent) hardly resembled Nicholas (who would have been 16, and had blue eyes).

Using interviews — with Nicholas’ shell-shocked family, government types who unwittingly aided the charade, and Bourdin himself — and ingenious re-enactments that borrow more from crime dramas than America’s Most Wanted, director Bart Layton weaves a multi-layered chronicle of one man’s unbelievable deception. I spoke with Layton and producer Dimitri Doganis on their recent visit to San Francisco.

San Francisco Bay Guardian How did you find out about Frédéric Bourdin, and at what point did you decide to make his story into a movie?

Bart Layton I read about him in a magazine in Spain. It didn’t talk about the Texas incident, but he had this reputation in France; he had traveled the length and breadth of Europe pretending to be an orphan or a damaged child.

That was immediately fascinating. And then I found information about this episode, where he’d stolen the identity of a missing child who looked nothing like him. As a documentary maker, to happen upon a story as extraordinary as that is quite unusual. We wanted to understand more about the kind of person who would be capable of going through with a con or a crime like that, and then obviously the kind of family that would be capable of falling victim to it.

Dimitri Doganis You could only tell the story as a documentary, because if you were to tell it as a scripted narrative film, [the audience] would just say, “There’s no way this could have happened.”

SFBG Bourdin seems to enjoy the attention of being filmed — but was it difficult getting access to Nicholas’ family?

BL They were certainly more hesitant. Also, for someone who’s not very trustworthy, [Bourdin is] not very trusting. I think that was one of the key things: realizing that when you engage with him, when you spend time with him, you are quickly on the receiving end of his manipulation. It’s part of what he does, and what he’s done to everyone.

That felt, to me, like a very crucial part of what this story was gonna be about. He is this very devious person, but how could anyone fail to know their own child? I think you have to allow the audience to experience him directly [and be] on the receiving end of the con man. He makes eye contact with you, and you willingly engage with his story.

The second part of that is talking to the family. They felt that they had had experiences in the media which were incredibly negative — but once they understood that we didn’t have a hidden agenda, they wanted to tell their side of the story. I think they’re really pleased they did.

SFBG Why did you decide to use re-enactments blended into the interviews?

BL In telling a past-tense story, particularly one as vivid as this — if you haven’t got masses of archives, like Capturing the Friedmans (2003) or Man on Wire (2008), you’re limited in what you can do with photographs or animation. Here, you’re experiencing a number of quite accomplished storytellers telling you this very extraordinary story, and I think that inevitably produces quite a visual experience. I wanted to recreate that movie that plays in your head when someone tells you a very compelling but very subjective story.

SFBG With a title like The Imposter, the audience knows the truth about Bourdin from the start — but the film is also able to suggest how his victims might have been fooled.

DD Over the course of the film, you spend a reasonable amount of time with this person who is lots of different things. He’s engaging. He pulls you in. He makes you complicit in this thing that he’s trying to achieve. And you kind of almost root for him, even though he’s trying to do something which seems not only wrong but impossible.

As the film goes on, you understand that he’s also a victim in some ways. He comes from this damaged place, and he’s looking for love and looking for a family. But he also does things which are inexcusable, and at points, I think, looks like a psychopath. When we were talking about making the film, someone asked whether it was the right thing to do, to give this guy a stage from which to hold forth. Here he is, a con man, a convicted felon, and he’s done terrible things to various people.

In a way it felt like allowing him that time wasn’t about being fair to him. It was actually about being fair to the family, or everyone who’s been conned. Because until you actually realize how charming and persuasive he can be, then you have no context for judging all of these people who were taken in by it, whether it’s family members, the FBI, or the American government.

BL Interacting with him is quite complex. It’s not just, “You’re creepy and weird,” it’s “You’re creepy, but now you’re kind of sympathetic. I feel like I need to look after you a little bit. Now I’m falling for your story and beginning to understand your logic.” Those are things we felt the audience needed to have some experience of directly.

DD The audience gets to go on this crazy journey — which is not dissimilar to the journey that we went on as filmmakers — and also follow the journeys that all of these individuals go on as their lives are impacted by these events. I hope the film presents a series of surprises that almost defy credibility — and are only redeemed by the fact that they’re true.