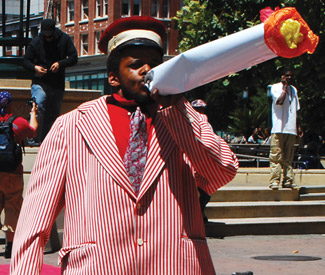 
HERBWISE The neatly-dressed line of donors waiting outside the Fox Theatre on July 21 gawked at the procession coming down Broadway Avenue. Was it the impassioned protesters in wheelchairs, the oversized fake joint, or the realization that stoners could be so… vehement that had them transfixed?


"Obama keep your promise!" On the occasion of the President’s fundraising trip to Oakland — his first to the Bay Area since medical cannabis cornerstone Harborside Health Center was ordered to close in a letter from US Attorney Melinda Haag — medical marijuana had turned out for an unwelcoming party. Obama’s administration has been messing with weed, and patients weren’t about to go quietly into the night. A crowd of hundreds took a lap around the theater, starting and ending at Frank Ogawa-Oscar Grant Plaza.


Of course, the President wasn’t there to see it. Obama was hours late for his announced appearance at the Fox at 3pm.


Pre-march, sharing space in an Oaksterdam University classroom with a bank of healthy marijuana plants, OU president Dale Sky Jones welcomed members of the media to a panoramic look at today’s cannabis advocates. Jim Gray, ex-assistant US Attorney and current Libertarian Party vice presidential candidate spoke, and Harborside’s Steve Deangelo asserted that "if the US Attorneys can come after a dispensary like Harborside, no dispensary in this country is safe." Patients finished out this chorus of voices. The father of a medical marijuana patient — his young boy has Dravet Syndrome, a type of infant epilepsy — despaired that, should Harborside go under, his offspring would never get the right kind of medicine.


"What am, going to ask a drug dealer ‘do you have CBD?’" he asked, hands and voice shaking. "You’re going after the wrong drug."

Oddly enough, considering the drama surrounding its legality, cannabis culture continues to grow unabated. Consider this: there are forms of ingestion that even I, your somewhat-dedicated pot columnist, remain unacquainted with. This is annoying, so upon pot Internet celebrity Coral Reefer’s 1000th tweet regarding "dabbing," I called her out on it. Would she be willing to teach me the ways of this mysterious process?


She would! Dabbing means inhaling the vapor the results from melting butane, or even super-melt cold water-extracted hash. Intriguingly, it resembles nothing so much as smoking crack with a bong, but never you mind, vapor has a lower impact on your lungs and increased potency means its a quicker process than smoking "flower," or regular dried buds.


So: heat up your dabbing surface. Reefer had no less than four kinds of set-ups for dabbing in her apartment, including a "skillet," or flat disc that attaches to any glass-on-glass bong (most dabbing kits will work with your pre-existing water pipe) and various kinds of "nails," or round, rimmed surfaces specifically made for dabbing. Wait until it’s red hot. Take your specially-designed metal pick, or "dabber," and with it rub some concentrate, called "super-melt" or "wax" at most dispensary, onto your post-red-hot surface. Inhale. Clear. Inhale. Repeat process.