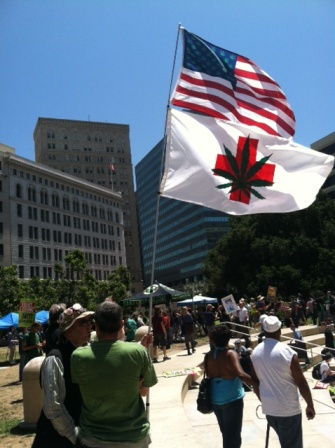 As President Obama arrives in Oakland for a fundraiser today, medical marijuana activists have already made a point with a rally on the steps of Oakland City Hall this morning. Protesters demanded that the President halt raids of dispensaries and other operations legally allowed by California law.

Present at the rally were representatives from Oaksterdam University and Harborside Health Center, two Oakland medical marijuana businesses that have been the target of federal attacks in recent months.

Speakers argued that Obama should use his power to stop threats to these institutions. Oaksterdam, the school that teaches the politics and history of cannabis along with practical knowledge for working in the industry, was raided April 2. Harborside, a dispensary that also offers free health services such as acupuncture and yoga, received a letter from US Attorney General Melinda Haag filing federal forfeiture action July 9.

“This is the time to show them what we’re made of,” said Harborside co-founder Steve DeAngelo at the rally.

DeAngelo emphasized that Harborside complies with state regulations and that the city of Oakland benefits from its success, not least with tax revenue.

Marijuana is illegal under federal law and is classified as a Schedule 1 controlled substance. Schedule 1 drugs “have a high potential for abuse” and “no currently accepted medical use in treatment in the United States,” according to the DEA.

But a procession of medical marijuana patients and caregivers at today’s rallies said that their experiences conflict with the DEA’s claims. Patients recovering from surgeries and suffering from cancer and HIV/AIDS said that medical marijuana provided pain relief and lessened their symptoms without the detrimental side effects of other medication.

“If the federal government takes away my medical cannabis, I could go blind,” said David Goldman, 61, a retired teacher who uses cannabis to treat his glaucoma.

The Compassionate Use Act, which passed in California in 1996 when voters approved Proposition 215, allows both patients and designated primary caregivers to legally purchase marijuana at licensed dispensaries.

One such caregiver, Evelyn Hoch, said that she has been caring for her best friend, a survivor of stomach cancer, for more than 20 years. “She had 90 percent of her stomach removed,” said Hoch. “They gave her six months to live.”

Hoch’s friend survived, but had to choose between constant pain and medication that left her “like a zombie,” according to Hoch. She was prescribed barbituates that, as a side effect, suppressed her breathing. Hoch said her friend was resistant to cannabis recommendations that her doctors gave her unofficially, even before medical marijuana was legal, because she “just didn’t like pot. It wasn’t her thing.” But after she began using medical marijuana two years ago, she has improved significantly.

“She can’t believe the difference,” said Hoch. “She can read again. She’s got a little bit of life. She’s not in bed 24/7, compromised from the side effects of other medication.”

Hoch is a Harborside customer, and says that if medical marijuana dispensaries close, “the only choice patients are going to have is buying it illegally.”

A march was leaving Oakland City Hall at 3pm to bring the message as close as possible to the president.