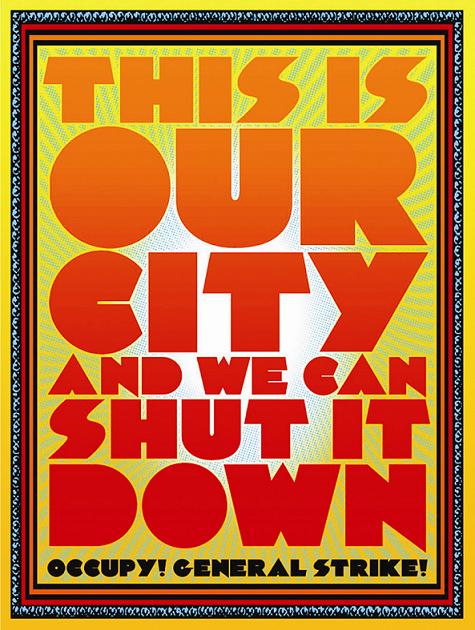 With Occupy’s first anniversary sneaking up on us, has enough time past since its inception to reflect on its urban encampments and frightening conflicts with law enforcement in a rational, reasonable manner? Maybe rational is the wrong word — I’m sure many would agree that the movement’s major contributiont to date was a general firing up of the 99 percent, even of those 99 percenters who would sooner have ridden a bike to work than sit in on GA meeting in Oscar Grant Plaza. Through leaving its agenda undefined, Occupy allowed us all to paint our own hopes and dreams for the world onto it like a piece of drawing paper.

For some more literally than others. This month, an exhibit opened at Yerba Buena Center for the Arts that accumulates the work of 25 Bay Area artists who spun their Occupy dreams into poster form. Chuck Sperry is perhaps one of the most well-known name of the bunch. Sperry’s lived in the Bay since 1989, and recently came home early from a camping trip to answer our questions about his relationship with Occupy, the way he distributed his “This Is Our City And We Can Shut It Down” prints on the day of the Oakland port shutdown, and general “what does art mean” token asks.

SFBG: At what moment did you realize that Occupy was an important event? How did you first hear about it?

CS: Through the beginning of 2011, I was creating an installation for the San Francisco Museum of Modern Art curated by Renee de Cossio, with artists Chris Shaw and Ron Donovan. Each artist would install work in one of three artists’ gallery windows on the side of the SFMOMA on Minna Street. The proposal for the installation was to bring the aesthetic of San Francisco’s poster traditions to painting, and to realize these in monumental form. I wanted this piece to reflect San Francisco’s poster history beginning in the freedom of speech movement through the 1960’s, and to also reflect the psychedelic tradition that gave birth to the rock poster.

While I was working on an 11-foot by nine-foot acrylic painting, I was following the progress of the Arab Spring movements, Tahrir Square, and the gathering Occupy Wall Street movement that was spreading across America. I decided to use my reaction to these events as inspiration for an iconographic painting titled, “Saint Everyone.” I wanted to express the opening mind, and spreading enlightened humanism, the decentralization of power — or awakening sense of people power — to the piece. I used vibrating, reactive colors to paint a figure holding an opening lotus (symbol of enlightenment), against a background of op-art circles, which communicate decentralization — that the background has many centers — like the movement which has no leaders.

“Saint Everyone” was installed at the SFMOMA in June 2011. So I was getting with it by then.

As Occupy Oakland was forming by the fall of 2011, my artist friend Jon-Paul Bail of Political Gridlock was printing his iconographic “Hella Occupy Oakland” posters on Frank Ogawa Plaza (re-named Oscar Grant Plaza) from the point when people were first gathering there. When I say printing, Jon-Paul Bail was printing live, right there, with a table set up in the open, printing and handing people freshly-made posters. In a few short weeks he had printed hundreds, if not, thousands of posters which were being handed out to people there. He was joined there on Oscar Grant Plaza by Melanie Cervantes and Jesus Barraza of Dignidad Rebelde, who created more iconographic posters for the Occupy movement.

SFBG: What led to your decision to make art inspired by Occupy? Was it a different process than your other creative projects?

CS: In September I was in an art show, LA VS. WAR, with Bail, Barraza, and Cervantes, (among others) and we discussed making posters for the November 2 Occupy action to close the Port of Oakland. Fellow artist Chris Shaw — who was involved in the SFMOMA Window Gallery Installation — offered to pay for the production of any Occupy posters through the printing account of rock band Moonalice who was in solidarity with Occupy.

I created “This Is Our City, And We Can Shut It Down.” I usually work with images and take a lot of time to work my art into a design. In this case, the message was so overriding and important that I felt it was my job as an artist to stay out of the way, and let the words and message do their job. So in this way it was different. I used color theories learned in studying the long San Francisco tradition of psychedelic poster art, the use of hot colors against cold colors to make the words read from a half mile away — haha! I wanted a strong, radical message, used with bold nurturing colors that convey a positive emotion. It would not be a typical political poster.

SFBG: How do you want your Occupy poster to be used?

CS: Chris Shaw and I discussed printing our posters on heavy paper stock, and printing on both sides to double the exposure we could give people to our message. You could use this poster as a placard, hold it up over your head. It would make quite an impression and be useful to the action. I stood at Oscar Grant Plaza next to the street and passed out nearly 1000 posters in 45 minutes to the front of the march, so when television camares picked up the action at the Port of Oakland, the front of the march was a sea of my poster with the message, “This Is Our City, And We Can Shut It Down.” No one directed us to make these posters. No one asked. We just did it. And passed them out.

SFBG: What’s been some of your favorite protest art throughout history?

CS: I am very inspired by Emory Douglas‘ art in the Black Panther Party newspaper. I’ve had the honor to work with Mr. Douglas to reprint some of his iconic images. I also am very fond of the French Situationist posters of May 1968, and had the good fortune to print a poster, while I was visiting Paris to make a poster show about five years ago, on the very same press that produced these memorable images. When my artist friend told me that Guy Debord had worked with artists on this very same press, I laughed and dropped to my knees and just could not believe it.

I invited Jon-Paul Bail to collaborate in teaching a class at the Free University of San Francisco, as I’m organizing the art department of that cooperatively-organized free school. We told the story of making posters for the Occupy movement and created a poster for the Occupy Education action last spring. I think the ideas coming together from the Occupy protests will move through society in a very healthy and transformative way. There’s no way to stop people once they have been awakened to their potential.

SFBG: What is the role of art in social protest?

CS: Art can reach many people in many walks of life. I was invited by San Francisco’s Varnish fine art gallery to exhibit at SCOPE / Miami in conjunction with Art Basel Miami art fair. Even in the context of the fine art world I felt it was important to express the social revolution that was taking place through the Occupy movement, and created a piece titled, “Mind Spring,” which expressed some of the same ideas I put in my SFMOMA painting and my Occupy poster. In “Mind Spring”, I created an icon of the worldwide Occupy movement and it’s antecedent in the Arab Spring. The figure wreathed in blooming spring flowers is a representation of the surprising enlightened humanism, the opening mind, the broadened socio-political possibilities which has swept the world in 2011.

I’ve had many discussions about the role of political art over the years. Two solutions to this problem constantly come to mind, first, “content over style” — that content is more important than style. Your message is the most important element in creating art of social protest. Second, that “the personal is political”, your own experience is so very often shared by others all over the world. When you make a piece of art in social protest, and just tell your story from your own perspective, and you do not hold back, you will be describing a situation that is shared by others half a world away. It’s uncanny, but our local problems are very similar to everyone else’s globally. So get in there and try to change what you can from where you are. Many hands make light work.