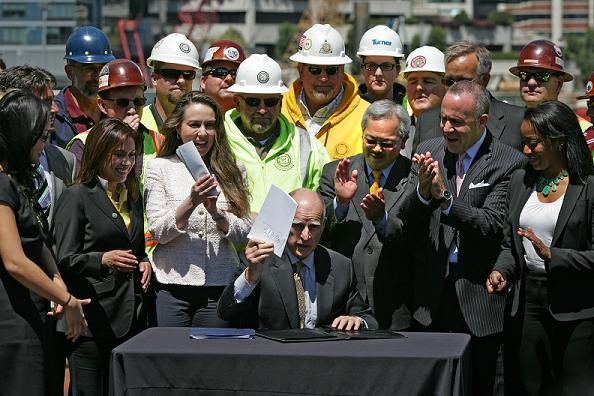 That money – part of the $10 billion that voters approved for the project in 2008 – and $7.9 billion in federal matching funds will go mostly to build the first high-speed rail section linking Merced to the San Fernando Valley. But it also includes money for related projects in the Bay Area, including $820 million to electrify and improve the Caltrain tracks that the project will share, $145 million for BART replacement cars and track improvements, and $61 million for SF’s Central Subway project.

The fact that Brown chose Transbay Terminal – the northern terminus for trains expected to travel at up to 220 mph between there and Los Angeles’ Union Station in less than three hours by the year 2027 – was an indicator of his focus on the long-term benefits of the project rather than its immediate impacts, a theme he emphasized in his speech.

“What this is about is investing in the future,” he said, pointing to the high-rises around him and noting how they were also the products of people with long-term vision. “The buildings that are up here didn’t come out of fear, they came from bold risk-taking.”

High-speed rail has been under increasing criticism from conservatives who complain about its cost (the total project cost is estimated at about $68 billion) and SB 1029 squeaked through the Legislation, with not a vote to spare in the Senate, where President Pro Tem Darrell Steinberg and other political leaders had to twist arms to get it done.

Mayor Ed Lee praised state leaders for moving the project forward and said, “This project means more than just celebrating a great transit system, which high-speed rail is,” noting that the overall Transbay Terminal project will also include about 40,000 new residential units being built on a dozen surrounding buildings, including what will be the tallest on the West Coast.

But that project has its critics, including Quentin Kopp, the retired judge and former legislator who sponsored the bill that created the California High-Speed Rail Project and was the first chair of the California High-Speed Rail Authority. He has derided Transbay Terminal as simply a “real estate deal,” noting that the tunnel from there to the Caltrain station is too expensive, still unfunded, and shouldn’t be built.

Asked about that $1 billion-plus funding shortfall, Brown replied, “Let’s see the first phase, then the second phase, then we’ll figure out how to get it here.” He criticized the “NIMBYs and fearful men” and emphasized the long view of the project: “I signed my first high-speed rail bill 30 years ago. It’s taken some time to get this going.”

Several speakers cast the project as an obligation to future generations. Deputy US Secretary of Transportation John D. Porcari said most of the country’s most important infrastructure we enjoy today was built by past generations, and he asked, “Are we doing right by the next generation? Are we paying it forward?”