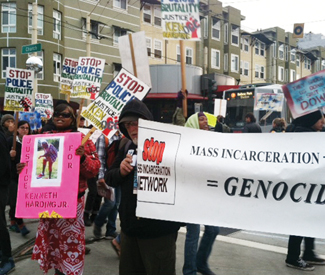 On July 16, 2011, Kenneth Harding Jr. lay bleeding on the ground. He was surrounded by San Francisco Police officers, who were in turn surrounded by neighbors and community members. The minutes ticked by and no ambulance arrived. After 28 minutes, Harding was dead at 19. The official story: after being stopped in a Muni fare check, Harding ran from police, drew a gun, and shot himself.

A year later, family members and community supporters maintain that the official story is a lie. A protest on his death’s anniversary this week shut down Muni service for an hour in his honor.

But protesters weren’t speaking of just Harding. Since he was killed by law enforcement officers, so were Charles Hill, Alan Blueford, and Derrick Gaines. All have led to varying degrees of protest that feed tensions between the cops and segments of the community.

Hill’s fatal shooting by a BART cop in San Francisco sparked last summer’s OpBART demonstrations, the energy from which flowed into early manifestations of the Bay Area’s Occupy movement, which was also marked by tense standoffs with cops that were followed by “fuck the police” marches throughout the Bay Area.

Despite such lingering tensions, Mayor Ed Lee recently suggested curbing gun violence by giving cops stop-and-frisk authority, a controversial idea that has been the subject of massive protest movements in New York City where what critics say is widespread racial profiling heightens tensions between police and communities of color.

Lee’s idea was widely criticized, triggering the Board of Supervisors to pass a resolution on July 10 criticizing the idea, urging Lee to abandon it, and saying it would destroy trust between the community and police.

There has always been tension in San Francisco between police and segments of the community, but a series of emotional, high-profile episodes and unsatisfying official responses over the last year has frayed that relationship even more than normal.

When Harding was killed, his mother Denika Chatman moved from Seattle to San Francisco. She wanted to convict the officers she believes murdered him. But the SFPD announced within weeks of the shooting that Harding had shot himself.

Now, Chatman and attorney John Burris have filed a federal lawsuit. “I know that it was murder,” she said. “I know his human rights had been violated.”

Chatman and other family members and friends maintain that when Harding was stopped while off-boarding the T train by SFPD officers and asked for proof of paying the $2 fair, he was unarmed. Harding ran, and those officers drew guns and shot him.

Police say that Harding had pulled out a gun as he ran and shot at police, prompting their return fire. They didn’t recover a gun at the scene, but after a weeklong “community effort,” police say a neighbor turned in a gun found at the scene.

A widely circulated video show’s Harding on the ground, bleeding to death, as police stand around him.

But as SFPD spokesperson Carlos Manfredi tells it, “The officers did not just stand around. Officers had just been involved in a violent confrontation, they were fearful for their lives…A hostile crowd began surrounding the officers.”

“It wasn’t until more officers arrived on scene to assist the primary officers and prevent them from being surrounded by a hostile crowd that could have potentially escalated the situation. Not to mention, the ambulance would not be able to enter a violent scene that could potentially put their lives at risk, until we feel it is safe,” he said. “Remember, the officers did not know if Harding was laying under the gun. Approaching an armed gunmen who was shooting at officers is extremely dangerous and life-threatening.”

But many say the police shouldn’t be afraid of the community it patrols. When Chatman moved to the Bay Area, she says, she found a community in Bayview-Hunters Point. She also found support in a movement against police violence, made up largely of grieving mothers.

When hundreds marched in San Francisco demanding that George Zimmerman be charged with murdering Trayvon Martin in Florida, Chatman joined other African American mothers in condemning police killings of their sons. Since Martin’s death, similar deaths have continued in the Bay Area.

Alan Blueford, 18, was killed May 6 in Oakland three weeks before he graduated high school. Derrrick Gaines was 15 when he was fatally shot June 5 in South San Francisco. Each case feeds anew the fears and resentments some communities feel toward the police.

Some Occupy reactions continued a tradition of a certain type of radical response to police: just get them out. For many, police are like foreign occupying forces in neighborhoods, afraid of locals they don’t understand and willing to shoot to kill in mildly threatening situations. Harding and Gaines were running away when they were shot; Blueford was allegedly wielding a screwdriver. In all these situations, shooting to wound likely would have sufficed for self-defense.

When asked how she would like to see police interact differently with Bayview-Hunters Point residents, Chatman didn’t see much potential. “Not at this point,” Chatman said. “There’s been too many murders. Things would have to change drastically. And the mayor trying to implement a stop and frisk? Kenny is a worst example of stop and frisk and racial profiling.”

Indeed, at the end of a tense year, Mayor Lee’s idea of adopting the stop-and-frisk tactics used in New York and Philadelphia has been met with intense dissent. Sup. Malia Cohen — whose District 10 includes Bayview-Hunters Point — and former Mayor Willie Brown, two of the mayor’s supporters, immediately came out against the idea.

Even the SFPD is wary of the idea.

“We are not passing stop and frisk,” Manfredi told the Guardian. “It’s not even an option on the table for the department. We’re using the same method we’ve been using this whole time: probable cause and reasonable suspicion.”

The anniversary of Harding’s death comes a week after the Malcolm X Grassroots Movement released a highly circulated report that concluded an African American is killed by a police officer or someone “deputized to act in their name” every 40 hours.

“We call [the killings] ‘extrajudicial’,” the report notes, “because they happen without trial or any due process, against all international law and human rights conventions.” The report notes that only nine people have been charged in the 110 killings it looks at, and none convicted.

But community perceptions and unease can linger for a long time when incidents don’t seem properly investigated or atoned for.

“It’s very alarming. Especially the rate that it’s happening at. And anybody is paying attention, they’re starting use all the same stories for all these young black teenage males that they’re murdering,” Chatman said.

Alan Blueford, 18, was killed by Oakland Police on May 6. He was confronted by police on suspicion of hiding a gun and ran away. Police first said he had drawn a gun and shot an officer as he ran; an investigation later revealed that the officer who was injured shot himself in the foot. There has been no evidence uncovered that Blueford had a gun.

A month later, Derrick Gaines, 15, was confronted by South San Francisco police, again for looking suspicious. Police say he ran away and drew a gun, and that they needed to fire in self-defense. At a community speak-out July 13, Gaines’ mother, Rachel Guido Red, said she had just received the coroner’s report. It’s conclusion? “Derrick was shot in the back.”

She related what she believes happened: “He was running. He was scared. He was tripped by the officer, and he didn’t have a chance to pick himself up because this man played judge, jury, and executioner.”

Over and over, police investigations clear the cops of wrongdoing, as an investigation of Hill’s shooting on a San Francisco BART platform recently did. Chatman said lawsuits like the one she filed are often the only way to seek justice.

Chatman wants to see shoot-to-kill policies changed. “I would like to see a bill passed making these people responsible for murder,” she said. “And then maybe they’ll start going back to original ways, of maybe wounding somebody, firing a warning shot, or doing something to injure the person, instead of shooting to kill. Because now they all come with their guns drawn. How come every police man there has to shoot? Why do they all have to shoot? Why can’t one officer shoot, and just shoot to wound?”

Manfredi said the policy isn’t shoot-to-kill, but it isn’t shoot-to-wound either. Instead, it’s to aim for “center mass” (the torso area) and shoot until there is no longer a threat. “We never, ever had a shoot to kill policy,” he said. “We shoot to stop the threat. And once we assess the threat and realize there’s no longer a threat, then we stop.”

Sharen Hewitt, founder of the Community Leadership Academy and Emergency Response Project (CLAER) is also indignant about Harding’s murder. “I don’t think that I should pay for Kenneth Harding to be shot down in my streets because he didn’t have two dollars,” she said.

In her decade of work with CLAER, Hewitt has overseen many projects that improved conditions for families whose children were killed by police, from funding funerals for families who can’t pay to bury their dead to counseling for family members other than biological parents of murdered kids. CLAER also sends emergency responders to sites of murders.

“We thought it was important to deal with the immediacy of the homicide and provide support so we could mitigate the possibility of retaliation,” Hewitt said.

Hewitt also has ideas for how to increase trust in police. “They need to understand the nuances, so they see Johnny with the hoodie on and know, he’s a star quarterback. I’d like to see my cops, paid by my tax dollars, not going to Sonoma County to spend them. One day the officer might be out running and he’ll have a hood on, and he’ll understand the nuances of what people are going through,” Hewitt said. She also advocates for housing set-aside for police in every neighborhood, insuring that officers live in neighborhoods they patrol.

We asked Manfredi about this idea. “I’m a big proponent of having officers live in the community where they work, because then they can engage with the community,” he agreed. But, he said, “one of the major issues about San Francisco, the cost of living is extremely high. To buy a home out here, we’re talking in the millions of dollars. That’s just too expensive.”

He said that to make the idea work, the city would need to “implement some type of program or plan where they offer discounts for public officials so they can afford to live in the city.” He explained that even in less expensive areas like Bayview and Sunnydale, the cost of housing would be too high for police officers to raise a family.

The current entry-level salary for SFPD officers is $88,842 to $112,164. By comparison, the median household income in San Francisco is about $71,000. According to city-data.com, the median household income in Bayview is $47,147. In Sunnydale, Hewitt’s neighborhood, that figure is $33,641. “I would say, the police are part of the community,” Hewitt said. “And they must be held to community standards. What I’d like to do is make it part of common thought that they are perceived as community members.” She said the African American community has differing ideas on how to address police-related problem, but the tension is widely felt. “It’s not like the black community is monolithic,” she said, “although we are bearing the collective brunt.”