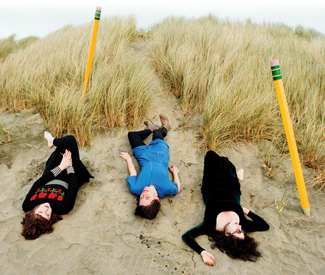 MUSIC Grass Widow nicknamed the city it calls home “Planet San Francisco.” As in, the city is removed from elsewhere, it has its own humming, insular ecosystem. An inhabitable planet all its own that happens to be attached to the rest of the state and country.

The post-punk trio — bassist Hannah Lew, guitarist Raven Mahon, and drummer Lillian Maring — with lush harmonies and no frontperson used both this foggy city of ours and the unknown planets in the sky above as fodder for the electrifying new full-length, Internal Logic.

The album, which gets a proper release party this week at the Rickshaw Stop, was written and recorded in brief spurts over the course of a year, while Lew worked at Lost Weekend video store in the Mission, woodworker Mahon built things in Mendocino County, and Maring served up lattes in an Oakland cafe while writing about fairies for local blog FairyRoom.

Internal Logic is a title derived from the band’s own internal musical logic along with a phrase written by Tobi Vail after Grass Widow’s 2010 record, the bleak and beautiful Past Time, which was released on Kill Rock Stars. In the review, Vail writes, “Grass Widow are like The Raincoats or The Minutemen or even The Melvins in method, meaning they create their own formalistic, aesthetic universe with its own internal logic.” It stuck.

And this time, the trio is did it without a label — releasing Internal Logic on their own newly formed HLR Records. “It’s really just an extension of what we’ve been doing, we’ve always been really hands-on with all our business,” says Lew during her lunch break. “Also, we were just really proud of the record, almost proud enough that we were like, ‘we can’t share this glory with anybody.'” She laughs, recognizing this as a bold statement.

However audacious, it makes sense. The record is complex, angular, melodic, supernatural; both based in pop and roaring with the underpinned ethos of punk. It rears its head from moody rocker “Disappearing Industries” to tranquil, wordless shepherd “A Light in the Static.”

Those delicious harmonies swell on SF-meets-outer space track “Spock on Muni,” and again on single “Goldliocks Zone.” Like many of the songs on Internal Logic, “Goldilocks Zone” is about the possibility of life on other planets, along with hopeful personal mythologies and sci-fi parables. Lew discovered the zone that became the inspiration for the song through basic keystrokes.

“Sometimes when I’m feeling down I’ll go online and check what NASA’s doing. I follow them on Twitter. It just, for some reason, makes me feel hopeful when there are things out there that people are doing that make me feel like an ant.”

She learned that afternoon about the Goldilocks Zone, essentially, a habitable zone. Like the fairytale, the environment in said zone is just right to host life.

She says the words to that track have been the most jumbled by the press. “We’re saying ‘just right,’ but people think we’re saying ‘just drive!’ or something really aggressive. There are so few words, it’s just: stood/looking at the sky/I wanted to find your whole life/I don’t know you/just right,” she says. “It’s just about that moment of wonderment — looking up at the sky and not knowing what’s out there, but knowing there’s a huge possibility that there is something, there’s a zone that is inhabitable for life.”

While the hopeful cosmic pining is most prominent on the record, one track is about something else entirely, something I even hesitate to bring up, though it’s indeed a part of the puzzle. “Advice” is both about the weird dynamics of the industry, and the absolutely unwarranted advice so often thrust upon women by male sound guys, guitar techs, Guitar Center employees. “On a night when a douchey sound guy is starting to ruin our mood for a show, we have that song and we just sing it, and it’s like a nod to each other.”

Which brings us to another unfortunate side effect — the bullshit, rape-referencing frat boy review of the new album that focused solely on gender. “It was shocking that they published that, but then again, it wasn’t, because in a lot of ways I think [that publication] is an icon for the apathetic years we’re in right now, shock value, this post-PC kind of thing where they’re playing on the idea that people are going to read what they write and be self-conscious about giving a shit about anything.”

Grass Widow, however, does give a shit about something — about making something memorable, about the band as a family, about creating an alternate universe with music.

The mostly celebratory — and celebrated — Internal Logic was released the same day the band began a summer tour in early June. “It was pretty affirming,” Lew says of the tour. “We even had a couple groups of girls be like, ‘we started a band because of you.’ I’m dying to hear those bands.” *