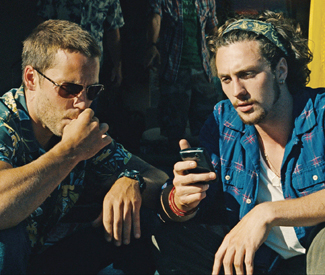 HERBWISE First things first, because I just saw the new Oliver Stone weed movie and I’m dying to tell you which of the grisly marijuana murders was my favorite. But there are bigger things afoot, namely the President’s journey to the East Bay on Mon/23.

Is there anyone in the Bay who has more to protest, in regards to medical marijuana, than the staff and students — not to mention the patients who depend on their harvest — of Oaksterdam University? Earlier this year the place was ransacked by the feds, who left nothing “short of the tables and chairs and teachers,” new school president Dale Sky Jones told me in an interview in June (Herbwise “After the raid” 6/20/12).

And so, the school may be hosting a welcome wagon for the President’s fundraising foray to Oakland on Monday. Details weren’t quite hammered out by the time we went to press, so stay on top of developments if you’d like to add your voice to those that are calling for President Obama to reign in/call off/fire the overzealous lawmakers who are trampling state law by persecuting our cannabis businesses.

… to the city of San Francisco for doing what it can to support cannabis, says David Goldman of Americans for Safe Access. Goldman got me on the horn last week to talk about ways you can support the dispensaries that are still with us — not to mention the new ones that have recently opened their doors. Here’s a few ways to engage in cannabis culture in the city.

Americans for Safe Access San Francisco chapter meeting 847 Howard, SF. First and third Tuesdays, 7:30pm, free. www.safeaccessnow.org. Past chapter meetings have included trainings on what to do if you get caught in a dispensary raid as a patient — but ASA meetings are also a good chance to meet other cannabis activists, find out about upcoming events, and drink free coffee.

ANOTHER ONE BITES THE DANK

HopeNet (223 Ninth, SF. (415) 863-4399, www.hopenetcompassion.org) joins Vapor Room in closing after a final day of operation on July 31. Another threatening letter from US Attorney Melinda Haag was the culprit, leaving us with one less way to fill cannabis physician’s recommendations.

How apt a description of the marijuana industry is Oliver Stone’s new movie Savages? For all the buzz surrounding the release — and Stone’s corresponding mugshot, interview, and incendiary jabs at the prison-industrial complex featured on the cover of High Times — the frenetic, hyper-violent film still seemed to me as though someone took a cocaine movie and slapped a bunch of glamour shots of nug jars on top of it. Perhaps Stone learned from the lackluster numbers of his recent releases that explored Wall Street, South American democracy, and George W. Bush, that you need a few good head explosions and cannabis-fueled three-way to ring up Hollywood-level revenue.

There is some subtle cannabis messaging buried in there, like joint-smoking shots that cut to John Travolta’s federal agent dragging on his cigarette. And yes, the futility of the War on Drugs is a theme, again subtly. But the way in which the economics of the drug trade is dealt with is pretty standard, as are the way faceless drug peons are shot down in the name of saving Blake Lively’s kidnapped hippie goddess. (Who is addicted to marijuana!)

Ah yes, the hippie goddess. Since I’ve been on somewhat of a feminist tear recently, I’ll close with a word on the female characters in Savages. There are three, maybe three and a half, all plucked straight from the Hollywood firmament. Two (Lively and Sandra Echeverría as a Mexican cartel princess) are young, impossibly lovely women who are kidnapped and forced into bondage for most of their screen time. Another is an impossibly lovely Latina cartel matriarch (Salma Hayek), who rips off her wig when said daughter is taken and wears lace-and-spandex numbers while conducting business in her home office. The last female character, who barely counts as such, is a sultry, mysterious drug peon whose most momentous role is helping Benicio Del Toro rape Lively.

Shout-out to all the women who can make the protest on Monday!