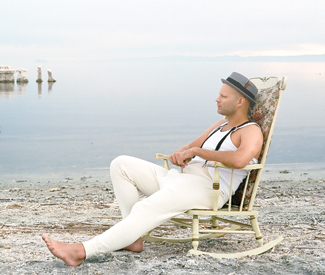 MUSIC The sad truth of dance music is that the party necessarily ends. Tailor a song too much for the floor tonight and it’s lifeless on the street or in the car tomorrow. Factor in the conflation between EDM and electronic music, and the latter can be all too often stuck in the shadow of the club. With his latest solo album, Salton Sea, Danish music producer Tomas Barfod steps out into new territory.

Barfod — a.k.a. Tomboy, also the drummer for electro-rock act WhoMadeWho — has worked on more projects than I could count: producing, running a label, booking Copenhagen’s Distortion festival, and lots of DJing. But tired of nonstop club performances, he recently decided to refocus and moved to LA “It was about getting away from doing gigs and focusing on studio work, that was the main goal of going away,” Barfod said. “But also to start from zero in a totally different — and awesome — environment.”

This environment allowed Barfod to work with Leeor Brown’s burgeoning label Friends of Friends, home of talented producers including Shlohmo, Salva, and Groundislava. “I’ve always had a vision about where I wanted my career to go, and almost always ended there, but never on the path that I expected,” Barfod says. Working with FoF has been an unexpected path. “It started when MySpace was almost dead. I hardly ever checked my messages, but I got one from Leeor. It took us a couple of years to really figure out how to work together, but when I moved to LA there was no question that we should do an album.”

The result is Salton Sea, named after the California lake area that’s now largely an abandoned wasteland. (Imagine the post-apocalyptic setting for a Fallout video game or Mad Max movie.) In the early 1900s, an engineering accident flooded the area and created a lake that was for a few decades rebranded as a utopian resort town.

One track on the album recalls this, consisting of a single repeated lyric: “everybody came to party.” An ecstatic house track? A hedonistic rager anthem? Barfod affects another mood entirely. The voice is robotic, with zero emotion, over a brooding four to the floor bass beat. The lyric is a statement that begs a question: and then what happened?

Saline levels rose. Water became polluted. Fish became infected with botulism and washed up on the beach. In the case of the Salton Sea, the past returned, the party was over, the people left.

Barfod describes himself as a “retro-romantic” for “places where nothing has been touched for ages. It doesn’t need to be pretty, as long as it tells a story about the past.” He was working on music and collecting pictures of abandoned places and things — ships being cut up in India at Alang Beach; empty offices in Detroit — so when Leeor told him about the Salton Sea it was a natural fit. “It’s a really special place,” Barfod says, “the lake is kind of timeless.”

Similarly timeless is Blade Runner, Ridley Scott’s sci-fi classic set against an environmental dystopia. Not wanting to be too influenced by new music, Barfod cites the film, particularly Vangelis’s soundtrack, as something he listened to a lot while making Salton Sea. Its stamp is there, beginning with the racing arpeggio and slow synth chord progressions that open the album on “D.S.O.Y.”

But the influence is beyond references. A video posted by Barfod shows visual designer Syd Mead discussing minute details like parking meters as he creates the futuristic world of Blade Runner. Key to the aesthetic is building on existing layers so that buildings use ceiling fans in an era of flying cars, and a geneticist can create artificial humans but wears coke bottle glasses. It’s a regressive sort of futurism, but ages surprisingly well.

Listening to Barfod there’s a sense of wanting to make something that sounds good now, but will last. “I think it’s very hard to make something timeless. However my way of trying is that I tend to use analog sounds in my drums and synths, and acoustic instruments so it sounds somewhat retro, but on the other hand I use a lot of computer generated effects that are new and almost futuristic. I don’t know if it makes my music timeless but I like it like that.”

The lesson of the Salton Sea is that the future can’t escape the past. The lesson of Blade Runner is that the future can’t escape the past. Tomas Barfod is in a new home, with new collaborators, and a new label, but at the same time it’s not a complete break. (Among the new voices on Salton Sea is his WhoMadeWho bandmate, Jeppe Kjellberg. When we exchanged emails Barfod was back in Europe for gigs.) While he’s moving into the future, Barfod has his eyes and ears on the past.