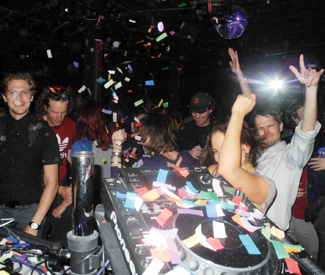 MUSIC What’s your idea of a productive lunch break? Mine involves returning a failed online shopping purchase to FedEx with just enough time to grab a sandwich to shove into my face back at my desk.

DJ Matt Haze, of the Slayers Club collective, hates this. “A lot of my friends work in the tech industry or in finance,” he explains. “Even though they’re eating a nice gourmet lunch, they’re eating it at their desks. They’re not taking a moment to breathe or take their eyes off the monitor… I want to provide an outlet for people during the day.”

That outlet is RECESS, a new monthly (for now) midday party Haze is organizing with Sunset Promotions. The goal: to get as many young, San Francisco office workers to take full advantage of that magical allotted free hour during their day by getting sweaty with like-minded PYTs on the dance floor.

The daytime lunch party idea isn’t entirely new. The Swedes have been doing it with wild success since 2010, under the name Lunch Beat, but Matt is quick to point out that his idea for RECESS came independently. He first shared the idea of a lunchtime party with friend and Scoutmob Community Manager Lauryn McCarthy.

She was the one who told him about the Lunch Beat phenomenon, which he credits for motivating him to make RECESS a reality. “I was spurred into action,” he says, “knowing that someone else had a similar idea and was making it work in Europe. I thought if any city in the US should have a lunchtime dance party, surely it’s San Francisco.”

Surely indeed. Last week, my coworker and I headed to the RECESS launch party (NOTE: future installments will be dubbed bEATs for Lunch out of respect to an already-existing Oakland Recess party that was just brought to the organizers’ attention).

That kickoff event was held at Monarch, a club at the lively intersection of Sixth and Mission Streets.

We passed a small crowd standing on the side of the Monarch building, eating sandwiches in the sunshine (RECESS provided free, vegetarian sandwiches from Ike’s to the crowd, but we were too late to snag a bite — alas, they looked pretty good).

With our IDs checked, we headed into the small bar and lounge area. Less than 10 people were scattered around the bar and a few couches, chatting and eating. House music bumped from the basement. I wondered if the dance floor was experiencing the same sparse attendance.

We ventured toward the music, passing two sweaty girls who were laughing and fanning their faces on their way up. I was shocked when we hit the basement.

Here was the party. Not the daytime awkward-fest I’d been imaging. It was a party-party with club lighting and projectors splashing trippy footage of abstract art and bare boobs and squiggly lines across the walls. Haze was dancing behind his turntables, spinning an electrifying set of house music mixed with the likes of Depeche Mode and eclectic world music.

And because everyone was coming from work, they were dressed casually. No guys in shiny button-down shirts or girls with torture-devices strapped to their feet.

The vibe was fun, inclusive, and warm. Maybe because we were all doing something a bit out of the norm, everyone was smiling and jumping, laughing and making real eye contact with each other. It was a genuinely positive atmosphere without dreaded pretension.

My coworker and I stayed for 45 minutes. We pounded a drink at the bar — this is another way the SF event differs from the strictly non-alcohol-offering Lunch Beat — and danced with abandon. People began trickling out around 1:45pm.

Back at the office, I was noticeably less tense and in a fantastic mood. It’s hard to pinpoint why RECESS feels so exciting and illicit. Yes, you’re sneaking off to a club in the middle of the workday, but it’s your lunch break. No broken rules there. Still, there’s a rush that comes with using that time to do something just for you.

The next bEATs for Lunch (formerly RECESS) will take place Aug. 8 at Monarch.