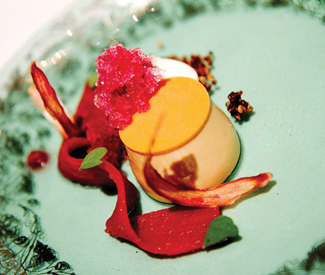 APPETITE A strong concentration of cutting-edge American chefs are right here in the Bay Area. Widely acknowledged in food publications and among global diners, Bay Area creativity has been ascendant in recent years. Collaborative dinners between local chefs and with chefs from countries beyond our borders uniquely showcase the forward-thinking cooking coming out of our region. I’ve been privileged to attend recent one-of-a-kind dinners (like the one this week between culinary “it” town Copenhagen chef Christian Puglisi of Michelin-starred Relae and Bar Tartine’s visionary chef Nick Balla).

During a weekend in May, one of Australia’s star chefs, Ben Shewry of Attica in Melbourne (www.attica.com.au), joined the incredible David Kinch at Michelin-starred Manresa in Los Gatos (www.manresarestaurant.com). Both chefs are known foragers, utilizing local bounty in their restaurants in bursts of pure inspiration — Manresa sources its produce from nearby Love Apple Farms (loveapplefarm.typepad.com), which holds classes on urban goat-raising, cidermaking, edible perennials, and more. The hours-long dinner was not just a visual feast of color combinations, it was a dream of freshness in unexpected forms, heartwarming in taste.

Shewry started with walnuts in their shells, unadorned and tender, while Kinch offered carrots, clams, and savory, textural granola dotting vegetable marrow bouillon. Shewry’s fresh crab and artichoke leaves arrived softly layered, dotted with citrus cream. Unlike any crab dish I’ve had before, it nearly dissolved on the tongue, a striking as the sea yet elegantly subtle. A stunner. As was his beauty of diced sweet potato, purslane, and egg doused in a creamy pool of Cabot clothbound Vermont cheddar. Kinch’s gorgeous dessert was a silken, custard-like mound of white chocolate surrounded by crispy quinoa, goat’s milk ice cream, and a strip of rhubarb resembling an elevated fruit roll-up.

Unpredictable touches jumped out, like Fox’s frozen “white snow” over corn pudding topped with grilled sweetbreads and tempura-fried okra (paired beautifully with a 2006 Pierre Morey Bourgogne Chardonnay), or another Fox hit: bone marrow puree animating hearts of palm, skinned red potato and poached ruby fish, happily paired with a cup of duck consommé tea. The meaty tea seamlessly interacted with the vegetables and bone marrow, highlighting a masculine mischievousness in Fox’s stylish cooking. Besides her truly imaginative take on tomatoes, my other favorite Crenn dish arrived dramatically on a scooped stone slab graced with a chocolate branch and an edible, glistening silk nest filled with dehydrated vanilla pods over sweet corn and porcini mushrooms. Like a treasure found in an enchanted forest, the dish explored both savory and sweet whimsically, a feminine wildness tempered by refinement.

We’ll see more from both skilled chefs — and many others — during SF Chefs days’ long extravaganza, which I look forward to every year in tented Union Square. It’s a pleasure to witness our region’s best collaborate with each other and the finest globally, a reminder as to how the Bay Area is in the midst of yet another culinary renaissance, one of many the past few decades.