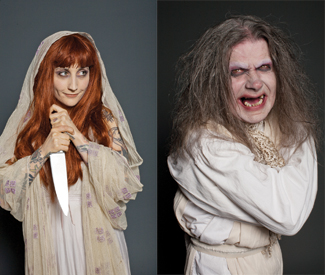 THEATER From Broadway blockbuster Les Misérables (at the Orpheum) to offbeat courtly lounge act Her Rebel Highness (at Harlot), 18th-century radical postures are enjoying an unexpected vogue at the moment — as anachronistic and bracing as a pinch of snuff. But let the truly adventurous eat Marat/Sade. In what may be the year’s most felicitous blend of company, producer, and material, Thrillpeddlers and Marc Huestis offer an exuberant, exquisitely trashy, and note-perfect revival of Peter Weiss’s radical 1963 play, permeating the enormous Brava Theatre with an infectious delirium perfectly in sync with restive times.

Helmed with operatic flourishes and insouciant humor by artistic director Russell Blackwood, Marat/Sade unfolds meticulously and vibrantly across an imposing pasteboard set (by James Blackwood) that aptly looks something like a sprawling lavatory with enormous glory holes, covered over in political graffiti (from “El pueblo unido jamás será vencido” to “Ayn Rand fucks you”). Whatever debt it owes to the original legendary production (staged by Peter Brook for the Royal Shakespeare Company, and made into a film in 1967), this Marat/Sade is fully inhabited by the raucous libertine spirit and Grand Guignol aesthetic of Blackwood’s adventurous company and its artistic confreres — including former Cockettes Scrumbly Koldewyn (the show’s astute musical director and pianist) and Rumi Missabu (who excels as the straightjacketed and wild-eyed Jacques Roux, radical upstart priest of the French Revolution).

The play’s full title — The Persecution and Assassination of Jean-Paul Marat as Performed by the Inmates of the Asylum of Charenton Under the Direction of the Marquis de Sade — pretty much says it all, plot-wise. The date is July 13, 1808, 15 years to the day after Girondist partisan Charlotte Corday stabbed Jacobin leader Marat to death as he soaked in his bath. The French Revolution, having since lost many more lives in a tidal wave of bloodshed, has succumbed to Napoleon and the return of the old guard, wrapping themselves in the mantle of 1789. A skeptical, revolution-weary but ever defiant Sade (rivetingly personified by a darkly charming Jeff Garrett) has been granted permission to perform his play in the institution’s bathhouse. There the asylum’s director, quintessential bourgeois twit Coulmier (a comically wound yet nicely restrained Brian Trybom), watches the performance with wife (Lisa Appleyard) and daughter (Carina Lastimosa Salazar), intervening now and then to protest feebly Sade’s reinsertion of some previously censored lines.

Sade (once a real-life inmate at Charenton) meanwhile leads his variously deranged cast in a reenactment of the death of the Jacobin leader. The “actors” (or “patients” to Director Coulmier and his regime of mental hygiene) are made up of political dissenters, social deviants, the desperately poor, the disempowered, the mentally ill — the lines blur pointedly here.

This play-within-the-play unfolds like a comically unhinged historical pageant, with bursts of anarchic energy, high political debate, and low provocation — all amid excellent renderings of composer Richard Peaslee’s wonderfully serrated songs (backed by Koldewyn, Victoria Fraser, Eden Neuendorf, and Birdie-Bob Watt on a mix of keyboard, percussion, brass and wind instruments). Marat (played with a biting intensity by a fine Aaron Malberg) argues with Sade while soaking continually in a bath to assuage the fever and itching from a debilitating skin disease, his wounds attended to by spouse Simonne Evrard (a sure Kära Emry).

Before he dies, Marat suffers three separate visits by Corday (played by a delicately incandescent Bonni Suval, as a narcoleptic and melancholic beauty with volcanic depths). But the real purpose of this thin plotline is the airing of competing viewpoints on the nature of revolution, freedom, power, individuality, social solidarity, authority, and (more implicitly) art’s role as a site of radical alternatives.

To this end, the large and able cast has its say in song and other outbursts, variously hysterical, macabre, louche, and chilling. But the preeminent voices are Sade, Marat, Corday, and Roux — all of whom attack, from competing angles, the problem of resistance in the modern age, where bureaucratic class-rule comes in the name of democracy, liberty, equality, fraternity, and other terms appropriated by the modern state.

Effortlessly recalling recent popular uprisings across a shuddering planet, these archetypal voices of dissent sound as alive as ever in Weiss’s eloquent dialogue — an iridescent mix of the philosophical, poetical, and scatological. As the cast belts out for a final time the show’s blunt refrain, “We want our revolution now!”, the actors spill over the stage and the inmates take over the asylum, enveloping the audience in a coup d’état that is simultaneously a coup de theatre, and a thoroughly carnivalesque upending of norms. It’s enough to make you lose your head.