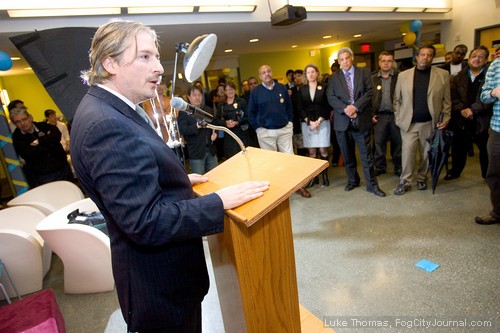 Matt Gonzalez – the attorney and former president of the Board of Supervisors whose 2003 run for mayor galvanized the city’s progressive movement – has withdrawn his endorsement of Sup. Christina Olague for his old District 5 supervisorial seat, citing her positions on the 8 Washington project and replacing ranked-choice (RCV) voting with a September mayoral primary election.

It is perhaps the biggest political blow that Olague has suffered since being appointed to her first elective office by Mayor Ed Lee in January, and a sign that she may be siding more solidly with Lee and his pro-development allies than with the progressive political community she has long identified with – and that could complicate her race in one of the city’s most progressive districts.

Gonzalez, who helped launch Olague’s political career by appointing her to the Planning Commission in 2004, confirmed his decision and the reasons for it, but he told the Guardian that he didn’t want to make a formal public statement yet. That could come later in the week, possibly coupled with a new endorsement in the race.

But he did say that he’s been frustrated with Olague’s actions on both 8 Washington – a housing project for the super-rich on the Embarcadero – and with her recent antics on RCV. In both cases, it wasn’t just the votes, but the way they were made that have raised doubts about Olague with Gonzalez and other progressives.

Olague and Sup. Jane Kim (another former Gonzalez protege who has disappointed many of her one-time progressive supporters on several high-profile issues) not only voted for the 8 Washington project, but also for a series of amendments that made the already lucrative project even more profitable for the developers and costly to the city.

On RCV, as I reported on Friday, Olague surprised progressives by giving new life to efforts by the most conservative supervisors to repeal the system, then has made a shifting series of statements and pledges on the issue, in the end supporting a system that will repeal RCV only for the mayor and create a September election.

The fear is that election would be extremely low turnout, and Lee could win it outright with at least 65 percent of the vote and avoid the normal November election, and Olague has been unwilling to fully explain her position or address concerns that she is simply doing Lee’s bidding. Olague hasn’t returned our calls on that issue or for her reaction to Gonzalez’s decision to withdraw his endorsement.