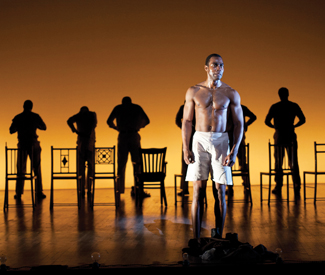 THEATER The set (by Beowulf Boritt) is almost unassuming in its simplicity: just a trio of receding frames arching over the stage, each progressively more askew, and beneath them a jumble of aluminum chairs piled to one side. Still, such simplicity also hints at, and soon delivers, rich complexity.

The chairs become many things over the course of the evening but first of all a bus stop, where an African American woman (C. Kelly Wright) in 1950s dress waits and remembers. This mute opening scene then gives way to a reverie and nightmare — a memory and history that take the form of a highly fraught “entertainment” — as a man in a white suit and a black string bow tie (Hal Linden), invariably recalling the Old South if only via the emblem of a certain fast-food chicken franchise, comes onto the stage and pronounces the start of the show.

That would be a minstrel show, a notorious artifact of 19th and 20th century American popular culture, which returns with subversive vengeance in The Scottsboro Boys — the iridescent 2010 Broadway musical by the famed song-making team of John Kander and the late Fred Ebb, in collaboration with equally-no-slouch associates David Thompson (book) and Susan Stroman (director and choreographer). Making an impressive Bay Area debut at American Conservatory Theater, The Scottsboro Boys revisits the trials and the international cause célèbre sparked by the false accusation of rape leveled by two white women at nine freight-train–hopping African American youths (all teenagers ranging in age from 13 to 19) in Depression-era Alabama.

At the same time, it’s precisely the mesh-clash of form and content —recalling similar canny deployments of popular theatrical forms Kander and Ebb’s Cabaret and Chicago — that makes Scottsboro a vigorous, if sometimes simplified excavation of the case, as well as this country’s ongoing convolutions over race, sex, ethnicity, and class. A productive tension arises between the show’s exquisite spectacle and the often uncomfortable, even macabre content of the storyline. In just one example, a winning tap number erupts in the young men’s shared jail cell, inspired by the terrifying proximity of the electric chair. So charged a number generates as much thought as emotion, as the audience shifts uneasily in a place where popular entertainment mingles pleasure and complicity, truth and artifice.

The subversive appropriation of minstrelsy is not unique to Scottsboro —there’s the San Francisco Mime Troupe’s 1965 production of Minstrel Show, Or Civil Rights in a Cracker Barrel, Suzan-Lori Parks’ use of minstrel tropes in Topdog/Underdog and The America Play, and Spike Lee’s 2000 film Bamboozled, for instance — but the musical deploys it with its own intent, humanizing the young men whose lives were permanently altered by their arrest and the subsequent trials, which became international news when the Communist-led International Labor Defense got involved, sending in celebrated New York attorney Samuel Liebowitz as the new defense counsel. That the trials were themselves the lesser evil in a white Southern regime of lynching and mob justice (waiting, essentially, just outside the walls of the jailhouse) is never lost on the audience either.

Thompson’s admirable book, meanwhile, in the figure of the woman at the bus stop (an unnamed Rosa Parks) bearing witness to the events of the past, draws a line from the Scottsboro case to the later Civil Rights Movement. But, ironically, the use of Rosa Parks obscures as much as it reveals if we think of her as a lone actor who sparks a revolt against an unjust system. She too was a member of a movement culture, one that had built on the activism of the 1930s that first brought the Scottsboro case to light. *