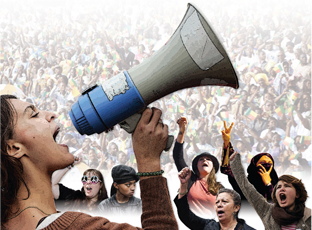 Is San Francisco still on the cutting edge of women’s issues? I recently spent a sunny Saturday morning buried in the radical archives of Bolerium Books (www.bolerium.com) — which is by the way, an amazing resource for anyone researching labor, African American, First Peoples, and queer history, among other things. Me, I was looking into our city’s rich history of feminist activism, inspiration for our upcoming Guardian “Bay Area Feminism Today” panel discussion. The event will unite amazing females from across the city who have but one thing in common: they’re pushing the envelope when it comes to the definition of what a “women’s issue” is, in a time when very few people claim feminism as their primary crusade. We’ll be talking more about their exciting projects –- but also touching on more universal issues. What is San Francisco’s role in fighting the nationwide attack on reproductive rights? How is our progressive community doing in terms of supporting women and maintaining a feminist perspective on issues?

Women’s work: it’s alive and kicking, and it deserves its moment in the spotlight. Meet our panelists here, in preparation for the real deal.

For me, sex worker rights are a feminist issue because they are about body autonomy. As much as reproductive choice is a feminist issue, so too is the right to determine the ways in which we use our bodies, change our bodies, and take care of our bodies. When people are criminalized for their HIV status, denied access to hormones and safe gender transitions, or are afraid to carry condoms because it might lead to police harassment or arrest — these are all feminist issues. At St. James Infirmary (www.stjamesinfirmary.org), we provide healthcare and social services from a peer-based model, so community is really the central aspect of the project. I was excited to chair the Harvey Milk LGBT Democratic Club (www.milkclub.org) last year, because I wanted to keep raising sex workers rights issues as part of the LGBT agenda. At St. James, nearly 70 percent of our community members are LGBTQ, so it’s really critical that sex workers rights are treated as a queer issue, a feminist issue, and a labor issue.

Artist and founder of Queer Rebels

My partner KB Boyce and I started our production company Queer Rebels (www.queerrebels.com) to honor the feminist and queer of color artists and elders who paved the way. Our main project is “Queer Rebels of the Harlem Renaissance,” a performance extravaganza which took place June 28-30. Such an exciting time! The Harlem Renaissance legacy remains with us to this day. It was an explosion of art, intellect, and sexual liberation led by queer Black artists. I’m also a board member at Community United Against Violence (www.cuav.org). CUAV was formed in the wake of Harvey Milk’s assassination and the White Night riots, and does incredible work to address violence within and against the LGBTQ community. Another way I’m involved with women’s issues is through Femme Conference (www.femme2012.com). In a culture where femininity is both de-valued and the expected norm, Femme Con creates a vital feminist space — this year it takes place in Baltimore, Maryland.

DJ and promoter of queer nightlife

I work in nightlife to provide space for communities that often don’t have spaces to come together. For 15 years, I have been providing music for women as the resident DJ at Mango (every fourth Sunday at El Rio, www.elriosf.com). I also work to support my fellow LGBT veterans by promoting their visibility through my nightlife projects. Ex-Filipino Marine and two-spirit drag king Morningstar Vancil’s story has inspired me to work on creating a space that raises awareness about LGBT veterans, especially women living with disabilities. I also think it’s important to do outreach in the Black LGBT community to help strengthen support for organizations such as the Bayard Rustin LGBT Coalition (www.bayardrustincoalition.com), a group that is not only fighting for Black LGBT equality, but is focused on social change for all oppressed people. After 10 years of executive producing the Women’s Stage at SF Pride, I was honored as a grand marshal this year at an event hosted by the BRC and Soul of Pride. It was beautiful to see so many Black LGBT people dedicated to moving global equality forward. Although there is a need to reach out to everyone in the Black LGBT community, naturally my goal is to first focus on connecting more women, a group that has always been less visible.

My organization Mujeres Unidas y Activas (www.mujeresunidas.net) is based on a double mission: personal transformation and community power for social justice. MUA is a place where women arrive through different challenges in their lives. We try to provide emotional support and references so that they don’t feel like they’re alone, so that they have strength to begin the process of healing and making changes. Those can include issues of domestic violence, problems with teenage children, labor or housing issues — when they arrive at MUA they begin the process of developing their self esteem and becoming stronger. They also begin to participate in trainings and making changes in their community and to the system through civic and political participation. At MUA, women find a home. They feel comfortable because they’re always welcome. We’re developing strong leadership, leadership that is at the table when it comes to making decisions about our campaigns, like our letter of labor rights and the help we give to victims of domestic violence through our crisis line. Every day our members are developing their ability to be involved in the organization and community, and making changes in their personal and familial lives.

As an elected member of the SF DCCC (www.sfdemocrats.org), the governing body of the SF Democratic Party, I am working to involve the party in recruiting more women to run for political office locally. In the June 2012 election, I assembled a slate of the female candidates for DCCC — we called ourselves “Elect Women 2012.” It was a controversial effort, because it included both progressives and moderates. In the wake of a highly contentious and factional term on the DCCC, we hoped to prove that moderates and progressives can work together to re-energize Democrats in this important presidential election cycle. Running for office in San Francisco is a high stakes game; it is costly and requires an extensive political network. And so the DCCC is where many future candidates get their start — it is where they build the connections necessary to run for higher office, and where they hone their fundraising abilities. By recruiting and supporting women candidates for the DCCC, I am hoping to build a “farm team” of female candidates within the party. This year, I am proud that the seven women incumbents on the DCCC retained our seats in the June election, and that we achieved parity by electing four new women to the party’s governing board. I look forward to seeing what these women can accomplish together.

Ending the failed war on drugs is a women’s issue because women are far too often bearing the brunt of that failure, losing their freedom, children, economic independence, safety, health, and sometimes their lives as victims of the war on drugs. Women in prison in California can be shackled during childbirth, lose custody of their children because they use legal medical marijuana. They’re vulnerable to HIV and hepatitis C because they or their partners don’t have access to sterile syringes for injecting drugs. My major project for the Drug Policy Alliance (www.drugpolicy.org) is mobilizing San Francisco to show the rest of the world how effective progressive drug policy can be. I want to see San Francisco open the first supervised injection facility in the United States, to end new HIV and hepatitis C infections among people who use drugs. I want us to truly have effective, culturally appropriate substance use treatment for everyone who requests it. I want San Francisco to end the cycle of undercover drug buys-incarceration-recidivism. I want us to address the appalling racial disparities in who gets arrested, convicted, and incarcerated for drug offenses here. I want us to aggressively defend our ground-breaking, well-regulated medical cannabis dispensary system against all federal intervention. San Francisco is leading the way in the United States in addressing the harms of drug use and drug prohibition but we have a lot more we can do.

I’ve worked for a plethora of LGBTQ organizations and have been on several national speaking tours. I currently serve as media and public relations officer of the San Francisco Youth Commission, and use my position to promote LGBTQ safety and overall health. I’ve partnered with several city departments in order to create a cultural competency video that will train all service providers on best practices for working with LGBTQ youth. As a vocal advocate against hate crimes and sexual assaults, I’m working with local groups to create a community patrol in the Mission to prevent violence against women and transgender people. I’m also the founder of Fundraising Everywhere for All Transitions: a Health Empowerment Revolution! (FEATHER), a collective aimed at making gender-affirming transitions more affordable for low income transgender people. I work to create avenues of equality for those who benefit the least from patriarchy by creating a culture of safety and support for people of all genders.