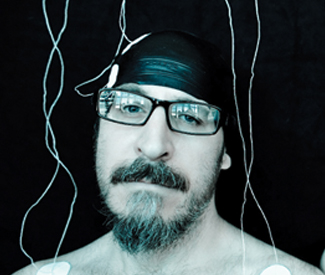 “You wanna see a show?” asks Jelliffe, looking a little like a Hassid at the public pool. It’s a physical fact that passersby can’t always pass by fast enough to escape the sideshow gravity of a woman in a beard, and sure enough one or two wanderers fall in with the rest of the crowd arriving already determined to see Space//Space, the much anticipated new show from the bicoastal company that most recently brought Bay Area audiences (with co-producers the Shotgun Players) Beardo and Beowulf: A Thousand Years of Baggage.

The audience comes through the front door and slips passed a silvery space ship set snuggly inside the painted brick garage, a combination that carries the vague threat of an aluminum container shoved in the microwave, only you’re inside with it. Some airy, oxygenated house music thrumming the room like a zither adds nicely to this anticipatory pre-show mood. Soon the lights go down leaving only a clip lamp on a sidewall illuminating the figure of some rambling madman-scientist-grease monkey (Peter Blomquist) who introduces a half-comprehensible “experiment.”

And with that, the stunning space pod — a self-contained octagon with milky translucent glass walls, an old-school turntable for a control console, and a series of small bare speakers clinging magnetically to its aluminum framework — comes to life, rumbling and flickering like a miniature nightclub, a plush DJ booth, or an industrial-sized hi-fi egg chair. Its passengers, wearing furry suits with ear hoodies, are the bearded pair of brothers seen outside a few minutes earlier. Penryn (Jelliffee) is waking up confused from a deep sleep. Lumus (Craig) cautiously explains to his addled brother that he’s been asleep for the better part of three years. In that time their mission has been going forward: they’re still bound for some unknown destination as representatives of earth civilization, a madcap message in a half-corked bottle recording their words and deeds for some future audience.

But like a latter-day Gregor Samsa, Penryn has awakened to find himself metamorphosed, still hairy as a Harry but sporting the “girl bits” of a Henrietta. This change will propel the mission in an unanticipated direction. Penryn reborn is full of questions and challenges for his/her brother and their gender blender of a mission inside this increasingly stuffy intergalactic studio apartment.

Meanwhile, it seems Lumus, when not studying his brother’s transmogrifying bod, has spent the last few years working out a comedy routine, bits of which wend their way through the narrative as an alternately hilarious and eerie metanarrative of sorts, inviting a Henny Youngman–grade hermeneutics of the patriarchal social construct left back on earth. “I’m dying up here,” Lumus likes to say in an increasingly ominous showbiz metaphor, hitting a button for canned laughter as his inept struggle with off-color bar jokes and Rat Pack–era machismo gives way to a darker prophesy of his own demise.

Too much more plot will spoil the surprises in store for venturers to Brooklyn or those awaiting the production’s hoped-for (but not yet scheduled) future landing in the Bay Area. But let’s just say this oeuvre Lumus is making — a summation of a life, the echo of a civilization now reduced to two — is up for grabs, and Penryn may be the person to grab it. The outcome of their space//space odyssey contains the seed of a new world and an old one, both slouching toward Alpha Centauri to be born.

Composer and BB&B regular Dave Malloy’s wonderfully vital music-sound scape brings a deep, dark, low creep under this or that moment, as the exquisitely Dada-esque space program and its thornier implications come to light in playwright Craig’s inimitably arch dialogue, and Craig and Jelliffe’s masterfully subtle performances. Directed with cool precision by Mallory Catlett, Space//Space features another incredible BB&B low-or-no–budget set (conceived by Craig and Jelliffe with choice video, lighting, and sound designs by Zbigniew Bzymek, Miranda k Hardy, and Brandon Wolcott, respectively). While less epic than recent shows past, this cosmic two-hander is also more romantic, thematically complex and moodily resonant in its half-haunted, half-blissful reflection on the intimate universe between one human being and another.