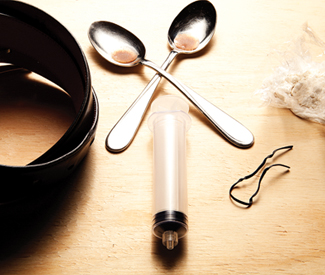 At needle exchange sites around San Francisco, fliers are handed out to intravenous drug users warning them about a new and very potent form of heroin thought to be responsible for a dramatic increase in recent overdoses.

“Gunpowder heroin,” as it’s often called on the street, began infiltrating the city’s illegal drug market back around February, according to widespread reports from various needle exchange participants. Yet public officials appear to be in the dark about the epidemic, partly because budget cuts have created long backlogs for toxicology tests and partly due to indifference about the safety of drug users.

The reports were gathered by the Drug Overdose Prevention and Education Project from their network of needle exchange programs and analyzed by Project Manager Eliza Wheeler. She noticed the trend in April, and a flood of reports followed through May. It soon became clear that she was witnessing a potentially deadly spike in heroin-related overdoses.

“The whole city is reporting strong stuff,” Wheeler told us. “People are overdosing left and right.”

From January through May, 99 heroin-related overdoses were reported. The largest number of overdoses occurred in May with a staggering 40 reports. Wheeler says that an average month has 12 overdoses.

While those directly involved with San Francisco’s drug-using population seem to know all about the increase in overdoses, city and hospital officials seem to know nothing about it.

After checking with local police precincts in drug zones such as the Mission and Tenderloin, SFPD spokesman Sgt. Michael Andraychak told us officers haven’t come in contact with a strong batch of heroin and they are unfamiliar with the term “gunpowder heroin.”

According to Tenderloin Police Captain John Garrity, undercover and street officers only test controlled substances for positive or negative results. They do not test the drugs’ potency or chemical make-up. Garrity told us that the cops haven’t dealt much with opiate-related overdoses since the widespread availability of naxolone, an opiate overdose antidote commonly known by its brand name Narcan.

“We don’t see the overdoses anymore,” Garrity told us, “not for the last 20 years, not since Narcan came out.”

SF General, St. Mary’s, and St. Francis hospitals all say their emergency rooms haven’t seen an increase in heroin overdoses either and are also unfamiliar with the term “gunpowder heroin.”

It seems the city is content with letting nonprofit needle exchanges and programs like the DOPE Project deal with its opiate-using population. Although the DPH does fund and collaborate with many service providers, it rests the bulk of the responsibility on the drug users themselves.

While needle exchange programs combat blood borne diseases like hepatitis C and HIV, which can be contracted through sharing needles and other paraphernalia, DOPE attempts to educate users and prevent fatal opiate overdoses. The DOPE Project, funded through DPH, works with needle exchange programs to provide opiate users with a take home prescription of naloxone, which can be administered from a nasal spray or injected from a vial. At the exchange, if a returning drug user is re-supplying naxolone, he or she is asked “Did you lose it or use it?” If it was used, a report is made.

All the reports gathered by the DOPE Project are of overdose reversals, none of the reports are fatal, thanks to widespread availability of naxolone and the drug using population who use it. That doesn’t mean people haven’t died. In fact, a rash of fatal overdoses is rumored to have occurred. The suspected culprit: gunpowder heroin.

“There’s a new batch of heroin in town—people are dying,” says Johnny Lorenz, community activist and member of San Francisco Drug Users Union, a members-based organization advocating drug-friendly policies and giving a voice to drug users, who say they are often marginalized and seen as not caring about their community.

Lorenz, a former heroin addict, says a friend recently died from heroin-related causes. Whether it was gunpowder heroin that actually caused his death is unknown.

Wheeler and Lorenz say many people have died from the extra-strength heroin, yet no official records have turned up. The Medical Examiner’s Office hasn’t noticed an increase in heroin-related deaths, but Administrator Bill Ahern admits it was 90 days backlogged on toxicology reports.

The police and medical examiner’s lack of knowledge doesn’t surprise Mary Howe, executive director at Homeless Youth Alliance. She says heroin-related overdoses are indeed a real problem, and she personally knows heroin users who have recently died from overdose, but “unless you actually care about helping drug users you wouldn’t know.” And to receive a toxicology report from the medical examiner’s office takes a couple months, adds Howe.

Wheeler and others are currently waiting on toxicology reports to find out what exactly is in the heroin making it so strong. Without a toxicology report there is no way to be certain about the cause of death or the makeup of the drug.

According to SF Medical Examiner’s 2009-2010 annual report, nine out of the 141 people that died from narcotic analgesics related deaths were found with traces of heroin, down from previous years. However, finding out if heroin is the cause of death can be tricky. According to the report, the unique metabolite that identifies heroin, 6-monoacetamorphine, is very short lived and can metabolize in the body while the person is dying—leaving only traces of morphine or codeine.

Worse, a drug user buying heroin off the street will never know what exactly he or she is shooting.

“No one ever knows what’s in the heroin,” says Lorenz, adding that the label “gunpowder” has become a loose term for a stronger heroin. Lorenz, who spent the majority of his 20s doing heroin, remembers that gunpowder heroin at one time used to be a specific reference to a higher grade heroin from Columbia, off-white or grayish in color and crystal-like—resembling gunpowder.

Others say gunpowder heroin is black tar heroin mixed with fentanyl, a synthetic opiate that can be up to 100 times stronger than morphine. Some disagree entirely and say the overdoses aren’t specific to any one type of heroin.

“Whatever people are calling it—it is strong,” says Wheeler adding that people rarely overdose from of a bad batch of heroin; they overdose from a good, strong batch. “In a world where the drug supplies are unregulated, this is what happens.”

If it is black tar heroin mixed with fentanyl, that could explain why hospitals aren’t reporting an increase in overdoses, says Jan Gurely, doctor at a local homeless clinic. She suggests that the people aren’t making it to the ER’s—they are only making it to the morgues.

“‘Gunpowder is very dangerous,” says Dr. Gurely. “It takes a phenomenal amount of antidote vials to reverse the overdose.”

Naxolone unbinds every molecule of heroin from receptors in the brain, reversing an overdose. The problem with naxolone is when too much is administered the overdose victim goes into withdrawal and comes to sick and vomiting. With a normal heroin overdose only half a vial is needed, but multiple vials are needed when dealing with gunpowder, she adds.

“A person could die on you with a vial in your hand,” Dr. Gurely said. “Most people don’t walk around with six or seven vials of Narcan.”

Pauli Gray believes the type of heroin causing a rash of overdoses and deaths is indeed heroin mixed with fentanyl. However, he doesn’t think it is a pure form of the prescription narcotic, but a homebrewed batch. Gray works for the Syringe Access Services program at the San Francisco AIDS Foundation and also works directly with Eliza Wheeler and the DOPE Program.

“It’s called gunpowder and it’s all over the place,” Gray said, adding that heroin users are now actively seeking the extra-strength street drug. “When they hear dealers yelling ‘gunpowder’ they run and buy it,” he said. The street value has skyrocketed. Normally, a gram of heroin sells for $30, gunpowder is selling for $80 a bag, says Gray, and the bag can weigh as little as a quarter of a gram.

Gray says users have learned to shoot up very small amounts of the drug, although rumors of fatal overdoses are rampant. The other day he saw the drug for the first time. It smelled like vitamins and when cooked up it has small black flecks floating around, he says.