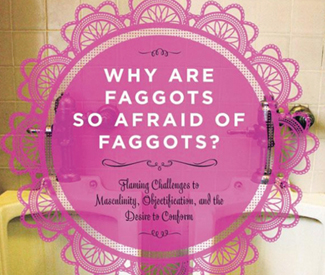 QUEER ISSUE “Right now it seems we have more in common with the Christian Right than the gay liberation movement. We’ve become so focused on marriage as the end-all and be-all of gay rights that it’s completely within the realm of possibility that the next leader of Focus on the Family could be a gay man. We all have to get married now for tax breaks, health care, or to stay in this country? Are you kidding me?” Mattilda Sycamore Bernstein spilled some truth into my hot pink Princess phone.

“I don’t know how we got to this position where we’re either agitating for more tax breaks for the rich via marriage, or we’re treating people like disposable objects on hookup sites because they don’t conform to certain standards. It’s really sickening. How does any of this further any agenda at all besides becoming what we’re supposed to be fighting against? I don’t get it.”

Sycamore Bernstein, who often writes for the Guardian, was speaking about the impetus behind her latest book, Why are Faggots So Afraid of Faggots? Flaming Challenges to Masculinity, Objectification, and the Desire to Conform (AK Press), an invigorating collection of essays from a vast variety of queer people that “challenges the assimilationist norms of a corporate-cozy lifestyle.” (Let’s just say that President Obama’s limp “evolution” on same-sex marriage was not going to be a topic of conversation.) From envisioning a more faggoty Internet and reclaiming perversity as a proud, queer norm to honestly exploring the complex cultural confusions that Western-originating political expressions of gayness can wreak on immigrant and native homos, Faggots goes there with inspiring directness.

“I wanted to put out something that captured the spectrum of radical queer thinking that’s been going on while it seems everyone else was in line to get married. There are so many topics that affect our lives that have just been completely bulldozed by the ‘gay rights’ corporate lobbying groups’ crazed marriagemania.

“For example, Chris Bartlett, in his contribution ‘Gravity and Levity’ talks about how the idea of ‘risk’ in the gay community has been so associated with AIDS that it may have pushed any aspiration towards risk — emotionally, politically, socially — right out of gay consciousness. Yet being gay used to be all about taking risks. It’s what got us so far in the first place!

“I think exploring how the medicalization of AIDS terminology may have numbed us from each other — or how race still defines us in the ‘community,’ or how every dollar sucked into the corporate marriage machine means less for those in need of actual life or death help, or how hate crimes legislation ridiculously puts more power and resources into the hands of the very system oppressing us — is something we desperately need right now. We’re raising an entire generation to think that marriage is the only fight. Meanwhile, we’re discriminating against ourselves in so many other ways.”

Faggots is no mere spitting into the wind, either. Although Sycamore Bernstein has been sounding the assimilationist alarm for years, the prolific author and activist, now living in Seattle, has been surprised by the tome’s positive reception. (“It’s quite shocking!” she says with a lilting laugh.) Edmund White, Samuel R. Delaney, and Mx Justin Vivian Bond offered blurbs, and younger readers and the press have been grabbing onto Faggots’ incendiary yet sophisticated tone. Could the recent wave of AIDS activist nostalgia and a Occupy-like disillusionment with big money Pride sponsorships (embodied locally, especially, by a Wells Fargo advertisement covering the entire front page of Bay Area Reporter’s Pride Issue and a Stoli-sponsored GLAAD Pride float) be buoying the book’s popularity?

“I think the re-emergence of interest in things like ACT UP is very interesting. When I came to San Francisco I was part of ACT UP, and — with everybody dying from drugs, suicide, and AIDS — there was a real drive to come together to confront this massive structural neglect and recognize how brutalities align themselves to bring about our annihilation. But nostalgia can be dangerous without recognizing the reality. There was a very real, very dangerous moment in the 1990s when activism suddenly became about discrimination in the military, of all things.

“It turned from trying to guarantee health care for all to being about whether or not we could go die faster in wars. Whose decision was that?”

Marke B. is the author of Queer: The Ultimate LGBT Gude for Youth (Zest)