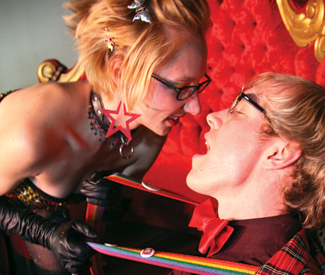 QUEER ISSUE Is San Francisco’s polyamorous community experiencing a renaissance? Pepper Mint, organizer of the recent sex education conference Open SF (www.open-sf.org), suspects the non-monogamous in the Bay Area have finally reached a critical mass. His proof? Over the weekend of June 8, OpenSF was attended by over 500 of the poly-curious and practicing.

It might be, however, that they’ve finally found something to relate to. Sonya Brewer, a somatic psychotherapist, OpenSF lecture facilitator, and queer woman of color, has been a practicing polyamorist for 15 years. Brewer pegged the high attendance numbers on Mint’s efforts to diversify the conference and include sexual minorities and other oppressed groups on its planning committee.

Those values were reflected in the conference’s keynote address, delivered by trans-identified sex educator Ignacio Rivera and transgender health educator and social justice activist Yoseñio V. Lewis. The two hosted a lecture entitled “Kink, Race, and Class,” which sought to inspire dialogue about how social forces play into the world of kink. It was one of the many unique talks over the weekend that both celebrated and critiqued the diversity and spread of the polyamorous community.

Looking over the list of lectures for the weekend — “Sex Work and Non-Monogamy,” “Fat Sluts, Hungry Virgins,” and “Trans Queering Your Sex,” to name a few — it was hard to decide which talks to attend.

I settled on two: Kathy Labriola’s “Unmasking the Green-Eyed Monster: Managing Jealousy in Open Relationships” and the Maggie Mayhem-led “Second Generation Poly.” Labriola’s hour-long talk examined jealousy from an anthropological perspective, highlighting it as a universal experience that manifests itself depending on one’s cultural upbringing. The bad news? Jealousy is unavoidable. The good news? It’s a learned behavior, and you can learn to manage it. Labriola provided us with a handy checklist to use in determining whether insecurities are based in fact or freak-out.

“Identify a situation that makes you jealous and ask the questions,” Labriola advised. “One, [do] I have a resource I value very much and I’m fearful of losing? Two, [does] another person wants that resource.? Three, [do] you believe you are in direct competition for something you want? Four, [do] you believe if push comes to shove you will lose out?” Unless you answered yes to all four, she counseled, your jealousy can be worked through.

Given the general focus of Open SF, Maggie’s key advice had resonance: “Be the author to your own happily ever after,” she told us.