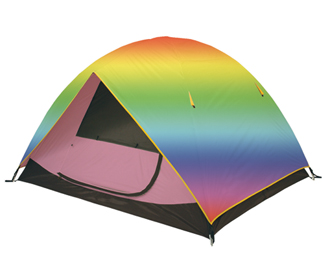 QUEER ISSUE “First of all, the parade wouldn’t have barricades, because that immediately creates an us versus them divide, and then you see the parade as just the groups and companies that can afford the fee, which is like $450. Anyone who wanted to march could march, regardless of what the sheriff or Fire Department says. There would be tents for connections to services that people desperately need. I’m not opposed to having companies there, but they shouldn’t be the be-all, end-all of Pride. And there should be more about the history, because people don’t know it. In the Holocaust, anywhere from 10,000 to 100,000 gays were worked to death in Dachau and other work camps. That’s where the pink triangle comes from. But people think Harvey Milk pulled it out of his ass or something.”

That’s what Scott Rossi, one of the organizers of San Francisco’s OccuPride march, told me when I asked him what his ideal SF Pride Parade would look like. The protest’s rallying cry is Community Not Commodity, and the group hopes to bring some rebellious spirit to the parade, which they say has become too watered down with corporate sponsors and assimiliation-lovin’ politics.

Some of the action’s organizers are from Occupy San Francisco and Occupy Oakland, but the majority are a coalition of radical queer groups like HAVOQ, Pride at Work, Act Up, and QUIT (Queers Undermining Israeli Terrorism).

Honestly, it would be weird if there wasn’t a group with an anti-capitalist critique of the parade disrupting Pride this year. It’s been a tradition since 1992 when Act Up members joined the parade and staged intermittent Die-Ins, collapsing every seven minutes, the frequency that people were dying from AIDS that year.

Act Up and related groups staged similar demonstrations practically every year. A decade later, two Gay Shame protesters were arrested when they attempted to enter the parade. That year’s parade was sponsored by Budweiser, and Gay Shame had created a seven-foot-tall cardboard Budweiser can that read “Vomit Out Budweiser Pride and the Selling of Queer Identities,” and other props to confront “the consumerism, blind patriotism and assimilationist agenda of the Pride Parade.”

And radical queers show no sign of stopping. Veteran gay rights warrior Tommi Mecca was at basically all of these disruptions, and he won’t be missing out on this year’s events. Mecca was 21 when he helped organize the first Pride March in Philadelphia in 1972.

“Pride used to be a protest,” Mecca recalls. “It was very free. There were no barricades on the street, there were very few rules. We didn’t have contingents, people just gathered, and at some point there were speeches, usually by activists…I don’t know when it started getting corporate sponsors.”

But the glitz! The glamour! The music enhanced by electricity! Today, Pride is a giant, televised affair — this year, sponsored by Wells Fargo.

“Don’t people in Pride realize how much we’re being used by Wells Fargo?” Mecca said. “It just reeks.”

So if you go to the parade, smell the sweet smell of protesters promoting “pride not profit, a movement not a market, and community not commodity.” After all, if it wasn’t for queer radicals in the ’70s, there wouldn’t be a Pride at all.