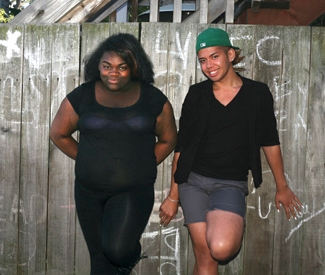 Noted queer writer and speaker Dan Savage sent a hopeful message to LGBT youth with his 2010 YouTube video, “It Gets Better.” But many queer youth in the Bay Area say they aren’t willing to wait.

“If my adult self could talk to my 14 year old self and tell him anything, I would tell him to really believe the lyrics from “Somewhere,” from West Side Story. There really is a place for us. There really is a place for you. And that one day you will have friends that love and support you, you will find love, you will find a community. And that life gets better,” Savage said.

Savage and his partner Terry Miller’s message went viral. It inspired hundreds of similar videos and eventually led to the creation of the It Gets Better Project, headquartered in Los Angeles. The videos were a response to a tragic cluster of suicides by children bullied for seeming gay, a trend that was only unusual in that the media picked up on it. And for many teens across the country, the “It Gets Better” videos provided crucial hope and support.

But last week, I was talking to Stephanie, Lolo, Ose, and Mia Tu Mutch, four Bay Area teens, about what its like to be a queer youth today. We were talking at the Lavender Youth Recreation and Information Center (LYRIC), a center for queer youth in the heart of the Castro.

“Those videos are depressing,” Lolo said.

“Just wait ’til you’re an adult, and your problems will go away,” Mia said, shaking her head.

“And it’s celebrities, too,” Ose noted. “‘I got thousands of dollars, and it gets better!'”

The four of them are facilitators at LYRIC, leading weekly community-building workshops that deal with issues queer kids face. Between 17 and 21 years old, these youth are not waiting for it to get better. They’re doing it for themselves.

LYRIC definitely promotes pride and empowerment. Founded in 1988, LYRIC organizers worked to secure funding for a physical space a few years later. Since then, this purple house on Collingwood has functioned as a crucial center for Bay Area queer youth. It offers counseling, food, clothing, community building workshops that kids teach, and a safe place to hang out.

But LYRIC, like many nonprofits, has felt the impact of the severe government cuts to health and human services. As a result, its budget has suffered steady declines from approximately $1.2 million in 2008 to $954,000 this, year primarily due to shrinking government funding.

But LYRIC refuses to give up offering paid internships, a rarity in the nonprofit world.

“The City has made it clear that they no longer intend to invest significant funding into subsidized employment model programs — they want to serve greater numbers of youth at a much lower unit cost — even if we all understand that some of the most marginalized youth will no longer be getting the intensive level of support they need to make it to a successful adulthood” LYRIC’s Executive Director Jodi Schwartz told me, explaining that the organization is now growing support by more grassroots funding networks.

The organization still serves about 400 young people per year.

Youth from across the country come to San Francisco seeking that community. Often they have escaped intolerant, abusive, or dangerous situations in their families or hometowns. But when they arrive in this storied city, these youth are often disappointed.

“I was that kid who left a small town in Texas and who got to San Francisco as fast as I could,” Mia told me. “And I was like, you know, I’ll figure it out, I’ll find a job, and I’ll do this and that. And it was really hard.”

” I think that the difference is that there are more LGBT specific languages and policies, and organizations that are affirming. All of that is the best in the US, probably,” Mia said. “And there are all these cultural groups and all of that. But queerphobia and transphobia exist here just like it exists everywhere else.”

“So my big thing is how we have all these systems in place that make us a little more queer friendly,” she said. “But how do we actually get the public to stop hating people, to stop doing hate crimes, to stop bullying?”

Ose, who now lives in the Bayview, grew up closer to the city. But coming from a religious family in Modesto, he says, “I had heard things about the Castro itself. I always thought the Castro was the devil…I was a church boy.”

He remembers fear that someone he knew would recognize him in the forbidden neighborhood, that “my mom would find out and be like, what are you doing in the Castro? So I was scared to death my parents would find out I was coming to the Castro.”

That was two years ago. Now, Ose works in the Castro, and he was dressed in cut-off shorts and a slicked back Mohawk, long painted nails clicking on the table. “I’m hella gayed out,” he happily reports.

When Mia made it to San Francisco, she initially settled into the Tenderloin, rather than the gentrifying Castro.

The Tenderloin is also the site of many of the services that queer youth use. Mia made some of her first local connections at Trans: Thrive, a program of the Asian Pacific Islander Center. And many of the kids at LYRIC, as well as the city’s other queer teens, benefit from Larkin Street Youth Services.

The homeless shelter oversees the only beds reserved for queer youth in the city, all 22 of them, a number Schwartz believes in inadequate. A report from Larkin Street in 2010 found that 30 percent of the homeless youth they serve identify as LGBTQQ (lesbian, gay, bisexual, transgender, queer, or questioning).

LYRIC is part of the Community Partnership for LGBTQQ Youth and the Dimensions Clinic Collaborative, which includes service organizations like the queer-specific health clinic Dimensions, the nearby LGBT Center, the Bay Area Young Positives HIV health and support nonprofit, and the city’s Department of Public Health. But LYRIC is one of only a few organizations that focuses on fun, informative community-building workshops.

Savage promised queer kids that, in the distant future, they would “have friends that love and support you, you will find love, you will find a community.” But LYRIC’s workshops, largely envisioned and run by the youth themselves, show kids that they don’t need to wait: they can create those supportive networks for themselves, in the here and now.

Another such community-building effort was on display at the LGBT Center on June 15: Youth Speaks’ queer poetry slam Queeriosity. The show, which was preceded by five weeks of free poetry workshops for and by queer youth, brought together young queer people from across the Bay Area, and one could feel the love and support in the air.

“Queeriosity is important because, in the poetry scene, we have so many people with so many different backgrounds,” Milani Pelley, one of the show’s hosts and a poet who works with youth in the workshops, told me. “A lot of times people who get identified in the LGBT category, they don’t have that space where they’re front and center and it’s a space for them. It’s very important that we celebrate everyone.”

Pelley, 24, has been working with Youth Speaks since she was 16. She said the message of the It Gets Better videos might be too simple.

“Thinking about being an adult versus a teenager, adults go through the same things,” she said. “The only difference is it’s not encouraged to speak out about it, you’re supposed to act like you have it together and it’s okay.”

Mia said youthful teasing and bullying are precursors to hate crimes: “Bullying and hate crimes are related because it’s all about people not accepting you, and then violently reacting to who are. So either throwing insults or beating you up.”

On April 29, Brandy Martell, an African American trans woman, was murdered in Oakland in a likely hate crime. CeCe McDonald’s recent case has also exhibited the dangers and injustice trans women of color face. The young Chicago woman defended herself against a bigoted attacker who she ended up killing, only to spend time in solitary confinement while awaiting trial, get convicted on manslaughter, and, last week, be placed in a men’s prison to serve her sentence.

I asked the four LYRIC teachers about the campaigns of national organizations like the Human Rights Committee — such as marriage equity or LGBT soldiers — and they all shook their heads.

“There’s a huge disconnect between the national platforms of the major gay organizations and the actual realities of queer youth,” Mia said. “Like they don’t even have queer youth in the majority of their meetings, but then they act like they’re the ones fighting for our rights, you know.”

Mia serves on the city’s Youth Commission, where she’s designing training programs for service providers to work with LGBT youth. Ose is working with Schwartz to create programming for LGBTQ youth who don’t want to take the common path of rejecting religion and spirituality as they come to terms with other parts of their identity.

“I go to church a lot,” Ose explained. “I grew up as a Christian. And I wanted to touch base on that because a lot of times, the youth that I come across, the majority of them are being silenced…I’m still going through some issues with my own church, especially with my pastor because just recently I’ve heard that he dislikes me over the fact of the way I dress, the way I act, my feminine gestures.”

Stephanie sighed and said, “I wish there were more LYRICS around the city. One in Bayview, one in every district. And Oakland too.”

“People who provide counseling, food, clothes, water if you need it,” Lola added. “A safe space to go to, a place where you can make friends, and make connections. There need to be more places like that specifically for queer youth.”

Even in San Francisco, harassment is a reality in youth programs and schools. In 2009, the SFUSD studied Youth Risk Behavior in San Francisco’s elementary through high school public schools, and found that more than 80 percent of students reported hearing anti-gay remarks at school, and more than 40 percent said they had never heard school staff stop others from making those remarks. The survey also found that students who identified as LGBT were significantly more likely than their peers to report skipping school out of concern for their safety.

Queer youth will never stop finding informal networks of support. But structured settings like LYRIC can be vital. At places like LYRIC, youth find the community, the love, and the friends that Savage promised would appear with time — before they turn 18.

“It’s easier to build relationships and to build community when its structured, when it has a little bit of structure like, hey, this is a queer specified setting, we’re going to talk to each other, we’re going to hang out, we’re gonna do this, and then you kind of build community off of that. And because it’s based on identity, you feel more comfortable to talk about that,” Mia explained. “You have to change your reality. And you have to be the one to change it for yourself. Because ain’t nobody gonna make it better for you.”