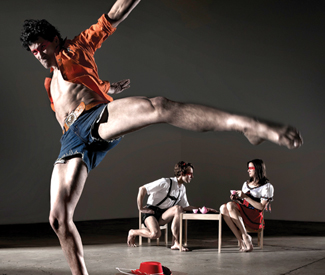 DANCE Anyone who watches dance — and perhaps any of the other arts — over a period of time will experience the excitement of discovery for one of two primary reasons. Proven choreographers may come up with fresh perspectives on who they are and what drives them. The voice may be familiar, but the intonation is new. Or you can have a first encounter with an artist who pushes you right to the edge of your seat — the work’s ingredients are good, but it’s the way they interlock or bounce off each other that makes you look forward to what else this person will come up with in the future.

Such was the case with Nicole Klaymoon, who founded her Embodiment Project company in 2009. For her latest project, House of Matter (performed at Dance Mission Theater June 8-10), she collaborated with jazz singer Valerie Troutt and her vocal ensemble, also founded in 2009. The result was one of the most rocking, joyous dance theater pieces that have hit the town in a long time.

Jamie Tracey’s multi-level panels, perhaps inspired by calligraphy, however, were not up to par; the set design was a weak link. Klaymoon is a writer, social activist, poet, performer, and dancer who grounds her choreography in modern and “urban” (read: hip-hop) styles. Troutt, who created House‘s musical universe, calls what she does house music, though to my ears it sounded more jazz and soul-influenced. Dance-y, however, it is.

“The body as our home” is one of those post-structuralist tropes that academia has bequeathed on us. In her opening spoken and danced monologue about “wanting to let you in” but not daring to do so, Klaymoon didn’t push it. The image of the house did set the tone — not for a series of narratives, but stories nonetheless. Jennifer “JenAy” Anolin and Rama Mahesh Hall longingly yanked and confronted each and yet separated. Ndubuisi Madu, rooted in place, popped so violently it seemed his limbs might fall off. When during Solas B. Lalgee’s ecstatic vocal solo he embraced Assad Conley, the moment was both grand and intimate. I can’t pretend to have followed the details of Troutt’s song cycle, which started with “Make Me Ovah” and ended with “Peace Lives Here,” but House‘s trajectory from tension to reconciliation flowed seamlessly.

The finale looked a bit too protracted and flirted with sentimentality. But there was something so grand and operatic about this house that became a home that I couldn’t help but feeling pulled in.

GOODE BUT NOT GREAT

Joe Goode has used the image of the body as a home — the only one we have — in many of his dances. In his latest, the house literally collapses on top of him. It’s a rickety, unstable lattice structure that is the visual focal point of the hour-long When We Fall Apart. Putting a libretto together from inquiries among acquaintances, Goode paints a multi-hued portrait of the dashed hopes and failed expectations that come with living. Looking around the audience, with just about every seat having a nametag on it, I couldn’t help but think but how many patrons could identify with those voices.

Goode’s ability to shed skins with but a few props kept me gasping and laughing at the same time. His splendily versatile dancers, with choreography in which they reached and stretched towards each other and some invisible goals on the ground and above, amplified the sense of life as inherently unstable. At one point they surrounded Goode as characters from his dreams. The scene looked like a merry-go-round. These days, performers Melecio Estrella and Damara Vita Ganley also shine vocally.

Still, with all its charm, wit and theatrical skill, Fall struck me as ultimately facile; its plaintive tune didn’t ring as true as others I have heard from Goode. *

‘WHEN WE FALL APART’