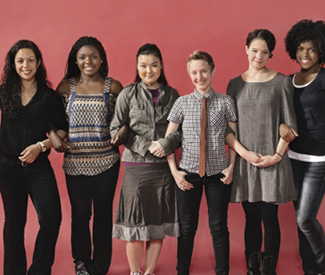 THEATER We’ve come a long way, baby, but why does it feel like women’s equality is a legal concept that still troubles the status quo? This past year has proven that the erosion of women’s rights remains a powerful political agenda across the country, with state bans on certain forms of abortion, the redefinition of rape, and the blocking of the Paycheck Fairness Act.

Two very different shows opening this week in Berkeley (previews began last week for both) are poised to provide timely additions to the ever-evolving discourse on female power and its reverberations on society at large. Mark Jackson’s Salomania, at the Aurora Theatre, and Eve Ensler’s Emotional Creature, at the Berkeley Rep, take on themes of gender parity and its embattled vanguard with a historical drama set in the early 1900s based on the life of one notorious woman, and an ensemble work exploring the challenges of girlhood in the present day.

Salomania, commissioned by Aurora, has been percolating on Jackson’s burner since 2006, when he directed Oscar Wilde’s Salome, also at the Aurora. While researching the production history of the play, he discovered a mostly forgotten scandal involving Maud Allan, a San Francisco dancer who achieved stardom with a provocative interpretation of “The Dance of the Seven Veils.” But it wasn’t her dancing that cemented her notoriety, but rather a high-profile media controversy in which she sued British M.P. Noel Pemberton Billing for libel after he accused her of being a lesbian (she was), a sadist (she wasn’t), and a German sympathizer (she wasn’t that either) after starring in a private performance of Wilde’s then-banned play.

Like all the best media scandals, her 1918 trial had all the necessary elements for a juicy celebrity circus — the personal vs. the political, beauty vs. bigotry, a titillating flush of sexual impropriety — and temporarily displaced the more austere wartime headlines of the era.

There are several themes at work in Jackson’s biographical drama, gleaned in part from courtroom transcripts and letters from Allan to her family, but the one that seems to best tie Allan together with her biblical muse is the emergence of the “independent” woman in popular culture, and the fearfulness they’ve inspired in their detractors throughout history. And just as New Testament figure Salome has been almost unanimously vilified by both church and secular society for her coerced display of her physical sensuality (almost more so than for her adolescent act of brutal vengeance), so was Allan maligned for her empathic recreation of same.

Both Jackson and Allan’s attitudes towards Salome accentuate the positive lurking within her oft-maligned reputation. Jackson posits that she’s “the only honest person in the room,” the one with the greatest potential for breaking free of the venal, decadent atmosphere of Herod’s palace. Allan found in her a kindred beauty-seeker, whose attraction to John the Baptist was formed partially from a sense of wonder at his purity and capacity for selflessness.

“She was not an uncouth child,” she protested at her libel trial. “She was a woman who valued beauty.” Their mutual reverence for beauty aside, another tie that binds Salome and Allan is a shared reputation for willfulness.

“She was kind of a force of nature in her personality,” Jackson says of Allan. “[And] without apology said, ‘This is what I do, and this is who I am’.” This unyielding attitude contributed to Allan’s reputation as “difficult,” even “arrogant,” a complexity of character that attracted Jackson’s interest as a playwright as much as it repelled her critics.

“Any woman with a forward personality who has pushed her boundaries is going to be characterized that way by her culture,” he muses, a sentiment that could be applied equally to Salome as well as to Allan, as well as to almost any controversial female celebrity today: our Madonnas and our Hillary Clintons.

“Part of why I wanted to write this is to say there’s this amazing resilience here, and power, and resistance, and energy and vitality in girls that we haven’t even begun to unleash,” says Eve Ensler, who has also been compared to a force of nature (by Berkeley Rep artistic director Tony Taccone). Best-known for The Vagina Monologues, Ensler’s latest play, Emotional Creature, is having its world premiere at Berkeley Rep.

Global girlhood is its focus. Based on her book I Am an Emotional Creature: The Secret Life of Girls Around the World, the subject matter includes stories from Congolese rape victims, Eastern European sex workers, young factory workers, and Western anorexics, all struggling to move forward from their circumstances. Despite the often violent circumstances Ensler’s protagonists find themselves in, it’s their vitality that she hopes will come across, onstage and off.

Quick to emphasize that Creature is fictional, Ensler’s encounters with young women around the world — Democratic Republic of Congo, South Africa, Sarajevo, Haiti, Afghanistan — have nonetheless heavily informed the characters of her piece. And of course, she has her own experiences in girlhood to draw from. “When I was younger, I was constantly told I was being too alive or too intense or too dramatic, and I chose to learn how to mute myself,” she says. An outspoken and prolific anti-violence advocate, Ensler does seem to have overcome that mute button in adulthood, but she’s quick to point out that its existence can make girlhood a bewildering, disempowering time in life.

The creation of the piece began in Johannesburg, with a staged workshop at the Market Theatre in July 2011, and another in Paris in September. Director Jo Bonney likens the shape of the play to that of an event being put on by the girls themselves: a variety show of monologues, ensemble pieces, even song and dance numbers, with music written by South African composer Charl-Johan Lingenfelder. Navigating the stormy seas of modern-day adolescence and young adulthood, Ensler’s “girls” may still be facing a whole spectrum of obstacles while tapping into their personal power. But thanks to precedents set by strong women such as Maud Allan, and even Salome, the fact that they should want to at all no longer seems unusual or unfortunate — no matter how often American right-wingers might have us otherwise believe. *