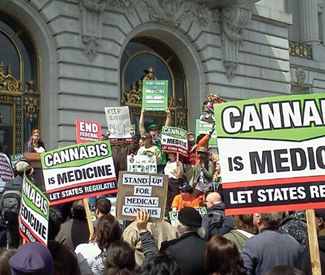 HERBWISE It is exceedingly difficult to get Oaksterdam University founder Richard Lee to talk about himself. I have him — the person who drove the Proposition 19 legalization campaign, whose house and cannabis trade school were raided by federal agents in April, who through his businesses’ success has helped revitalize and make safe a previously gloomy stretch of downtown Oakland — on the phone to talk about the lifetime achievement award he will be receiving from High Times at this week’s Cannabis Cup (Sat/23-Sun/24).

I want him to share his emotional journey since government agents poured into his home, what’s it’s like to be the public face of the flashpoint between California and national government over marijuana. High Times editorial director Malcolm MacKinnon calls Lee a “fearless trailblazer,” perhaps he’d like to make grand predictions about the future of pot? At least describe exactly what’s happening with Oaksterdam, post-raid. But Lee prefers to stress the latest poll numbers on legalization.

“All the national polls and the Colorado polls are going our way,” he says. “If you could get the word out about that, that’d be great.” FYI, on June 6 Rasmussen Reports found that 61 percent of Coloradoans support regulating cannabis like alcohol and cigarettes.

Lee has retired from university administration — he’s referred to as a professor emeritus, although he is still teaching classes in cannabis policy, history, and advocacy. In his “big Converse All-Stars” (as she calls them) now stands Dale Sky Jones. She once developed Oaksterdam’s curriculum and now joins a short list of female leaders in the marijuana industry as the university’s president.

“When the federal government came in, they took the curriculum, the computers — everything else that was the blood and breathe, heart and soul of the school short of the tables and chairs and teachers,” Jones says in a phone interview. Under her watch, the finances of “top-heavy” Oaksterdam’s gift shop, dispensary, and university have split and are now under separate ownership. Staff is attempting to rebuild curriculum from email records. 45 employees have lost their job because of the disruption in business affairs. “This was a violation on so many levels for the staff of Oaksterdam,” Jones says, sadly.

But life goes on. Lee says his “students are great, they have lots of energy and enthusiasm.” And the cultural contributions that the school and its founder have hardly been negated by federal intervention. “[Lee] brought the debate about marijuana policy reform to the kitchen table,” says Jones. “Before Prop. 19, the only time parents and kids had conversations around marijuana it was ‘where the hell did you find it? who are your jackass friends?’ It was always a negative discussion. This was the first time that families were able to discuss marijuana as a policy issue.”

This weekend’s Cannabis Cup will bring the pot world’s focus back here, as some of NorCal’s [author’s note: and hence, the world’s] best strains compete for the title of best indica, sativa, edibles, etc. Lee’s lifetime achievement award (presented at 7pm on Sun/24) will just confirm what we all already knew: even when it comes to activists, we grow things better out here.