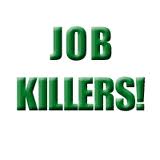 Why do Mayor Ed Lee, Board of Supervisors President David Chiu, and San Francisco’s two major daily newspapers want to punish success? Because that’s exactly what their proposal to create a new gross receipts tax for businesses – in which corporations would be taxed more as they grow, thus encouraging economic stagnation – would do.

Right now, the city taxes businesses through a payroll tax, levying taxes based on the number of employees the company has. But under a gross receipts tax that would replace the payroll tax, employees have a disincentive to be productive and efficient and increase their companies’ profits because that would expose those companies to more of the city’s onerous tax burden.

Why would investors and employees want to grow a business in San Francisco when that would only submit them to higher taxes. Clearly, this is anti-business measure that is likely to plunge our local economy back into the depths of the recession. Don’t our leaders understand the need to help this fragile economic recovery?

Okay, okay, in case you haven’t guessed it yet, the previous three paragraphs are satire of the ridiculously overblown and misleading political rhetoric used by Lee and other critics of the city’s payroll tax, which they deride as as “job killer” that makes companies not want to hire new employees.

“Mayor Lee and Board President David Chiu proposed a gross receipts tax as an alternative to the City’s current payroll tax, which punishes companies for growing and creating new jobs in San Francisco,” Lee’s office wrote in a press release it distributed last week.

Yet my argument that a gross receipts taxes “punishes companies for growing” is just as logically sound as Lee’s argument that the payroll tax discourages companies from “creating new jobs” – and both arguments are also complete hyperbolic bullshit. But it’s seductively simple and widely parroted bullshit.

“To attract more companies to San Francisco and encourage existing employers to hire more employees, it is past time to do away with this tax,” our new neighbors down the hall, the editors of the Examiner, wrote in their editorial today, a oft-repeatedly refrain from the Chronicle and SF Chamber of Commerce as well. It later added that switching tax methods “wouldn’t penalize companies for employing people or paying them well. And city policy wouldn’t give employers any incentive to shed employees during a downturn.”

But the reality is that the 1.5 percent payroll tax is too small to really be a factor in the decision by corporations to add new employees, something they are already loath to do unless forced to by rising demand. It is simply one imperfect gauge of the size of a company and its ability to pay local taxes, just as the gross receipts tax is.

Health insurance costs, which Lee’s CPMC deal doesn’t adequate contain, is a far bigger factor in a company’s hiring decisions. So is commercial rent, which Lee’s corporate welfare policies are causing to go up downtown and throughout the city.

For decades, conservatives have tried to sell the general public on bogus trickle down economic theories that we all benefit from corporate tax cuts and that people will simply stop working if you tax them, ideas that should have been discarded as they were discredited. But they’re back with a vengeance, in supposedly liberal San Francisco of all places, actively peddled by key Lee supporters like billionaire venture capitalist Ron Conway, who only recently dropped his Republican party affiliation in favor of declined to state.

But it’s time to call out this voodoo economics for what it is: self-serving bullshit that ought to be rejected by citizens of a city that prides itself as being more educated and enlightened than the rubes in the flyover states that have been so thoroughly manipulated by the Republican Party and Blue Dog Democrats, to the detriment of our entire country.

Now, the Examiner’s argument that the business tax reform proposal would broaden and stabilize the tax base is a sound and meaningful argument, which is why the concept enjoys widespread support from across the ideological spectrum and is worth doing (although progressives rightful argue that if the tax base is being broadened then the city should reap some benefits from that, logic that Lee inexplicably resists).

Yet as the City Hall debates that will shape the details of business tax reform begin in a couple of weeks, it’s time to drop this misleading “job killer” label that has been promulgated by Republicans and other fiscal conservatives over the last decade and have an honest debate over what’s best for San Francisco’s private and public sectors.